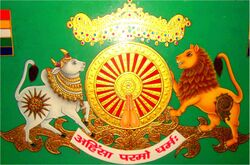 The respect for animal rights in Jainism, Hinduism, and Buddhism derives from the doctrine of ahimsa.[1][2]

In Hinduism, animals contain a soul just like humans; when sentient beings die, they can either be reincarnated as a human or as an animal.[3]

Almost every Jain community in India has established animal hospitals to care for injured and abandoned animals.[4] Many Jains also rescue animals from slaughterhouses.[4]

Hinduism teaches that a part of God resides in all living things, which forms the atman.[5] As such, reverence and respect for animals is taught.[5]

In Hinduism, many animals are venerated, including the tiger, the elephant, the mouse, and especially, the cow.[4]

Mahatma Gandhi is noted for his compassion to all living things; he advocated against animal experimentation and animal cruelty.[4]

Mahayana Buddhism teaches that "we can only escape our own suffering if we avoid inflicting it on others."[4] Mahayana Buddhists practice vegetarianism to this end.[4]