Short description: God of death in Turkic and Mongolic mythology 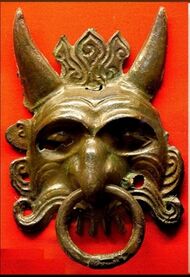 Door knocker in the form Erlik.

Erlik, Erlig, Erlik Khan, Erleg or Yerleg (Hungarian mythology equivalent to Ördög) is the god of death and the underworld, sometimes referred to as Tamag (hell) in Turkic mythology. Er (or yer) means Earth, in the depths of which Erlik lives in.[1] From the underworld, Erlik brings forth death, plague and evil spirits to torment humans and take their souls into his realm. Since Tengrism is not based on a written corpus but encompasses the experienced spiritual life of Turkic people, there are no unanimous beliefs among all Turkic people.

Erlik is sometimes considered to be the son of Ülgen, the nephew of Yer Tengri and the grandson of Kayra Han.

According to Siberian mythology, Erlik was the first creation of Ülgen/Ulgan, the creator god, but Erlik's pride led to friction between the two, and he was banished to the underworld.

In the myths of the Turkic and Mongolian peoples, Erlik was involved in the creation of humanity.[2] He slew the messenger-god, Maidere/Maydere, and is a teacher of sin. He is sometimes represented by a totemic bear.

In Turkic mythology, Erlik was the deity of evil, darkness, lord of the lower world and judge of the dead. He is known as the first of mankind, created by Ulgen. He wants to be equal to Ulgen, but is in a position inferior to him. Then he wanted to make his own land and was sent to the prison at the 9th layer of the earth and became opposed to the upper world, the realm of light. According to the Caucasians, Erlik resides in the deepest underworld in a palace of copper with furniture made of gold.[3]

According to an Altai legend, Erlik already created the spirits (İye), while he was still in heaven. Erlik and his spirits were cast out and fell to earth together, when he claimed divinity for himself.[4] Another legend of the Altai people recorded states, God (Tengri) endowed Erlik with a hammer and an anvil, but took his power away when Erlik was creating evil with it.[5]

According to another legend, recorded by Vasily Radlov, God ordered the first human to dive into the primordial water and remove a handful of soil from the bottom of the sea. The first human, however, desired to hide some soil in order to create his own world later. But the soil in his mouth grew and he spit it out. Kayra, who designs the world in this legend, cast the first human away from the heavenly realm as means of punishment and thus named him Erlik.[6]

In yet another narrative, people have been immortal before the advent of Erlik. People and animals overpopulated the world, until a crow suggested to summon Death into the world. So people summoned Erlik, whereupon death enters. First, all people knew when they would die, and so they lived in fear, until Tengri hide their date of death.[7]

The evil spirits created by Erlik cause misfortune, sickness and death to mankind. These spirits are imagined as Erlik's assistants. Besides these, his nine sons and daughters help their father in the way of evil. Erlik's daughters especially try to change a shaman's mind while he is attempting to reach Ulgen with their beauties. Erlik gives all kinds of sickness and wants sacrifices from the people. If they do not sacrifice to him, he catches the dead bodies of the people that he killed and takes them away to this lower world and then makes them his slaves. So, especially in the Altays, when sickness appears, people become scared of Erlik and make many animal sacrifices to him.[2]

In the prayers of shamans, Erlik is described as a monster, having the face and teeth of a pig combined with a human body. Besides his face, he is an old man with a well-built body, black eyes, eyebrows and mustache.

According to the Dolgans, Erlik took Mammoths down to the underworld. Whenever they try to get back to the surface, they freeze to death as punishment.[8]

The dinosaur Erlikosaurus is named after him.[9]

They are the sons of Erlik.

Erlik was worshipped in some traditional religions in Siberia and Central Asia, such as by Buryats. As Erlik is seen as the ruler of demons and the underworld, sacrifices are made for him to get rid of diseases or for the sake of people, who will enter the underworld after death.[11] Alternatively people sacrifice to Erlik in order to get a higher rank in his underworld. Shamans who venerate Erlik are called Black Shamans (kara kam). Their practise is usually frowned upon, since they negotiate with demonic spirits.[12] Erlik cannot claim every soul but only the evil ones. When a person dies, Erlik sends a kormos (some sort of ghost) in order to take the soul, simultaneously, heaven sends a spirit to carry the soul to heaven. The alignment of the soul determines the outcome of the struggle of these two spirits.[13] According to Verbitski, Turkic sources report that God once said to Erlik:

While some scholars believe that Erlik points to some sort of dualism between the divine heaven and the lower earth within Tengrist cosmology, others argue that Ülgan and Erlik are two rulers alongside Tengri, representing good and evil respectively.[15]