Religion:Feast of the Circumcision of Christ 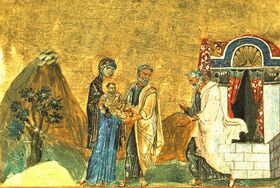 The Feast of the Circumcision of Christ is a Christian celebration of the circumcision of Jesus in accordance with Jewish tradition, eight days (according to the Semitic and southern European calculation of intervals of days)[1] after his birth, the occasion on which the child was formally given his name.[2][3]

The circumcision of Jesus has traditionally been seen, as explained in the popular 14th-century work the Golden Legend, as the first time the blood of Christ was shed, and thus the beginning of the process of the redemption of man, and a demonstration that Christ was fully human, and of his obedience to Biblical law.

The feast day appears on 1 January in the liturgical calendar of the Byzantine Catholic and Eastern Orthodox churches.[4] In the General Roman Calendar, the 1 January feast, which from 1568 to 1960 was called "The Circumcision of the Lord and the Octave of the Nativity", is now named the Solemnity of Mary, Mother of God, and the Octave Day of the Nativity of the Lord. It is celebrated by some churches of the Anglican Communion and virtually all Lutheran churches. In these latter Western Christian denominations, the Feast of the Naming and Circumcision of Jesus Christ marks the eighth day (octave day) of Christmastide.[5]

And when eight days were fulfilled to circumcise the child, his name was called Jesus, the name called by the angel before he was conceived in the womb.[6]

The feast is celebrated with an All-Night Vigil, beginning the evening of December 31. The hymns of the feast are combined with those for Saint Basil the Great. After the Divine Liturgy the next morning, Russian churches often celebrate a New Year Molieben (service of intercession) to pray for God's blessing for the beginning of the civil New Year (Byzantine Christians commemorate the Indiction, or Ecclesiastical New Year, on September 1). 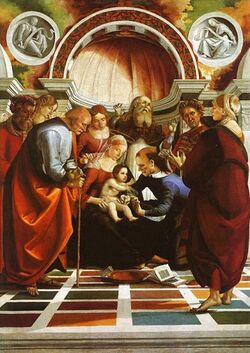 At an early stage the Church in Rome celebrated on 1 January a feast that it called the anniversary (Natale) of the Mother of God. When this was overshadowed by the feasts of the Annunciation and the Assumption, adopted from Constantinople at the start of the 7th century, 1 January began to be celebrated simply as the octave day of Christmas, the "eighth day" on which, according to Luke 2:21, the child was circumcised and given the name Jesus. In the 13th or 14th century 1 January began to be celebrated in Rome, as already in Spain and Gaul, as the feast of the Circumcision of the Lord and the Octave of the Nativity, while still oriented towards Mary and Christmas.[7] The emphasis that Saint Bernardine of Siena (1380–1444) laid on the name of Jesus in his preaching led in 1721 to the institution of a separate Feast of the Holy Name of Jesus. Pope John XXIII's 1960 rubrical and calendrical revision called 1 January simply the Octave of the Nativity. (This 1960 calendar was incorporated into the 1962 Roman Missal, whose continued use is authorized by the motu proprio Summorum Pontificum.) The 1969 revision states: "1 January, the Octave Day of the Nativity of the Lord, is the Solemnity of Mary, the Holy Mother of God, and also the commemoration of the conferral of the Most Holy Name of Jesus."[8] However, this does not apply to Masses using the 1962 Missal, where it remains a Holy Day of Obligation.[9]

The Anglican Communion's Book of Common Prayer liturgy celebrates this day as the Circumcision of Christ.

Since 2000, the Common Worship of the Church of England has listed this day as "The Naming and Circumcision of Jesus."

The Book of Common Prayer of the Anglican Church of Canada calls it "The Octave Day of Christmas, and the Circumcision of Our Lord, being New Year's Day".

The 1979 Book of Common Prayer of the Episcopal Church (United States) names this day "The Holy Name of Our Lord Jesus Christ", a Feast of the Lord.

A Prayer Book for Australia (1995) of the Anglican Church of Australia calls it "The Naming and Circumcision of Jesus".

Since it was a feast of Christ and related directly to Scriptural passages (notably Luke 2:21), the Feast of Circumcision was retained by churches of the Lutheran Reformation. It remains on most Lutheran liturgical calendars to this day, although there has been a general move to call it "The Name of Jesus."[10] Martin Luther preached at least one notable sermon on this feast day which is still available in his Church Postils, and up until the late 1970s, Lutheran hymn books would contain several hymns relating to this subject.