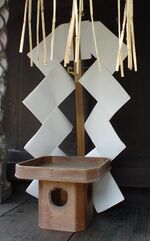 Gohei in front of Shinto shrine

The streamers are usually white, although they can also be gold, silver, or a mixture of several colors, and are often attached as decorations to straw ropes (shimenawa) used to mark sacred precincts.

The shrine priest or maiden attendants (miko) use the gohei to bless or sanctify a person or object in various Shinto rituals. The gohei is used for some ceremonies, but its usual purpose is to cleanse a sacred place in temples and to cleanse, bless, or exorcise any object that is thought to have negative energy. In addition to its use in purification rituals, it may be included in an Ōnusa (wooden wand with many shide), and serve as the object of veneration (shintai) in a Shinto shrine.