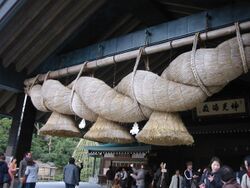 The biggest shimenawa at Izumo Taisha.

Shimenawa (標縄・注連縄・七五三縄, "enclosing rope") are lengths of laid rice straw or hemp[1] rope used for ritual purification in the Shinto religion. They can vary in diameter from a few centimetres to several metres, and are often seen festooned with shide. A space bound by shimenawa often indicates a sacred or pure space, such as that of a Shinto shrine.[2]

Shimenawa are believed to act as a ward against evil spirits and are often set up at a ground-breaking ceremony before construction begins on a new building. They are often found at Shinto shrines, torii gates, and sacred landmarks.

They are also used around yorishiro (objects capable of attracting spirits, hence inhabited by spirits). These notably include certain trees, in which case the inhabiting spirits are called kodama, and cutting down these trees is thought to bring misfortune. In cases of stones, the stones are known as iwakura (磐座、岩座).[3]

A variation of the shimenawa is used in sumo wrestling by yokozuna (grand champions) during their entrance ceremonies to denote their rank. This is because the yokozuna is seen as a living yorishiro (formally shintai), and as such is inhabited by a spirit.