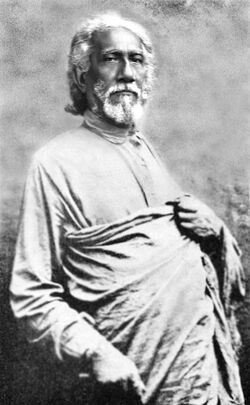 The Holy Science is a book written by Swami Sri Yukteswar Giri in 1894 under the title Kaivalya Darsanam. Sri Yukteswar states that he wrote The Holy Science at the request of Mahavatar Babaji.[1] The book compares parallel passages from the Bible and Upanishads in order to show the unity of all religions.[2][3]

In the introduction, Sri Yukteswar writes:

The book compares Sanskrit slokas to passages from the New Testament, especially the Book of Revelation. 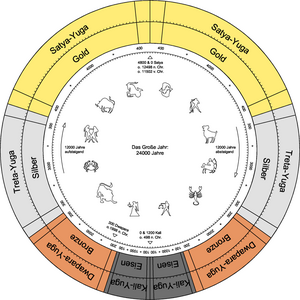 Equinox based eight-yuga cycle of time theorized by Sri Yukteswar.

Sri Yukteswar’s introduction to The Holy Science includes his explanation of the Yuga Cycle which differs from the traditional position because of his premise that the earth is now in the age of Dwapara Yuga, not the Kali Yuga that most Indian pundits believe to be the current age.[4] His theory is based on the idea that the sun “takes some star for its dual and revolves round it in about 24,000 years of our earth – a celestial phenomenon which causes the backward movement of the equinoctial points around the zodiac.”[1] The common explanation for this celestial phenomenon is precession, the ‘wobbling’ rotating movement of the earth axis. Research into Sri Yukteswar’s explanation is being conducted by the Binary Research Institute.

He further states that:

The sun also has another motion by which it revolves round a grand center called Vishnu-Naabhi which is the seat of the creative power Brahma, the universal magnetism. Brahma regulates Dharma the mental virtues of the internal world. When the sun in its revolution round its dual come to the place nearest to this grand center the seat of Brahma (an event which takes place when the autumnal equinox comes to the first point of Aries) Dharma the mental virtue becomes so much developed that man can easily comprehend all, even the mysteries of Spirit.[1]

In The Holy Science, Sri Yukteswar concludes that we are currently in the beginning stages of Dwapara Yuga, which began around 1699 A.D., moving closer to the grand center, and will pass into Treta Yuga around the year 4099 A.D.[1]

If we represent the yugas in a clock, the lowest spiritual time would be at 6 o'clock, approx. year 550 A.D., which is the center of Kali Yuga (more or less the Middle Ages), and the highest point is 12 o'clock, in the center of Satya Yuga (literally Age of Truth, as sat=truth), or Golden Age. It takes approx. 12,000 years from the lowest to the highest point, and about 24,000 in a complete turn. Now we would be at approx. 7 c'clock, ascending in Dwapara Yuga or Bronze Age which started in 1699.

[Note: The graphic to the right displays the Zodiac symbols in its inner circle based on their alignment with the Northern Hemisphere AUTUMNAL Equinox, NOT the Vernal Equinox. This is because the Great Year/Yuga Cycle commences when the Autumnal Equinox is aligned with the First Point of the Constellation Aries, as stated above (ref "The Holy Science" by Sri Yukteswar). Hence, they may appear to be rotated 180 degrees to those who normally use the Northern Hemisphere VERNAL Equinox as their reference point for the Zodiac 'Ages']