Religion:The Voice of the Silence 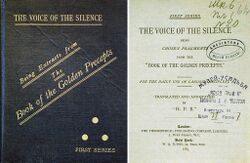 The Voice of the Silence presented by Blavatsky to Leo Tolstoy

The Voice of the Silence is a book by Helena Petrovna Blavatsky. It was written in Fontainebleau and first published in 1889.[1] According to Blavatsky, it is a translation of fragments from a sacred book she encountered during her studies in the East, called "The Book of the Golden Precepts".

The book is formed of three parts:

A reviewer for D. T. Suzuki's Eastern Buddhist Society commented: "Undoubtedly Madame Blavatsky had in some way been initiated into the deeper side of Mahayana teaching and then gave out what she deemed wise to the Western world..."[2] In the journal of the Buddhist Society, Suzuki commented: "here is the real Mahayana Buddhism".[3]

The 14th Dalai Lama wrote the preface for the centennial edition by Concord Grove Press.[4]