In graph theory the road coloring theorem, known until recently as the road coloring conjecture, deals with synchronized instructions. The issue involves whether by using such instructions, one can reach or locate an object or destination from any other point within a network (which might be a representation of city streets or a maze).[1] In the real world, this phenomenon would be as if you called a friend to ask for directions to his house, and he gave you a set of directions that worked no matter where you started from. This theorem also has implications in symbolic dynamics.

The theorem was first conjectured by Roy Adler and Benjamin Weiss (1970). It was proved by Avraham Trahtman (2009). 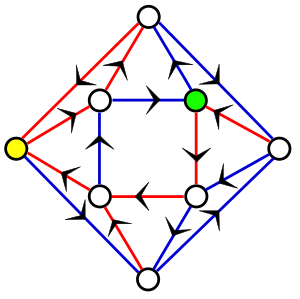 A directed graph with a synchronizing coloring

The road coloring theorem states that for a certain category of directed graphs, it is always possible to create such a coloring.

Let G be a finite, strongly connected, directed graph where all the vertices have the same out-degree k. Let A be the alphabet containing the letters 1, ..., k. A synchronizing coloring (also known as a collapsible coloring) in G is a labeling of the edges in G with letters from A such that (1) each vertex has exactly one outgoing edge with a given label and (2) for every vertex v in the graph, there exists a word w over A such that all paths in G corresponding to w terminate at v.

The terminology synchronizing coloring is due to the relation between this notion and that of a synchronizing word in finite automata theory.

Previous partial or special-case results include the following: