A skeuomorph (/ˈskjuːəˌmɔːrf, ˈskjuːoʊ-/)[1][2] is a derivative object that retains ornamental design cues (attributes) from structures that were inherent to the original.[3] Examples include pottery embellished with imitation rivets reminiscent of similar pots made of metal[4] and a software calendar that imitates the appearance of binding on a paper desk calendar.[5]

The term skeuomorph is compounded from skeuos (σκεῦος), meaning "container or tool", and morphḗ (μορφή), meaning "shape". It has been applied to material objects since 1890[6] and is now also used to describe computer and mobile interfaces.[7]

A similar alternative definition of skeuomorph is "a physical ornament or design on an object made to resemble another material or technique". This definition is broader in scope, as it can be applied to design elements that still serve the same function as they did in a previous design.

Skeuomorphs may be deliberately employed to make a new look more familiar and comfortable, or may be the result of cultural influences and norms on the designer. They may be artistic expression on the part of the designer.[7] The usability researcher and academic Don Norman describes skeuomorphism in terms of cultural constraints: interactions with a system that are learned only through culture. Norman also popularized perceived affordances, where the user can tell what an object provides or does based on its appearance, which skeuomorphism can make easy.[8]

The concept of skeuomorphism overlaps with other design concepts. Mimesis is an imitation, coming directly from the Greek word.[9] Archetype is the original idea or model that is emulated, where the emulations can be skeuomorphic.[10] Skeuomorphism is parallel to, but different from, path dependence in technology, where an element's functional behavior is maintained even when the original reasons for its design no longer exist. 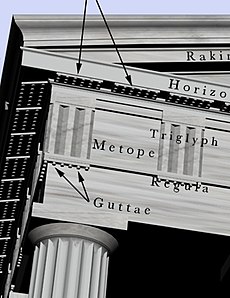 Triglyph and guttae in the Doric order; traditionally seen as recreating in stone functional features of the wooden Greek temples that preceded them.

Many features of wooden buildings were repeated in stone by the Ancient Greeks when they transitioned from wood to masonry construction. Decorative stone features in the Doric order of classical architecture in Greek temples such as triglyphs, mutules, guttae, and modillions are supposed to be derived from true structural and functional features of the early wooden temples. The triglyph and guttae are seen as recreating in stone functional features of the wooden temples that preceded them, respectively the carved beam-ends and six wooden pegs driven in to secure the beam in place.[11][12][13]

Historically, high-status items such as the Minoans' elaborate and expensive silver cups were recreated for a wider market using pottery, a cheaper material. The exchange of shapes between metalwork and ceramics, often from the former to the latter, is near-constant in the history of the decorative arts. Sometimes pellets of clay are used to evoke the rivets of the metal originals.[14]

There is also evidence of skeuomorphism in material transitions. Leather and pottery often carry over features from the wooden counterparts of previous generations. Clay pottery has also been found bearing rope-shaped protrusions, pointing to craftsmen seeking familiar shapes and processes while working with new materials.[12] In this context, skeuomorphs exist as traits sought in other objects, either for their social desirability or psychological comforts.[7]

In the modern era, cheaper plastic items often attempt to mimic more expensive wooden and metal products, though they are only skeuomorphic if new ornamentation references the original functionality,[15] such as molded screw heads in molded plastic items. Another well-known skeuomorph is the plastic Adirondack chair.[16] The physical "arm" lever on a "one-armed bandit" gambling machine is a skeuomorphic throwback feature on modern computerized slot machines, since it is no longer required to set physical mechanisms and gears into motion. Articles of clothing are also given skeuomorphic treatment as well, such as in the case of faux buckles in certain strap shoes like Mary Janes for small children who may be having difficulty with using an actual buckle, all while still retaining the original aesthetic.

Automotive design has historically been full of physical skeuomorphisms, such as thinly chrome-plated plastic components and imitation leather, gold, wood, pearl, or crystal jeweled elements. In the 1970s, opera windows and vinyl roofs on many luxury sedan cars imitated carriage work from the horse and buggy era. As of 2019[update], most electric cars feature prominent front grilles, even though there is little need for intake of air to cool an absent internal combustion engine.[17]

Many computer programs have a skeuomorphic graphical user interface that emulates the aesthetics of physical objects. Examples include a digital contact list resembling a Rolodex,[18] and IBM's 1998 RealThings package.[19] A more extreme example is found in some music synthesis and audio processing software packages, which closely emulate physical musical instruments and audio equipment complete with buttons and dials.[20] On a smaller scale, the icons of GUIs may remain skeuomorphic representations of physical objects that are not longer directly applicable to the task they represent (such as a drawing of a floppy disk to represent "save").

Apple Inc., while under the direction of Steve Jobs, was known for its wide usage of skeuomorphic designs in various applications. This changed after Jobs' death when Scott Forstall, described as "the most vocal and high-ranking proponent of the visual design style favored by Mr. Jobs", resigned. Apple designer Jonathan Ive took over some of Forstall's responsibilities and had "made his distaste for the visual ornamentation in Apple's mobile software known within the company".[21] With the announcement of iOS 7 at WWDC in 2013, Apple officially shifted from skeuomorphism to a more simplified design, thus beginning the so-called "death of skeuomorphism" at Apple.[22]

Other virtual skeuomorphs do not employ literal images of some physical object; but rather allude to ritual human heuristics or heuristic motifs, such as slider bars that emulate linear potentiometers[20] and visual tabs that behave like physical tabbed file folders. Another example is the swiping hand gesture for turning the "pages" or screens of a tablet display.[23][24]

Virtual skeuomorphs can also be auditory. The shutter-click sound emitted by most camera phones when taking a picture is an auditory skeuomorph,[25] though it has also been deemed necessary for legal reasons especially due to voyeurism and child predator concerns.[26]

Retrofuturism incorporates spatial motifs from previous iterations of the future; especially visions of electro-industrialism.[27] This is frequently incorporated in retrowave or synthwave illustrations. Skeumorphic time is closely linked with metamodernism.

Skeuomorphic design seems to be preferred by older recipient groups often referred to as digital immigrants while digital natives tend to favor flat design over skeuomorphisms. However, younger people are still able to understand the signifiers that skeuomorphic design employs. A better user experience could be measured for each respective design philosophy among digital natives and immigrants.[28]

Although it is often proven that digital immigrants are more likely able to perceive and understand all available functions in an application, it has been found out that some affordances that do not have direct signifiers e.g. the function to flip pages in an ebook by simple swiping from right to left are less likely to be found by older users. However, all associated Functions should be included when a certain metaphor is used. For example users are likely to feel frustrated when trying to pull a file into the trash bin only to find out that this gesture does not delete the file.[29]

An argument in favor of skeuomorphic design is that it makes it easier for those familiar with the original device to use the digital emulation by making certain signifiers to affordances stronger. Interactions with computer devices are mostly cultural and learned. Once a process is learned and adopted in a society, it develops persistence. Proposals for change, especially radical change, often result in debate between proponents and opponents. Don Norman describes this process as a form of cultural heritage.[8]

In the case of an electric tea kettle, such designs can be dangerous. If it is used in the manner of the original tea kettles, catastrophe can ensue if user places it on active fire, resulting in property damage or injury.