Short description: Academic tertiary education, such as from colleges and universities 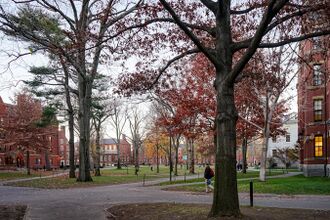 Harvard University, an Ivy League university in the United States, routinely ranks as one of the best institutions of higher learning in the world.[1]

The right of access to higher education is mentioned in a number of international human rights instruments. The United Nations International Covenant on Economic, Social and Cultural Rights of 1966 declares, in Article 13, that "higher education shall be made equally accessible to all, on the basis of capacity, by every appropriate means, and in particular by the progressive introduction of free education". In Europe, Article 2 of the First Protocol to the European Convention on Human Rights, adopted in 1950, obliges all signatory parties to guarantee the right to education.

The International Standard Classification of Education in 1997 initially classified all tertiary education together in 1997 version of its schema. They were referred to as level 5 and doctoral studies at level 6. In 2011, this was refined and expanded 2011 version of the structure. Higher education at undergraduate level, masters and doctoral level became levels 6, 7 and 8. Non-degree level Tertiary education, sometimes referred to as further education or continuing education was reordered ISCED 2011 level 4, with level 5 for some higher courses.[2]

In the days when few pupils progressed beyond primary education or basic education, the term "higher education" was often used to refer to secondary education, which can create some confusion.[note 1] This is the origin of the term high school for various schools for children between the ages of 14 and 18 (United States) or 11 and 18 (UK and Australia).[3] 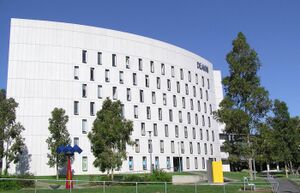 In the US, higher education is provided by universities, academies, colleges, seminaries, conservatories, and institutes of technology, and certain college-level institutions, including vocational schools, universities of applied sciences, trade schools, and other career-based colleges that award degrees. Tertiary education at non-degree level is sometimes referred to as further education or continuing education as distinct from higher education.[4][5]

Within the realm of teaching, it includes both the undergraduate level, and beyond that, graduate-level (or postgraduate level). The latter level of education is often referred to as graduate school, especially in North America. In addition to the skills that are specific to any particular degree, potential employers in any profession are looking for evidence of critical thinking and analytical reasoning skills, teamworking skills, information literacy, ethical judgment, decision-making skills, fluency in speaking and writing, problem solving skills, and a wide knowledge of liberal arts and sciences.[7]

The oldest known institutions of higher education are credited to Dynastic Egypt, with Pr-Anx (houses of life) built as libraries and scriptorium, containing works on law, architecture, mathematics, and medicine, and involved in the training of "swnw" and "swnwt" (male and female Doctors); extant Egyptian papyri from the 3rd millennia BC, are in several collections.[8]

In the Greek world, Plato's Academy (c. 387 - 86 BC), Aristotle's Lycaeum (c. 334 - 86 BC) and other philosophical-mathematical schools became models for other establishments, particularly in Alexandria of Egypt, under the Ptolemies.

In South Asia, the city of Takṣaśilā, later the great Buddhist monastery of Nālandā (c. 427 - 1197 CE), attracted students and professors even from distant regions.[9]

In China, the Han dynasty established chairs to teach the Five Confucean Classics, in the Grand School, Taixue (c. 3 - 1905 CE), to train cadres for the imperial administration.[10][11] All these higher-learning institutions became models for other schools within their sphere of cultural influence.

In 425 CE, the Byzantine emperor Theodosius II innovated as he established the Pandidakterion, with a faculty of 31 professors, to train public servants. In the 7th and 8th centuries, "cathedral schools" were created in Western Europe. Meanwhile, the first Medresahs were founded in the Moslem empire – initially mere primary schools in the premises of major mosques, which gradually evolved toward secondary, later higher education. However high the intellectual level of these schools could be, it would be anachronistic to call them "universities". Their organization and purposes were markedly different from the corporations of students and teachers, independent from both the Church and the State, which established themselves from the 12th century in Western Europe as Universitas Studiorum.

Since World War II, developed and many developing countries have increased the participation of the age group who mostly studies higher education from the elite rate, of up to 15 per cent, to the mass rate of 16 to 50 per cent.[20][21][22] In many developed countries, participation in higher education has continued to increase towards universal or, what Trow later called, open access, where over half of the relevant age group participate in higher education.[23] Higher education is important to national economies, both as an industry, in its own right, and as a source of trained and educated personnel for the rest of the economy. College educated workers have commanded a measurable wage premium and are much less likely to become unemployed than less educated workers.[24][25]

In recent years, universities have been criticized for permitting or actively encouraging grade inflation.[26][27] Also, the supply of graduates in many fields of study is exceeding the demand for their skills, aggravating graduate unemployment, underemployment, overqualification, credentialism and educational inflation.[28][29] Some commentators have suggested that the impact of the COVID-19 pandemic on education is rapidly making certain aspects of the traditional higher education system obsolete.[30]

Types of provider in the United States

The general higher education and training that takes place in a university, college, or Institute of technology usually includes significant theoretical and abstract elements, as well as applied aspects (although limited offerings of internships or SURF programs attempt to provide practical applications). In contrast, the vocational higher education and training that takes place at vocational universities and schools usually concentrates on practical applications, with very little theory.

In addition, professional-level education is always included within Higher Education, and usually in graduate schools since many postgraduate academic disciplines are both vocationally, professionally, and theoretically/research oriented, such as in the law, medicine, pharmacy, dentistry, and veterinary medicine. A basic requirement for entry into these graduate-level programs is almost always a bachelor's degree, although alternative means of obtaining entry into such programs may be available at some universities. Requirements for admission to such high-level graduate programs is extremely competitive, and admitted students are expected to perform well. 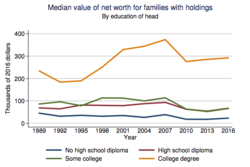 Mean financial wealth of US families by education of the head of household, 1989-2010 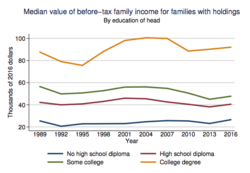 Mean income of US families by education of the head of household, 1989-2010

When employers in any profession consider hiring a college graduate, they are looking for evidence of critical thinking, analytical reasoning skills, teamworking skills, information literacy, ethical judgment, decision-making skills, communication skills (using both text and speech), problem solving skills, and a wide knowledge of liberal arts and sciences. However, most employers consider the average graduate to be more or less deficient in all of these areas.[31][32][33]

In the United States, there are large differences in wages and employment associated with different degrees. Medical doctors and lawyers are generally the highest paid workers, and have among the lowest unemployment rates. Among undergraduate fields of study, science, technology, engineering, math, and business generally offer the highest wages and best chances of employment, while education, communication, and liberal arts degrees generally offer lower wages and a lower likelihood of employment.[24][34]

Teaching engineering is teaching the application of scientific, economic, social, and practical knowledge in order to design, build, maintain, and improve structures, machines, devices, systems, materials and processes. It may encompass using insights to conceive, model and scale an appropriate solution to a problem or objective. The discipline of engineering is extremely broad, and encompasses a range of more specialized fields of engineering, each with a more specific emphasis on particular areas of technology and types of application. Engineering disciplines include aerospace, biological, civil, chemical, computer, electrical, industrial and mechanical.

The performing arts differ from the plastic arts or visual arts, insofar as the former uses the artist's own body, face and presence as a medium; the latter uses materials such as clay, metal or paint, which can be molded or transformed to create a work of art.

The plastic arts or visual arts are a class of art forms, that involve the use of materials, that can be moulded or modulated in some way, often in three dimensions. Examples are painting, sculpture, and drawing.

Higher educational institutions in these arts include film schools and art schools.

This describes a distinct form of higher education that offers a particularly intense integration with the world of work in all its aspects (including teaching, learning, research and governance) and at all levels of the overarching Qualifications Framework of the European Higher Education Area. Its function is to diversify learning opportunities, enhance employability, offer qualifications and stimulate innovation, for the benefit of learners and society.

The intensity of integration with the world of work (which includes enterprise, civil society and the public sector) is manifested by a strong focus on application of learning. This approach involves combining phases of work and study, a concern for employability, cooperation with employers, the use of practice-relevant knowledge and use-inspired research.[35]

A 2014 report by the Organisation for Economic Co-operation and Development states that by 2014, 84 percent of young people were completing upper secondary education over their lifetimes, in high-income countries. Tertiary-educated individuals were earning twice as much as median workers. In contrast to historical trends in education, young women were more likely to complete upper secondary education than young men. Additionally, access to education was expanding and growth in the number of people receiving university education was rising sharply. By 2014, close to 40 percent of people aged 25–34 (and around 25 percent of those aged 55–64), were being educated at university.[36]

The Lisbon Recognition Convention stipulates that degrees and periods of study must be recognised in all of the Signatory Parties of the convention.[37]