In statistics and data analysis, the application software SegReg is a free and user-friendly tool for linear segmented regression analysis to determine the breakpoint where the relation between the dependent variable and the independent variable changes abruptly.[1]

Segmented regression of residuals on number of irrigations. Confidence intervals are shown. 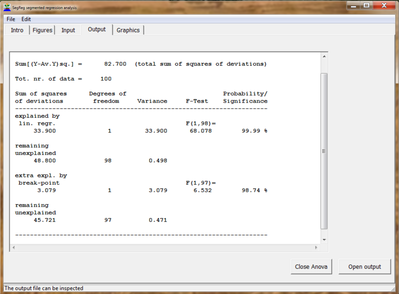 To complete the confidence statements, SegReg provides an analysis of variance and an Anova table.[3]

A list of publications in which SegReg is used can be consulted.[5]

When only one independent variable is present, the results may look like:

Substituting the expressions of RY in the second set of equations into the first set yields: 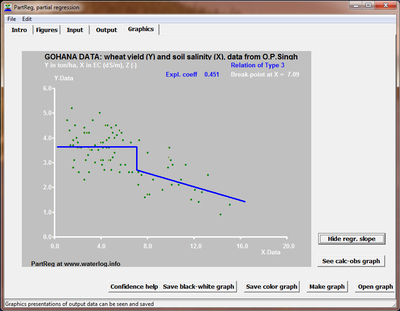 As an alternative to regressions at both sides of the breakpoint (threshold), the method of partial regression can be used to find the longest possible horizontal stretch with insignificant regression coefficient, outside of which there is a definite slope with a significant regression coefficient. The alternative method can be used for segmented regressions of Type 3 and Type 4 when it is the intention to detect a tolerance level of the dependent variable for varying quantities of the independent, explanatory, variable (also called predictor).[6]

The attached figure concerns the same data as shown in the blue graph in the infobox at the top of this page. Here, the wheat crop has a tolerance for soil salinity up to the level of EC=7.1 dS/m instead of 4.6 in the blue figure. However, the fit of the data beyond the threshold is not as well as in the blue figure that has been made using the principle of minimization of the sum of squares of deviations of the observed values from the regression lines over the whole domain of explanatory variable X (i.e. maximization of the coefficient of determination), while the partial regression is designed only to find the point where the horizontal trend changes into a sloping trend.