Short description: Range of estimates for an unknown parameter 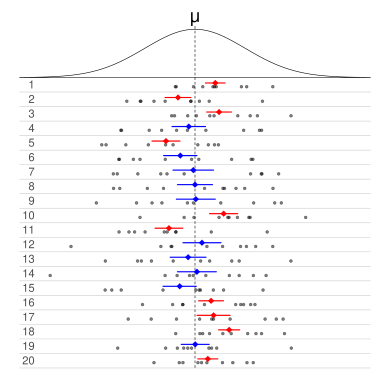 Each row of points is a sample from the same normal distribution. The colored lines are 50% confidence intervals for the mean, μ. At the center of each interval is the sample mean, marked with a diamond. The blue intervals contain the mean, and the red ones do not.

Let X be a random sample from a probability distribution with statistical parameter θ, which is a quantity to be estimated, and φ, representing quantities that are not of immediate interest. A confidence interval for the parameter θ, with confidence level or confidence coefficient γ, is an interval with random endpoints (u(X), v(X)), determined by the pair of random variables u(X) and v(X), with the property:

Here Prθ,φ indicates the probability distribution of X characterised by (θ, φ). An important part of this specification is that the random interval (u(X), v(X)) covers the unknown value θ with probability γ no matter what the true value of θ actually is. There is no way of knowing whether an individual confidence interval that has been computed covers (includes) θ. However, the procedure guarantees (if statistical assumptions are met) that each time we collect a random sample to estimate a parameter, we have probability γ that the confidence interval we compute will cover θ.[2]

to an acceptable level of approximation. Alternatively, some authors[6] simply require that

which is useful if the probabilities are only partially identified or imprecise, and also when dealing with discrete distributions. Confidence limits of form

are called conservative;[7] accordingly, one speaks of conservative confidence intervals and, in general, regions.

When applying standard statistical procedures, there will often be standard ways of constructing confidence intervals. These will have been devised so as to meet certain desirable properties, which will hold given that the assumptions on which the procedure rely are true. These desirable properties may be described as: validity, optimality, and invariance. Of these "validity" is most important, followed closely by "optimality". "Invariance" may be considered as a property of the method of derivation of a confidence interval rather than of the rule for constructing the interval. In non-standard applications, the same desirable properties would be sought.

For non-standard applications, there are several routes that might be taken to derive a rule for the construction of confidence intervals. Established rules for standard procedures might be justified or explained via several of these routes. Typically a rule for constructing confidence intervals is closely tied to a particular way of finding a point estimate of the quantity being considered.

Summary statistics
This is closely related to the method of moments for estimation. A simple example arises where the quantity to be estimated is the population mean, in which case a natural estimate is the sample mean. Similarly, the sample variance can be used to estimate the population variance. A confidence interval for the true mean can be constructed centered on the sample mean with a width which is a multiple of the square root of the sample variance.
Likelihood theory
Estimates can be constructed using the maximum likelihood principle, the likelihood theory for this provides two ways of constructing confidence intervals or confidence regions for the estimates.
Estimating equations
The estimation approach here can be considered as both a generalization of the method of moments and a generalization of the maximum likelihood approach. There are corresponding generalizations of the results of maximum likelihood theory that allow confidence intervals to be constructed based on estimates derived from estimating equations.
Hypothesis testing
If hypothesis tests are available for general values of a parameter, then confidence intervals/regions can be constructed by including in the 100p% confidence region all those points for which the hypothesis test of the null hypothesis that the true value is the given value is not rejected at a significance level of (1 − p).[8]
Bootstrapping
In situations where the distributional assumptions for that above methods are uncertain or violated, resampling methods allow construction of confidence intervals or prediction intervals. The observed data distribution and the internal correlations are used as the surrogate for the correlations in the wider population.

has a Student's t distribution with n − 1 degrees of freedom.[9] Note that the distribution of T does not depend on the values of the unobservable parameters μ and σ2; i.e., it is a pivotal quantity. Suppose we wanted to calculate a 95% confidence interval for μ. Then, denoting c as the 97.5th percentile of this distribution,

and we have a theoretical (stochastic) 95% confidence interval for μ.

After observing the sample we find values x for X and s for S, from which we compute the confidence interval

In each of the above, the following applies: If the true value of the parameter lies outside the 95% confidence interval, then a sampling event has occurred (namely, obtaining a point estimate of the parameter at least this far from the true parameter value) which had a probability of .05 (or less) of happening by chance.

Confidence intervals and levels are frequently misunderstood, and published studies have shown that even professional scientists often misinterpret them.[13][14][15][16][17][18]

Deborah Mayo expands on this further as follows:[21]

"It must be stressed, however, that having seen the value [of the data], Neyman–Pearson theory never permits one to conclude that the specific confidence interval formed covers the true value of 0 with either (1 − α)100% probability or (1 − α)100% degree of confidence. Seidenfeld's remark seems rooted in a (not uncommon) desire for Neyman–Pearson confidence intervals to provide something which they cannot legitimately provide; namely, a measure of the degree of probability, belief, or support that an unknown parameter value lies in a specific interval. Following Savage (1962), the probability that a parameter lies in a specific interval may be referred to as a measure of final precision. While a measure of final precision may seem desirable, and while confidence levels are often (wrongly) interpreted as providing such a measure, no such interpretation is warranted. Admittedly, such a misinterpretation is encouraged by the word 'confidence'."

However, when [math]\displaystyle{ |X_1-X_2| \geq 1/2 }[/math], intervals from the first procedure are guaranteed to contain the true value [math]\displaystyle{ \theta }[/math]: Therefore, the nominal 50% confidence coefficient is unrelated to the uncertainty we should have that a specific interval contains the true value. The second procedure does not have this property.

Moreover, when the first procedure generates a very short interval, this indicates that [math]\displaystyle{ X_1,X_2 }[/math] are very close together and hence only offer the information in a single data point. Yet the first interval will exclude almost all reasonable values of the parameter due to its short width. The second procedure does not have this property.

The two counter-intuitive properties of the first procedure—100% coverage when [math]\displaystyle{ X_1,X_2 }[/math] are far apart and almost 0% coverage when [math]\displaystyle{ X_1,X_2 }[/math] are close together—balance out to yield 50% coverage on average. However, despite the first procedure being optimal, its intervals offer neither an assessment of the precision of the estimate nor an assessment of the uncertainty one should have that the interval contains the true value.

Steiger[28] suggested a number of confidence procedures for common effect size measures in ANOVA. Morey et al.[19] point out that several of these confidence procedures, including the one for ω2, have the property that as the F statistic becomes increasingly small—indicating misfit with all possible values of ω2—the confidence interval shrinks and can even contain only the single value ω2 = 0; that is, the CI is infinitesimally narrow (this occurs when [math]\displaystyle{ p\geq1-\alpha/2 }[/math] for a [math]\displaystyle{ 100(1-\alpha)\% }[/math] CI).

This behavior is consistent with the relationship between the confidence procedure and significance testing: as F becomes so small that the group means are much closer together than we would expect by chance, a significance test might indicate rejection for most or all values of ω2. Hence the interval will be very narrow or even empty (or, by a convention suggested by Steiger, containing only 0). However, this does not indicate that the estimate of ω2 is very precise. In a sense, it indicates the opposite: that the trustworthiness of the results themselves may be in doubt. This is contrary to the common interpretation of confidence intervals that they reveal the precision of the estimate.