Short description: Speed that exceeds the speed of sound 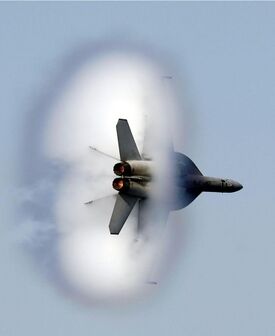 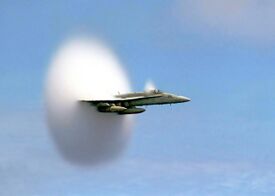 U.S. Navy F/A-18 approaching the sound barrier. The white cloud forms as a result of the supersonic expansion fans dropping the air temperature below the dew point.[1][2]

Supersonic speed is the speed of an object that exceeds the speed of sound (Mach 1). For objects traveling in dry air of a temperature of 20 °C (68 °F) at sea level, this speed is approximately 343.2 m/s (1,126 ft/s; 768 mph; 667.1 kn; 1,236 km/h). Speeds greater than five times the speed of sound (Mach 5) are often referred to as hypersonic. Flights during which only some parts of the air surrounding an object, such as the ends of rotor blades, reach supersonic speeds are called transonic. This occurs typically somewhere between Mach 0.8 and Mach 1.2.

Sounds are traveling vibrations in the form of pressure waves in an elastic medium. Objects move at supersonic speed when the objects move faster than the speed at which sound propagates through the medium. In gases, sound travels longitudinally at different speeds, mostly depending on the molecular mass and temperature of the gas, and pressure has little effect. Since air temperature and composition varies significantly with altitude, the speed of sound, and Mach numbers for a steadily moving object may change. In water at room temperature supersonic speed can be considered as any speed greater than 1,440 m/s (4,724 ft/s). In solids, sound waves can be polarized longitudinally or transversely and have even higher velocities.

Supersonic fracture is crack motion faster than the speed of sound in a brittle material.

At the beginning of the 20th century, the term "supersonic" was used as an adjective to describe sound whose frequency is above the range of normal human hearing. The modern term for this meaning is "ultrasonic".

Etymology: The word supersonic comes from two Latin derived words; 1) super: above and 2) sonus: sound, which together mean above sound, or faster than sound. 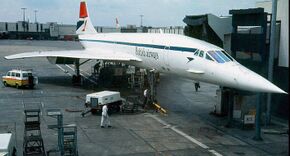 The tip of a bullwhip is thought to be the first object designed to break the sound barrier, resulting in the telltale "crack" (actually a small sonic boom). The wave motion travelling through the bullwhip is what makes it capable of achieving supersonic speeds.[3][4] However, the first man-made supersonic boom was likely caused by a piece of cloth, spurring the whip's eventual development.[5]

Most modern firearm bullets are supersonic, with rifle projectiles often travelling at speeds approaching and in some cases[6] well exceeding Mach 3.

Most spacecraft, most notably the Space Shuttle are supersonic at least during portions of their reentry, though the effects on the spacecraft are reduced by low air densities. During ascent, launch vehicles generally avoid going supersonic below 30 km (~98,400 feet) to reduce air drag.

When an inflated balloon is burst, the torn pieces of latex contract at supersonic speed, which contributes to the sharp and loud popping noise.

To date, only one land vehicle has officially travelled at supersonic speed, the ThrustSSC. The vehicle, driven by Andy Green, holds the world land speed record, having achieved an average speed on its bi-directional run of 1,228 km/h (763 mph) in the Black Rock Desert on 15 October 1997.

The Bloodhound LSR project planned an attempt on the record in 2020 at Hakskeenpan in South Africa with a combination jet and hybrid rocket propelled car. The aim was to break the existing record, then make further attempts during which [the members of] the team hope to reach speeds of up to 1,600 km/h (1,000 mph). The effort was originally run by Richard Noble who was the leader of the ThrustSSC project, however following funding issues in 2018, the team was bought by Ian Warhurst and renamed Bloodhound LSR. Later the project was indefinitely delayed due to the Covid-19 pandemic and the vehicle was put up for sale.

The aerodynamics of supersonic aircraft is simpler than subsonic aerodynamics because the airsheets at different points along the plane often cannot affect each other. Supersonic jets and rocket vehicles require several times greater thrust to push through the extra aerodynamic drag experienced within the transonic region (around Mach 0.85–1.2). At these speeds aerospace engineers can gently guide air around the fuselage of the aircraft without producing new shock waves, but any change in cross area farther down the vehicle leads to shock waves along the body. Designers use the Supersonic area rule and the Whitcomb area rule to minimize sudden changes in size.

The sound source has now broken through the sound speed barrier, and is traveling at 1.4 times the speed of sound, c (Mach 1.4). Because the source is moving faster than the sound waves it creates, it actually leads the advancing wavefront. The sound source will pass by a stationary observer before the observer actually hears the sound it creates.

However, in practical applications, a supersonic aircraft must operate stably in both subsonic and supersonic profiles, hence aerodynamic design is more complex.

The main key to having low supersonic drag is to properly shape the overall aircraft to be long and thin, and close to a "perfect" shape, the von Karman ogive or Sears-Haack body. This has led to almost every supersonic cruising aircraft looking very similar to every other, with a very long and slender fuselage and large delta wings, cf. SR-71, Concorde, etc. Although not ideal for passenger aircraft, this shaping is quite adaptable for bomber use.