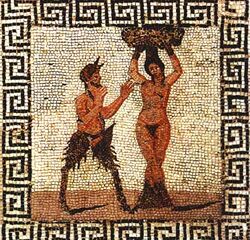 Tile mosaic of Pan and a hamadryad, found in Pompeii

A hamadryad (/hæməˈdraɪ.æd/; Ancient Greek:) is a Greek mythological being that lives in trees. It is a particular type of dryad which, in turn, is a particular type of nymph. Hamadryads are born bonded to a certain tree.[1] Some maintain that a hamadryad is the tree itself, with a normal dryad being simply the indwelling entity, or spirit, of the tree. If the tree should die, the hamadryad associated with it would die as well. For this reason, both dryads and gods would punish mortals who harmed trees.

The mother, Hamadryas, is immortalized in three scientific names, two of which are still valid: the generic name of the cracker butterfly, the specific name of the northernmost monkey in Asia Minor, the hamadryas baboon, and the original (but no longer valid) genus name of the king cobra (originally Hamadryas hannah, now Ophiophagus hannah). The cracker butterfly is more arboreal than most butterflies, as it commonly camouflages itself on trees. It feeds on sap, rotting fruit and dung. The hamadryas baboon is one of the least arboreal monkeys, but was the most common monkey in Hellenic lands. The king cobra is sometimes considered arboreal or semi-arboreal, and is also referred to by the common name "hamadryad", especially in older literature.