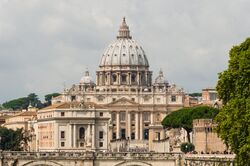 Pope John Paul I died in September 1978, only a month after his election to the papacy. The timing of his death and the Vatican's alleged difficulties with ceremonial and legal death procedures have fostered several conspiracy theories. British author David Yallop wrote extensively about unsolved crimes and conspiracy theories, and in his 1984 book In God's Name suggested that John Paul I died because he was about to uncover financial scandals allegedly involving the Vatican.[1] John Cornwell responded to Yallop's charges in 1987 with A Thief In The Night, in which he analyzed the various allegations and denied the conspiracy.[2] According to Eugene Kennedy, writing for the New York Times , Cornwell's book "helps to purge the air of paranoia and of conspiracy theories, showing how the truth, carefully excavated by an able journalist in a refreshing volume, does make us free."[3]

Various theories have been brought forward in regards to the attempt by Mehmet Ali Ağca to kill Pope John Paul II. Those theories have involved the Grey Wolves,[4] the Bulgarian Secret Service,[5] and others.

The Know Nothings were an anti-Catholic political group in the United States, in the 1840s and 1850s, who claimed that the Irish and other Roman Catholic immigrants to the United States would be controlled by the Pope for anti-American purposes.[6]