A vine is a graphical tool for labeling constraints in high-dimensional probability distributions. A regular vine is a special case for which all constraints are two-dimensional or conditional two-dimensional. Regular vines generalize trees, and are themselves specializations of Cantor trees[1]. Combined with bivariate copulas, regular vines have proven to be a flexible tool in high-dimensional dependence modeling. Copulas [2][3] are multivariate distributions with uniform univariate margins. Representing a joint distribution as univariate margins plus copulas allows the separation of the problems of estimating univariate distributions from the problems of estimating dependence. This is handy in as much as univariate distributions in many cases can be adequately estimated from data, whereas dependence information is rough known, involving summary indicators and judgment.[4][5] Although the number of parametric multivariate copula families with flexible dependence is limited, there are many parametric families of bivariate copulas. Regular vines owe their increasing popularity to the fact that they leverage from bivariate copulas and enable extensions to arbitrary dimensions. Sampling theory and estimation theory for regular vines are well developed [6][7] and model inference has left the post [8][9][7]. Regular vines have proven useful in other problems such as (constrained) sampling of correlation matrices,[10][11] building non-parametric continuous Bayesian networks.[12][13]

In finance, vine copulas have been shown to effectively model tail risk in portfolio optimization applications.[14]

The first regular vine, avant la lettre, was introduced by Harry Joe.[15] The motive was to extend parametric bivariate extreme value copula families to higher dimensions. To this end he introduced what would later be called the D-vine. Joe [16] was interested in a class of n-variate distributions with given one dimensional margins, and n(n − 1) dependence parameters, whereby n − 1 parameters correspond to bivariate margins, and the others correspond to conditional bivariate margins. In the case of multivariate normal distributions, the parameters would be n − 1 correlations and (n − 1)(n − 2)/2 partial correlations, which were noted to be algebraically independent in (−1, 1).

An entirely different motivation underlay the first formal definition of vines in Cooke.[17] Uncertainty analyses of large risk models, such as those undertaken for the European Union and the US Nuclear Regulatory Commission for accidents at nuclear power plants, involve quantifying and propagating uncertainty over hundreds of variables. [18] [19] [20] Dependence information for such studies had been captured with Markov trees, [21] which are trees constructed with nodes as univariate random variables and edges as bivariate copulas. For n variables, there are at most n − 1 edges for which dependence can be specified. New techniques at that time involved obtaining uncertainty distributions on modeling parameters by eliciting experts' uncertainties on other variables which are predicted by the models. These uncertainty distributions are pulled back onto the model's parameters by a process known as probabilistic inversion. [8] [18] The resulting distributions often displayed a dependence structure that could not be captured as a Markov tree.

Graphical models called vines were introduced in [1] [8] [17] An important feature of vines is that they can add conditional dependencies among variables on top of a Markov tree which is generally too parsimonious to summarize the dependence among variables. 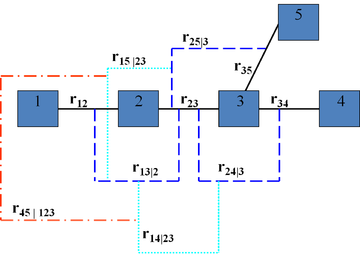 A vine V on n variables is a nested set of connected trees where the edges in the first tree are the nodes of the second tree, the edges of the second tree are the nodes of the third tree, etc. A regular vine or R-vine on n variables is a vine in which two edges in tree j are joined by an edge in tree j + 1 only if these edges share a common node, j = 1, …, n − 2. The nodes in the first tree are univariate random variables. The edges are constraints or conditional constraints explained as follows.

The degree of a node is the number of edges attaching to it. The simplest regular vines have the simplest degree structure; the D-Vine assigns every node degree 1 or 2, the C-Vine assigns one node in each tree the maximal degree. For large vines, it is clearer to draw each tree separately.

The vine pair-copula construction, based on the sequential mixing of conditional distributions has been adapted to discrete variables and mixed discrete/continuous response [30] .[31] Also factor copulas, where latent variables have been added to the vine, have been proposed (e.g., [32]).

Vine researchers have developed algorithms for maximum likelihood estimation and simulation of vine copulas, finding truncated vines that summarize the dependence in the data, enumerating through vines, etc. Chapter 6 of Dependence Modeling with Copulas[33] summarizes these algorithms in pseudocode.

For parametric vine copulas, with a bivariate copula family on each edge of a vine, algorithms and software are available for maximum likelihood estimation of copula parameters, assuming data have been transformed to uniform scores after fitting univariate margins. There are also available algorithms (e.g., [34]) for choosing good truncated regular vines where edges of high-level trees are taken as conditional independence. These algorithms assign variables with strong dependence or strong conditional dependence to low order trees in order that higher order trees have weak conditional dependence or conditional independence. Hence parsimonious truncated vines are obtained for a large number of variables. Software with a user interface in R are available (e.g., [35]).