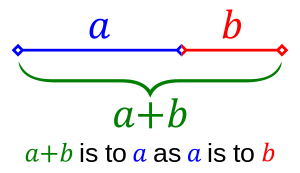 Play (help·info)). In the 833 cents scale this interval is taken as an alternative to the octave as the interval of repetition,[2] however the golden ratio is not regarded as an equivalent interval (notes 833.09 cents apart are not "the same" in the 833 cents scale the way notes 1200 cents apart are in traditional tunings). Other music theorists such as Walter O'Connell, in his 1993 "The Tonality of the Golden Section",[3] and Loren Temes[citation needed] appear to have also created this scale prior to Bohlen's discovery of it.

Lattice with golden ratios on the unison (center), on the perfect fourth (left), and the perfect fifth (right)

Starting with any interval, take the interval produced by the highest original tone and the closest combination tone. Then do the same for that interval. These intervals "converge to a value close to 833 cents. That means nothing else than that for instance for an interval of 144:89 (833.11 cents) both the summation and the difference tone appear...again 833 cents distance from this interval".[1]

Once the interval of 833.09 cents is determined, a stack of them is produced:

Two stacks are also produced on 3:2 and its inverse 4:3 to provide steps 2 and 5, creating a two dimensional lattice. Given that the golden ratio is an irrational number there are three infinite stacks of possible golden ratios which never return exactly back to the unison or octave. Scale step 5 is 597.32 cents and scale step -5 is 602.68 cents (5.37 cents apart).

Bohlen describes a symmetrical seven tone scale, with the pitches of steps 0, 1, 3, 4, & 6 derived from the stack of golden ratio intervals.

Three stacks of 13 golden ratios on the unison, perfect fourth, and perfect fifth

This is comparable to the derivation of the major scale from a stack of perfect fifths (FCGDAEB = CDEFGAB). See: Generated collection.

The repetition of frequencies and the coincidence of higher steps with consonances such as the perfect fifth and octave may be seen (the step number of intervals that coincide with the stack of golden ratios are in bold, while the ratios of repeated intervals are in bold):