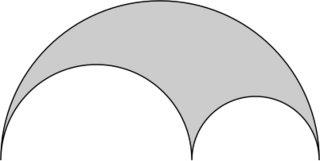 In geometry, an arbelos is a plane region bounded by three semicircles with three apexes such that each corner of each semicircle is shared with one of the others (connected), all on the same side of a straight line (the baseline) that contains their diameters.[1]

The earliest known reference to this figure is in the Book of Lemmas, where some of its mathematical properties are stated as Propositions 4 through 8.[2] The word arbelos is Greek for 'shoemaker's knife'.

Two of the semicircles are necessarily concave, with arbitrary diameters a and b; the third semicircle is convex, with diameter a+b.[1] 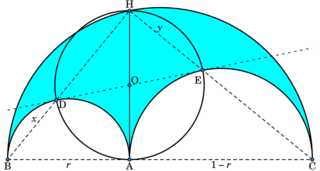 Some special points on the arbelos.

The area of the arbelos is equal to the area of a circle with diameter [math]\displaystyle{ HA }[/math].

The altitude [math]\displaystyle{ AH }[/math] divides the arbelos into two regions, each bounded by a semicircle, a straight line segment, and an arc of the outer semicircle. The circles inscribed in each of these regions, known as the Archimedes' circles of the arbelos, have the same size. 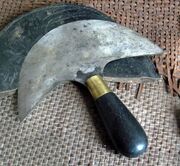 The name arbelos comes from Greek ἡ ἄρβηλος he árbēlos or ἄρβυλος árbylos, meaning "shoemaker's knife", a knife used by cobblers from antiquity to the current day, whose blade is said to resemble the geometric figure. 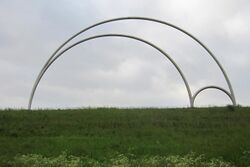