In digital typography, the TrueType font Arial Unicode MS is an extended version of the font Arial. Compared to Arial, it includes higher line height, omits kerning pairs and adds enough glyphs to cover a large subset of Unicode 2.1—thus supporting most Microsoft code pages, but also requiring much more storage space (22 megabytes).[1] It also adds Ideographic layout tables, but unlike Arial, it mandates no smoothing in the 14–18 point range, and contains Roman (upright) glyphs only; there is no oblique (italic) version. Arial Unicode MS was previously distributed with Microsoft Office, but this ended in 2016 version. It is bundled with Mac OS X v10.5 and later. It may also be purchased separately (as Arial Unicode) from Ascender Corporation, who licenses the font from Microsoft.

Arial was designed by Robin Nicholas and Patricia Saunders in 1982 and was released as TrueType font in 1990. From 1993 to 1999, it was extended as Arial Unicode MS (with its first release as a TrueType font in 1998) by the following members of Monotype Typography's Monotype Type Drawing Office, under contract to Microsoft: Brian Allen, Evert Bloemsma, Jelle Bosma, Joshua Hadley, Wallace Ho, Kamal Mansour, Steve Matteson, and Thomas Rickner.

From mid-2001 through mid-2002, Arial Unicode MS was also available as a separate download for licensed users of the standalone version of Microsoft Publisher 2000 SR-1, which did not ship with the font. The freely downloadable version was withdrawn after Microsoft Publisher 2002, which included the font, began shipping. The withdrawal coincided with the withdrawal of the free downloads of Microsoft's "Core fonts for the Web". Numerous companies, organizations, educational establishments and even governments were directing users to the download without referencing the need for a valid Publisher or Office license or any Microsoft operating system.

On 11 April 2005, Ascender Corporation announced it had entered an agreement with Microsoft which enables Ascender to distribute Microsoft fonts, including the Windows Core Fonts, the Microsoft Web Fonts and the many multilingual fonts currently supplied by Microsoft.[2] Called Arial Unicode, it is sold for approximately United States dollar 99 per 5 users.

The font is also apparently licensed to Apple, who announced on October 16, 2007 that their flagship operating system, Mac OS X v10.5 ("Leopard"), would be bundled with Arial Unicode.[3] Leopard also ships with several other previously Microsoft-only fonts, including Microsoft Sans Serif, Tahoma and Wingdings.[4]

Monotype Imaging currently also licenses Arial Unicode on its own. It was also bundled by Monotype as part of iPhone Compatibility Font Set.[5]

Arial Unicode MS is no longer available in Microsoft Office 2016, as it has been judged to no longer be suitable as a fallback font.[6] 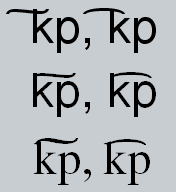 All versions of Arial Unicode MS deal with double-width diacritic characters incorrectly, drawing them too far to the left by one character width. According to the Unicode Standard 4.0.0, section 7.7 combining double diacritics go between the two characters to be marked. However, to make text look correct in Arial Unicode MS, the double-width diacritic must be placed after both characters to be marked. This means that it is not possible to make text that renders these characters correctly in both Arial Unicode MS and in other (correctly designed) Unicode fonts. This bug affects the rendering of text written in the International Phonetic Alphabet and in ALA-LC Romanization for non-Latin-script languages. If the displayed font in your browser draws the diacritics correctly, they should appear over the characters: k͠p, k͡p.

The minuscule letters that form the ligatures fi, fl, ffi, ffl, long st, and st are not connected, except for the two f's in the ffi and ffl ligatures. As there is no semantic difference, nothing mandates that these must be connected, and they are indistinguishable from the individual letters placed next to each other.

Arial Unicode MS was unable to render some Arabic characters, particularly those used in Sindhi, in their connected forms, showing only their isolated forms instead.