Short description: Partition of space by a hyperplanes 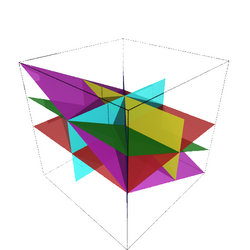 A hyperplane arrangement in space

The intersection semilattice and the matroid

When L(A) is a lattice, the matroid of A, written M(A), has A for its ground set and has rank function r(S) := codim(I), where S is any subset of A and I is the intersection of the hyperplanes in S. In general, when L(A) is a semilattice, there is an analogous matroid-like structure called a semimatroid, which is a generalization of a matroid (and has the same relationship to the intersection semilattice as does the matroid to the lattice in the lattice case), but is not a matroid if L(A) is not a lattice.

For a subset B of A, let us define f(B) := the intersection of the hyperplanes in B; this is S if B is empty. The characteristic polynomial of A, written pA(y), can be defined by

summed over all subsets B of A except, in the affine case, subsets whose intersection is empty. (The dimension of the empty set is defined to be −1.) This polynomial helps to solve some basic questions; see below. Another polynomial associated with A is the Whitney-number polynomial wA(x, y), defined by

summed over B ⊆ C ⊆ A such that f(B) is nonempty.

Being a geometric lattice or semilattice, L(A) has a characteristic polynomial, pL(A)(y), which has an extensive theory (see matroid). Thus it is good to know that pA(y) = yi pL(A)(y), where i is the smallest dimension of any flat, except that in the projective case it equals yi + 1pL(A)(y). The Whitney-number polynomial of A is similarly related to that of L(A). (The empty set is excluded from the semilattice in the affine case specifically so that these relationships will be valid.)

The intersection semilattice determines another combinatorial invariant of the arrangement, the Orlik–Solomon algebra. To define it, fix a commutative subring K of the base field and form the exterior algebra E of the vector space

In real affine space, the complement is disconnected: it is made up of separate pieces called cells or regions or chambers, each of which is either a bounded region that is a convex polytope, or an unbounded region that is a convex polyhedral region which goes off to infinity. Each flat of A is also divided into pieces by the hyperplanes that do not contain the flat; these pieces are called the faces of A. The regions are faces because the whole space is a flat. The faces of codimension 1 may be called the facets of A. The face semilattice of an arrangement is the set of all faces, ordered by inclusion. Adding an extra top element to the face semilattice gives the face lattice.

Typical problems about an arrangement in n-dimensional real space are to say how many regions there are, or how many faces of dimension 4, or how many bounded regions. These questions can be answered just from the intersection semilattice. For instance, two basic theorems, from Zaslavsky (1975), are that the number of regions of an affine arrangement equals (−1)npA(−1) and the number of bounded regions equals (−1)npA(1). Similarly, the number of k-dimensional faces or bounded faces can be read off as the coefficient of xn−k in (−1)n wA (−x, −1) or (−1)nwA(−x, 1).

(Meiser 1993) designed a fast algorithm to determine the face of an arrangement of hyperplanes containing an input point.

Another question about an arrangement in real space is to decide how many regions are simplices (the n-dimensional generalization of triangles and tetrahedra). This cannot be answered based solely on the intersection semilattice. The McMullen problem asks for the smallest arrangement of a given dimension in general position in real projective space for which there does not exist a cell touched by all hyperplanes.

A real linear arrangement has, besides its face semilattice, a poset of regions, a different one for each region. This poset is formed by choosing an arbitrary base region, B0, and associating with each region R the set S(R) consisting of the hyperplanes that separate R from B. The regions are partially ordered so that R1 ≥ R2 if S(R1, R) contains S(R2, R). In the special case when the hyperplanes arise from a root system, the resulting poset is the corresponding Weyl group with the weak order. In general, the poset of regions is ranked by the number of separating hyperplanes and its Möbius function has been computed (Edelman 1984).

In complex affine space (which is hard to visualize because even the complex affine plane has four real dimensions), the complement is connected (all one piece) with holes where the hyperplanes were removed.

A typical problem about an arrangement in complex space is to describe the holes.

The basic theorem about complex arrangements is that the cohomology of the complement M(A) is completely determined by the intersection semilattice. To be precise, the cohomology ring of M(A) (with integer coefficients) is isomorphic to the Orlik–Solomon algebra on Z.

The isomorphism can be described explicitly and gives a presentation of the cohomology in terms of generators and relations, where generators are represented (in the de Rham cohomology) as logarithmic differential forms

with [math]\displaystyle{ \alpha }[/math] any linear form defining the generic hyperplane of the arrangement.

Sometimes one wants to allow repeated hyperplanes in the arrangement. We did not consider this possibility in the preceding discussion, but it makes no material difference.