Ionospheric storms are storms which contain varying densities[1] of energised electrons produced from the sun. They are categorised into positive and negative storms, where positive storms have a high density of electrons and negative storms contain a lower density.[2] This is measured in total electron content (TEC), and is a key variable used in data to record and compare the intensities of ionospheric storms. Ionospheric storms are caused by geomagnetic storms.[3] Its occurrences are strongly linked with sudden increases of solar wind speed, where solar wind brings energised electrons into the upper atmosphere of the Earth and contributes to increased TEC.[4] Larger storms form global visibility of auroras. Auroras are most commonly seen in the arctic circle, however large ionospheric storms allow for them to be visible in places such as the United States , United Kingdom and Europe. The most intense ionospheric storm occurred in 1859, commonly named “solar storm of 1859” or the “Carrington Event.” The Carrington Event was named after Richard Carrington, an English astronomer who observed the irregular sun activity[5] that occurred during the Carrington Event. The intensity of the storm brought the visibility of the aurora even closer to the equator, reported to be seen in places near it such as Florida and the Caribbean. Ionospheric storms can happen at any time and location.[6] 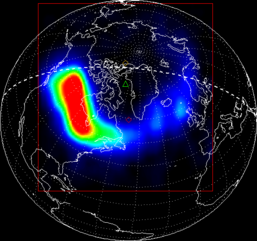 X-Ray image of Aurora Borealis taken during an ionospheric storm by NASA.

F-region and D-region ionospheric storms are also considered main categories of ionospheric storms. The F-region storms occur due to sudden increases of energised electrons instilled into Earth's ionosphere. It is the highest region of the ionosphere, along with the F1 layer and F2 layer, its distance above the earth's surface being approximately 200–500 km above the Earth's surface.[7] The duration of these storms are around a day and reoccur every approximately 27.3 days.[6] Most ionospheric abnormalities occur in the F2 and E layers of the ionosphere. D-region storms occur immediately after F-region storms, and are referred to as the “Post-Storm Effect," the duration of it spanning for a week after the F-region storm's occurrence.[8]

The largest ionospheric storm occurred during the Carrington event on August 28, 1859 and caused extensive damages to various parts including the sparking of fires in railway signals and telegraph wires.[9] The substantial density of energised electrons produced by the storm caused these electrical overloads and shortages.

In recent accounts, the St Patrick's day storm in March 2013 and 2015 caused a strong negative phase in the F2 ionospheric region. The March 2013 and 2015 storms were also long lasting, spanning for over 6 hours.[11] The June 2015 Southern Hemisphere winter storm had a shorter duration, lasting between 4 and 6 hours, and producing a positive effect in the ionosphere. It is difficult to determine the exact location and time for the occurrences of ionospheric storms, its effects being dependent on season, their varying starting points, compositional changes in the ionosphere and the travelling ionospheric disturbances (TIDs) in relation to gravity waves having varying impacts on different locations.[11]

In the commencement of an ionospheric storm, due to geomagnetic disturbances in the ionosphere, the storm will become positive for a brief duration. Then, it will become a negative phase storm, and revert to a recovery phase where electron density neutralises.[12]

The recovery phase of the ionospheric storm occurs after the negative phase ends, and neutralises the electron density. A time scale of 12 hours to 1 day can be used in accordance with the Thermosphere Ionosphere General Circulation Model (TIGCM) as a means of calculating the precise time of electron density restabilising post-storm.[14]

The effects of ionospheric storms on different layers in the ionosphere including in the F-region, E-region and D-region vary depending on the magnitude of the storm. F-Region is the most affected layer due to it ranging the highest altitude compared to the E-region and D-region. The D-region is the region with the lowest altitude and will receive the least geomagnetic disturbance.

The F-region is the highest layer of the ionosphere and inner atmosphere, around 200 km above Earth's surface and spanning around 300 km in total layer altitude.The F2-region of the F-region (highest altitude inner atmospheric layer) will be affected through the decrease of critical frequency and maximum usable frequency, which is necessary for high frequency radio communication.[12] The F-region is affected by the friction of solar wind on the ionospheric boundaries which causes magnetospheric motion that may infiltrate into the ionosphere or exit it, creating disturbances which increase and decrease TEC and electron density.[15] During ionospheric storms, it is more common for "anomalous" increases and decreases of TEC and electron density to occur in the F2-layer.[16] Ionisation density is also affected in the F-region, decreasing as the height increases,[17] and as ionisation density increases, atoms lose electrons and therefore lower altitudes lose electron density.[18] The lower layers of the F-region such as the F1-layer have higher amounts of ionisation and less electron density.

The E-region is the middle layer of the ionosphere, approximately 100 km above the Earth's surface, spanning around 100 km up. Effects on the E-region are mainly associated with the high latitudes of the layer, where more severe geomagnetic disturbances occur. Ionisation in this layer is predominantly derived from the particle precipitation in auroras.[19] Due to its lower latitude, there is greater ionisation density compared to that of the F-region, and less electron density. Increased conductivity of currents is caused by the convection electric fields of the magnetosphere that run down the lines of the magnetic field in the E-region.[19] The increased conductivity is also from the effects of the ionospheric storm. There is also a maximisation in the E-region of the transfer of energy from plasma to neutral particles which promotes "frictional heating" and is used as a heat source for the thermosphere.[19]

The D-region is the lowest layer of the ionosphere, approximately 60 km above the Earth's surface and its layer's altitude spanning around 30–40 km. The top of the D-region is around 90–100 km above the Earth's surface. When ionospheric storms occur, there is enhanced ionisation of electrons that happens in the D-region and causes a decline in day-night asymmetry (DLPT depth.)[20] DLPT depth is calculated by subtracting average day rate by average night rate and dividing it by the average of the rates.[21] The DLPT depth decreases as Ap increases in the D-layer.

There are strong disturbances to radio communications in the event of an ionospheric storm, where in middle and high altitudes,[22] radio communications are considered “ineffective.”[22] This is due to radio waves being found in the ionosphere where the sudden increase of solar wind and energised electrons will interfere. The impacts of disturbances related to radio communications can include temporary blackouts[disambiguation needed] of signal to radio-wave based technology such as televisions, radios and cordless phones.[23] Global impacts vary, including the detriment of digital broadcasting and the displaying of information through radio-communication technologies which may temporarily eliminate the use of certain technologies.

Aircraft passengers and the crew are more prone to dangerous exposure from radiation during an ionospheric storm. Flight altitudes are usually 10 km or more, so when an ionospheric storm occurs during the flight, people on the plane will potentially gain an approximate 0.1% chance of developing a lethal cancer during their lifetime. The plane when flying at a 10 km or above altitude will have around 300 times more exposure to ionised radiation than on sea level.[24] The energised particles produced by the ionospheric storm will also potentially cause damage and disrupt "microelectronic circuitry" due to single event effect (SEE), when the energised particles interconnect with the semiconductor device and causes system failure.[24] Aircrew and the pilot in this situation during short circuiting of aircraft electrical equipment will be reprioritised of their work and cause detriment to the overall safety and wellbeing of the passengers.

Ionospheric storms have a visible effect on satellites and satellite communication. The sudden increase of solar wind speed and “extreme space weather”[25] as produced by the sun increases the radiation emitted. Solar cells on satellites will have a chance of being affected or destroyed and this will lead to disturbances in satellite communications and signals commonly used for various technologies. This disturbance can hinder the sending of signals such as in the form of broadcasting and data communications.

Earthward solar winds[26] and excessive radiation produced from it has limited effect on the climate. The radiation emitted by solar wind only reaches the highest layers of the Earth's atmosphere, including the ionosphere. In the lower atmospheres, where climate change is able to be recorded and monitored, there are minimal trends supporting an ionospheric storm's impact. It is recorded that the increase of solar wind during March 2012 in the United States “coincided”[27] with the heat waves that occurred at the time. The impact on climate in accordance with ionospheric storms based on modern technology is shown to have little to no impact.

Due to the disturbances of signals in the ionosphere caused by ionospheric storms, GPS systems are drastically affected. In the late 20th and 21st centuries GPS signals are incorporated within various phones, so the commonality of its use has majorly increased since its release. It is a significant piece of technology that is almost entirely affected as it serves the purpose of displaying direction, which can disable people from being able to tell directions. Directional equipment in aircraft like Global Navigation Satellite Services (GNSS) is also used, however is compromised by radiation damage on satellites and solar cells which all for this navigation system to work. When aircraft loses access to GNSS in the event of an ionospheric storm, back up aircraft procedures are available.[24]

During the Carrington Event in 1859 where there were only a limited number of available measuring technologies, the full extent of the impacts could not be precisely recorded apart from recounts in newspaper articles written in 1859. In the late 20th and early 21st century, forecasting technology has been improved. This technology allows meteorologists to detect the highest frequency that can be vertically returned [28] 24 hours in advance with accuracy of 8-13% periods with limited disturbance. PropMan, created by K. Davies in the early 1970s is a program which contains the ionospheric prediction code (IONSTORM), for the purpose of forecasting maximum usable frequencies (MUFs) during ionospheric storms when F-region communication frequencies are negated.[29]