Short description: Region around an astronomical object in which its magnetic field affects charged particles

In astronomy and planetary science, a magnetosphere is a region of space surrounding an astronomical object in which charged particles are affected by that object's magnetic field.[1][2] It is created by a celestial body with an active interior dynamo.

In the space environment close to a planetary body, the magnetic field resembles a magnetic dipole. Farther out, field lines can be significantly distorted by the flow of electrically conducting plasma, as emitted from the Sun (i.e., the solar wind) or a nearby star.[3][4] Planets having active magnetospheres, like the Earth, are capable of mitigating or blocking the effects of solar radiation or cosmic radiation, that also protects all living organisms from potentially detrimental and dangerous consequences. This is studied under the specialized scientific subjects of plasma physics, space physics and aeronomy.

Beginning in the late 1940s, rockets were used to study cosmic rays. In 1958, Explorer 1, the first of the Explorer series of space missions, was launched to study the intensity of cosmic rays above the atmosphere and measure the fluctuations in this activity. This mission observed the existence of the Van Allen radiation belt (located in the inner region of Earth's magnetosphere), with the follow up Explorer 3 later that year definitively proving its existence. Also during 1958, Eugene Parker proposed the idea of the solar wind, with the term 'magnetosphere' being proposed by Thomas Gold in 1959 to explain how the solar wind interacted with the Earth's magnetic field. The later mission of Explorer 12 in 1961 led by the Cahill and Amazeen observation in 1963 of a sudden decrease in magnetic field strength near the noon-time meridian, later was named the magnetopause. By 1983, the International Cometary Explorer observed the magnetotail, or the distant magnetic field.[4]

Magnetospheres are dependent on several variables: the type of astronomical object, the nature of sources of plasma and momentum, the period of the object's spin, the nature of the axis about which the object spins, the axis of the magnetic dipole, and the magnitude and direction of the flow of solar wind. 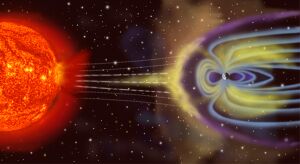 Many astronomical objects generate and maintain magnetospheres. In the Solar System this includes the Sun, Mercury, Jupiter, Saturn, Uranus, Neptune,[15] and Ganymede. The magnetosphere of Jupiter is the largest planetary magnetosphere in the Solar System, extending up to 7,000,000 kilometers (4,300,000 mi) on the dayside and almost to the orbit of Saturn on the nightside.[16] Jupiter's magnetosphere is stronger than Earth's by an order of magnitude, and its magnetic moment is approximately 18,000 times larger.[17] Venus, Mars, and Pluto, on the other hand, have no magnetic field. This may have had significant effects on their geological history. It is theorized that Venus and Mars may have lost their primordial water to photodissociation and the solar wind. A strong magnetosphere greatly slows this process.[15][18] The magnetosphere of an exoplanet[19] was detected in 2021.