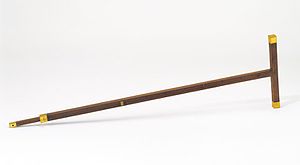 Measuring the height of a star with a Jacob's staff

The term Jacob's staff, also known as cross-staff, a ballastella, a fore-staff, or a balestilha, is used to refer to several things. In its most basic form, a Jacob's staff is a stick or pole with length markings; most staffs are much more complicated than that, and usually contain a number of measurement and stabilization features. The two most frequent uses are:

The simplest use of a Jacob's staff is to make qualitative judgements of the height and angle of an object relative to the user of the staff.

In astronomy and navigation

The Jacob's staff, when used for astronomical observations, was also referred to as a radius astronomicus. With the demise of the cross-staff, in the modern era the name "Jacob's staff" is applied primarily to the device used to provide support for surveyor's instruments.

The origin of the name of the instrument is not certain. Some refer to the Biblical patriarch Jacob,[1] specifically Gen 32:11.[1] It may also take its name after its resemblance to Orion, referred to by the name of Jacob on some medieval star charts.[2][3] Another possible source is the Pilgrim's staff, the symbol of St James (Jacobus in Latin). The name cross staff simply comes from its cruciform shape.

The original Jacob's staff was developed as a single pole device in the 14th century that was used in making astronomical measurements. It was first described by the French-Jewish mathematician Levi ben Gerson[4][5] of Provence, in his "Book of the Wars of the Lord" translated in Latin as well as Hebrew.[6] He used a Hebrew name for the staff that translates to “Revealer of Profundities.” The term “Jacob’s staff” was not used by Ben Gerson himself but by his Christian contemporaries.[7] However, its invention was likely due to fellow French-Jewish astronomer Jacob ben Makir who also lived in Provence in the same period.[8] Attributions to 15th century Austrian astronomer Georg Purbach[9] are less likely correct, since Purbach was not born until 1423. Such attributions may refer to a different instrument with the same name. May[10] states that its origins can be traced to the Chaldeans around 400 BC.

Although it has become quite accepted that ben Gerson first described Jacob's staff, the British Sinologist Joseph Needham theorizes that the Song Dynasty Chinese scientist Shen Kuo (1031–1095), in his Dream Pool Essays of 1088, described a Jacob's staff.[11] Shen was an antiquarian interested in ancient objects; after he unearthed an ancient crossbow-like device from a home's garden in Jiangsu, he realized it had a sight with a graduated scale that could be used to measure the heights of distant mountains, likening it to how mathematicians measure heights by using right-angle triangles.[11] He wrote that when one viewed the whole breadth of a mountain with it, the distance on the instrument was long; when viewing a small part of the mountainside, the distance was short; this, he wrote, was due to the cross piece that had to be pushed further away from the eye, while the graduation started from the further end. Needham does not mention any practical application of this observation.[11] 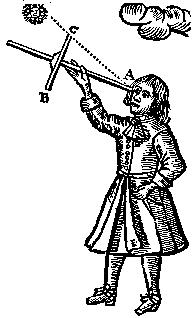 In the original form of the cross-staff, the pole or main staff was marked with graduations for length. The cross-piece (BC in the drawing to the right), also called the transom or transversal, slides up and down on the main staff. On older instruments, the ends of the transom were cut straight across. Newer instruments had brass fittings on the ends with holes in the brass for observation. In marine archaeology, these fittings are often the only components of a cross-staff that survive.[13]

It was common to provide several transoms, each with a different range of angles it would measure. Three transoms were common. In later instruments, separate transoms were switched in favour of a single transom with pegs to indicate the ends. These pegs mounted in one of several pairs of holes symmetrically located on either side of the transom. This provided the same capability with fewer parts.[10] The transom on Frisius' version had a sliding vane on the transom as an end point.[10] 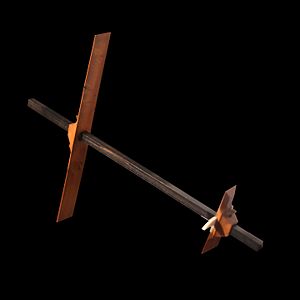 The original version was not reported to be used at sea, until the Age of Discoveries. Its use was reported by João de Lisboa in his Treatise on the Nautical Needle of 1514.[14] Johannes Werner suggested the cross-staff be used at sea in 1514[10] and improved instruments were introduced for use in navigation. John Dee introduced it to England in the 1550s.[1] In the improved versions, the rod was graduated directly in degrees. This variant of the instrument is not correctly termed a Jacob's staff but is a cross-staff.[8]

The cross-staff was difficult to use. In order to get consistent results, the observer had to position the end of the pole precisely against his cheek. He had to observe the horizon and a star in two different directions while not moving the instrument when he shifted his gaze from one to the other. In addition, observations of the sun required the navigator to look directly at the sun. This could be a painful exercise and made it difficult to obtain an accurate altitude for the sun. Mariners took to mounting smoked-glass to the ends of the transoms to reduce the glare of the sun.[10][15]

Another variant of the cross-staff was a spiegelboog, invented in 1660 by the Dutchman, Joost van Breen.

In surveying the Jacob's staff, contemporaneously referred to as a jacob staff, is a single straight rod or staff made of nonferrous material, pointed and metal-clad at the bottom for penetrating the ground.[19] It also has a screw base and occasionally a ball joint on the mount, and is used for supporting a compass, transit, or other instrument.[20]

The term cross-staff may also have a different meaning in the history of surveying. While the astronomical cross-staff was used in surveying for measuring angles, two other devices referred to as a cross-staff were also employed.[21]

In the past, many surveyor's instruments were used on a Jacob's staff. These include:

Some devices, such as the modern optical targets for laser-based surveying, are still in common use on a Jacob's staff.

In geology, the Jacob's staff is mainly used to measure stratigraphic thicknesses in the field, especially when bedding is not visible or unclear (e.g., covered outcrop) and when due to the configuration of an outcrop, the apparent and real thicknesses of beds diverge therefore making the use of a tape measure difficult. There is a certain level of error to be expected when using this tool, due to the lack of an exact reference mean for measuring stratigraphic thickness. High-precision designs include a laser able to slide vertically along the staff and to rotate on a plane parallel to bedding.[23]