Short description: System of weights based on a pound of 16 ounces 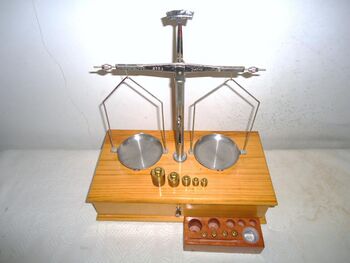 Finely crafted pan balance or scales with boxed set of standardized gram weights sequenced in units of mass. Such scales are used to make the most accurate of fine measurements, such as in the needs of empirical chemistry. 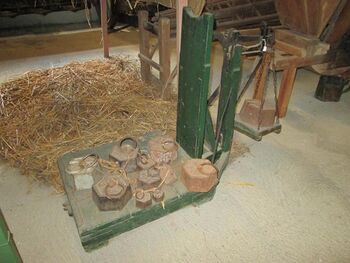 Robust weights like these hexagonal decimal-scaled antiques were used for trade into the late 20th century.

In 1959, by international agreement, the definitions of the pound and ounce became standardized in countries which use the pound as a unit of mass.[3] The International Avoirdupois Pound was then created. It is the everyday system of weights used in the United States. It is still used, in varying degrees, in everyday life in the United Kingdom, Canada, New Zealand, Australia, and some other former British colonies, despite their official adoption of the metric system.

The avoirdupois weight system's general attributes were originally developed for the international wool trade in the Late Middle Ages, when trade was in recovery. It was historically based on a physical standardized pound or "prototype weight" that could be divided into 16 ounces.[lower-alpha 1] There were a number of competing measures of mass, and the fact that the avoirdupois pound had three even numbers as divisors (half and half and half again) may have been a cause of much of its popularity, so that the system won out over systems with 12 or 10 or 15 subdivisions.[3] The use of this unofficial system gradually stabilized[lower-alpha 2] and evolved, with only slight changes in the reference standard or in the prototype's actual mass.

Over time, the desire not to use too many different systems of measurement allowed the establishment of "value relationships", with other commodities metered and sold by weight measurements such as bulk goods (grains, ores, flax) and smelted metals; so the avoirdupois system gradually became an accepted standard through much of Europe.[3]

In England, Henry VII authorized its use as a standard, and Queen Elizabeth I acted three times to enforce a common standard, thus establishing what became the Imperial system of weights and measures.[3] Late in the 19th century various governments acted to redefine their base standards on a scientific basis and establish ratios between local avoirdupois measurements and international SI metric system standards.[3] The legal actions of these various governments were independently conceived, and so did not always pick the same ratios to metric units for each avoirdupois unit. The result of this was, after these standardisations, measurements of the same name often had marginally different recognised values in different regions (although the pound generally remained very similar). In the modern day, this is evident in the small difference between United States customary and British Imperial pounds.[3]

An alternative system of mass, the troy system, is generally used for precious materials. The modern definition of the avoirdupois pound (1 lb) is exactly 0.45359237 kilograms.[3][4]

The word avoirdupois is from Anglo-Norman French aveir de peis (later avoir du pois), literally "goods of weight" (Old French aveir, as verb meaning "to have" and as noun meaning "property, goods", comes from the Latin habere, "to have, to hold, to possess something"; de = "from"/"of", cf. Latin; peis = "weight", from Latin pensum).[5][6] This term originally referred to a class of merchandise: aveir de peis, "goods of weight", things that were sold in bulk and were weighed on large steelyards or balances.

Only later did the term become identified with a particular system of units used to weigh such merchandise. Inconsistent orthography throughout history has left many variants of the term, such as haberty-poie and haber de peyse. (The Norman peis became the Parisian pois. In the 17th century de was replaced with du.)[7]

The avoirdupois word is made of three French words (avoir du pois). When the word avoir might both be a verb and a noun, it was used as a noun — meaning a good — in the 16th century to differentiate a good sold by items (avoir de prix) from a good sold by its weight (avoir de pois/poids).[8][9]

The current orthography of the last word is poids in the current standard French orthography,[9] but the word avoirdupois remained as is in the anglosphere. 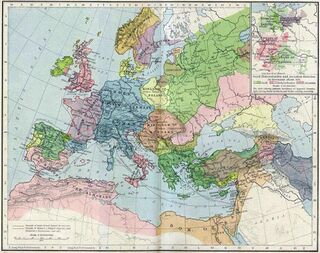 The units first became used by wool traders in the Kingdom of England and the Low Countries during the end of the High Middle Ages, as population growth and the Renaissance gave rise to an increasingly numerous town population and a newly established middle class.

The rise in use of the measurement system corresponds to the regrowth of trade during the High Middle Ages after the early crusades, when Europe experienced a growth in towns, turned from the chaos of warlordism to long-distance trade, and began annual fairs, tournaments and commerce, by land and sea. There are two major hypotheses regarding the origins of the avoirdupois system. The older hypothesis is that it originated in France.[10] A newer hypothesis is that it is based on the weight system of Florence.[3][11]

The earliest known version of the avoirdupois weight system had the following units: a pound of 6992 grains, a stone of 14 pounds, a woolsack of 26 stone, an ounce of ​1⁄16 pound, and finally, the ounce was divided into 16 "parts".[12]

The earliest known occurrence of the word "avoirdupois" (or some variant thereof) in England is from a document entitled Tractatus de Ponderibus et Mensuris ("Treatise on Weights and Measures"). This document is listed in early statute books under the heading 31 Edward I dated 2 February 1303. More recent statute books list it among statutes of uncertain date. Scholars nowadays believe that it was probably written between 1266 and 1303.[13] Initially a royal memorandum, it eventually took on the force of law and was recognized as a statute by King Henry VIII and Queen Elizabeth I.

It was repealed by the Weights and Measures Act 1824. In the Tractatus, the word "avoirdupois" refers not to a weight system, but to a class of goods, specifically heavy goods sold by weight, as opposed to goods sold by volume, count, or some other method. Since it is written in Anglo-Norman French, this document is not the first occurrence of the word in the English language.[14][15]

Toward a uniformity of measures

[Original:] & acorde qe deſore en auant vn meſure & vn pois ſoit parmy toute Engleterre & qe le Treſorer face faire certaines eſtandardz de buſſel de galon de poys darreiſne & les face mander en cheſcune countee par la ou tielx eſtandardz ne ſont pas auant ces hures mandez [English translation:] (4) it is assented and accorded, That from henceforth one Measure and one Weight shall be throughout England; (5) and that the Treasurer cause to be made certain Standards of Bushels, Gallons, of Weights of Auncel, and send the same into every County where such Standards be not sent before this Time;

The third development is a set of 14th-century bronze weights at the Westgate Museum in Winchester, England. The weights are in denominations of 7 pounds (corresponding to a unit known as the clip or wool-clip), 14 pounds (stone), 56 pounds (4 stone) and 91 pounds (​1⁄4 sack or woolsack).[18][19] The 91-pound weight is thought to have been commissioned by Edward III in conjunction with the statute of 1350, while the other weights are thought to have been commissioned in conjunction with the statutes of 1340. The 56-pound weight was used as a reference standard as late as 1588.[12][20]

These are the units in their original Anglo-Norman French forms:[17]

In the United Kingdom, 14 avoirdupois pounds equal one stone. The quarter, hundredweight, and ton equal respectively, 28 lb, 112 lb, and 2,240 lb in order for masses to be easily converted between them and stone. The following are the units in the British or imperial version of the avoirdupois system:

Note: The plural form of the unit stone is either stone or stones, but stone is most frequently used.

The 13 British colonies in North America used the avoirdupois system, but continued to use the British system as it was, without the evolution that was occurring in Britain in the use of the stone unit. In 1824 there was landmark new weights and measures legislation in the United Kingdom that the United States did not adopt.

In the United States, quarters, hundredweights, and tons remain defined as 25, 100, and 2000 lb respectively. The quarter is now virtually unused, as is the hundredweight outside of agriculture and commodities. If disambiguation is required, then they are referred to as the smaller "short" units in the United States, as opposed to the larger British "long" units. Grains are used worldwide for measuring gunpowder and smokeless powder charges. Historically, the dram (​27 11⁄32 grains; not to be mixed up with the apothecaries' dram of 60 grains) has also been used worldwide for measuring gunpowder charges, particularly for shotguns and large black-powder rifles.