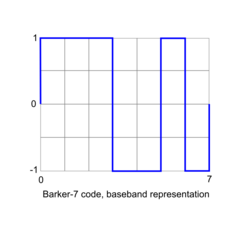 Graphical representation of a Barker-7 code 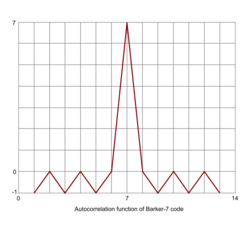 Autocorrelation function of a Barker-7 code 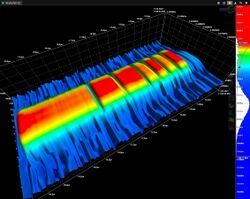 In telecommunication technology, a Barker code, or Barker sequence, is a finite sequence of digital values with the ideal autocorrelation property. It is used as a synchronising pattern between sender and receiver.

Binary digits have very little meaning unless the significance of the individual digits is known. The transmission of a pre-arranged synchronising pattern of digits can enable a signal to be regenerated by a receiver with a low probability of error. In simple terms it is equivalent to tying a label to one digit after which others may be related by counting. This is achieved by transmitting a special pattern of digits which is unambiguously recognised by the receiver. The longer the pattern the more accurately the data can be synchronised and errors due to distortion omitted. These patterns, called Barker Sequences are better known as Barker code after the inventor Ronald Hugh Barker. The process is “Group Synchronisation of Binary Digital Systems” first published in 1953.[1] Initially developed for radar, telemetry and digital speech encryption in 1940 / 50’s

A Barker code or Barker sequence is a finite sequence of N values of +1 and −1,

are as small as possible:

Only nine Barker sequences[2] are known, all of length N at most 13.[3] Barker's 1953 paper asked for sequences with the stronger condition

Only four such sequences are known, shown in bold in the table below.[4]

Here is a table of all known Barker codes, where negations and reversals of the codes have been omitted. A Barker code has a maximum autocorrelation sequence which has sidelobes no larger than 1. It is generally accepted that no other perfect binary phase codes exist.[5][6] (It has been proven that there are no further odd-length codes,[7] nor even-length codes of N < 1022.[8])

The positive and negative amplitudes of the pulses forming the Barker codes imply the use of biphase modulation or binary phase-shift keying; that is, the change of phase in the carrier wave is 180 degrees.

For the case of cyclic autocorrelation, other sequences have the same property of having perfect (and uniform) sidelobes, such as prime-length Legendre sequences, Zadoff–Chu sequences (used in 3rd and 4th generation cellular radio) and [math]\displaystyle{ 2^n-1 }[/math] maximum length sequences (MLS). Arbitrarily long cyclic sequences can be constructed. 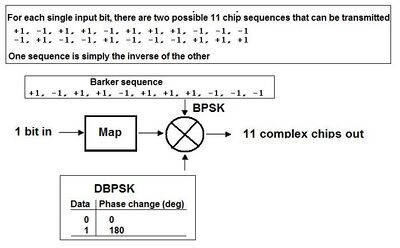 In wireless communications, sequences are usually chosen for their spectral properties and for low cross correlation with other sequences likely to interfere. In the 802.11 standard, an 11-chip Barker sequence is used for the 1 and 2 Mbit/sec rates. The value of the autocorrelation function for the Barker sequence is 0 or −1 at all offsets except zero, where it is +11. This makes for a more uniform spectrum, and better performance in the receivers.[12]