In mathematics, Bhaskara I's sine approximation formula is a rational expression in one variable for the computation of the approximate values of the trigonometric sines discovered by Bhaskara I (c. 600 – c. 680), a seventh-century Indian mathematician.[1] This formula is given in his treatise titled Mahabhaskariya. It is not known how Bhaskara I arrived at his approximation formula. However, several historians of mathematics have put forward different hypotheses as to the method Bhaskara might have used to arrive at his formula. The formula is elegant, simple and enables one to compute reasonably accurate values of trigonometric sines without using any geometry whatsoever.[2]

The formula is given in verses 17 – 19, Chapter VII, Mahabhaskariya of Bhaskara I. A translation of the verses is given below:[3]

(The reference "Rsine-differences 225" is an allusion to Aryabhata's sine table.)

In modern mathematical notations, for an angle x in degrees, this formula gives[3]

Equivalent forms of the formula

Bhaskara I's sine approximation formula can be expressed using the radian measure of angles as follows.[1]

For a positive integer n this takes the following form:[4]

Equivalent forms of Bhaskara I's formula have been given by almost all subsequent astronomers and mathematicians of India. For example, Brahmagupta's (598 – 668 CE) Brhma-Sphuta-Siddhanta (verses 23 – 24, Chapter XIV)[3] gives the formula in the following form:

Accuracy of the formula 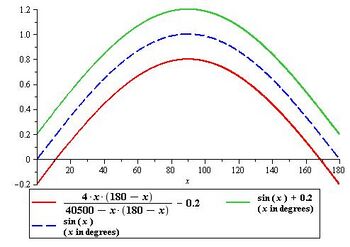 The formula is applicable for values of x° in the range from 0 to 180. The formula is remarkably accurate in this range. The graphs of sin ( x ) and the approximation formula are visually indistinguishable and are nearly identical. One of the accompanying figures gives the graph of the error function, namely the function,

in using the formula. It shows that the maximum absolute error in using the formula is around 0.0016. From a plot of the percentage value of the absolute error, it is clear that the maximum percentage error is less than 1.8. The approximation formula thus gives sufficiently accurate values of sines for most practical purposes. However it was not sufficient for the more accurate computational requirements of astronomy. The search for more accurate formulas by Indian astronomers eventually led to the discovery the power series expansions of sin x and cos x by Madhava of Sangamagrama (c. 1350 – c. 1425), the founder of the Kerala school of astronomy and mathematics. 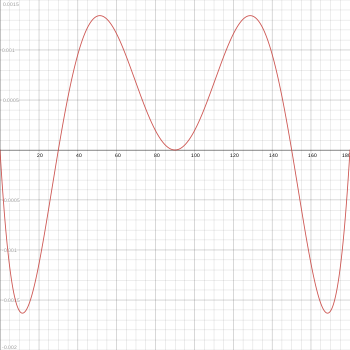 Graph of the error in Bhaskara I's sine approximation formula 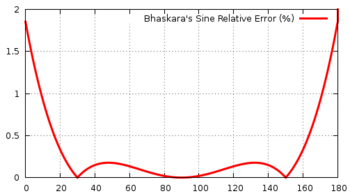 Derivation of the formula

Bhaskara had not indicated any method by which he arrived at his formula. Historians have speculated on various possibilities. No definitive answers have as yet been obtained. Beyond its historical importance of being a prime example of the mathematical achievements of ancient Indian astronomers, the formula is of significance from a modern perspective also. Mathematicians have attempted to derive the rule using modern concepts and tools. Around half a dozen methods have been suggested, each based on a separate set of premises.[2][3] Most of these derivations use only elementary concepts.

Derivation based on elementary geometry

Let the circumference of a circle be measured in degrees and let the radius R of the circle be also measured in degrees. Choosing a fixed diameter AB and an arbitrary point P on the circle and dropping the perpendicular PM to AB, we can compute the area of the triangle APB in two ways. Equating the two expressions for the area one gets (1/2) AB × PM = (1/2) AP × BP. This gives

One now seeks two constants α and β such that

It is indeed not possible to obtain such constants. However one may choose values for α and β so that the above expression is valid for two chosen values of the arc length x. Choosing 30° and 90° as these values and solving the resulting equations, one immediately gets Bhaskara I's sine approximation formula.[2][3]

Assuming that x is in radians, one may seek an approximation to sin(x) in the following form:

The constants a, b, c, p, q and r (only five of them are independent) can be determined by assuming that the formula must be exactly valid when x = 0, π/6, π/2, π, and further assuming that it has to satisfy the property that sin(x) = sin(π - x).[2][3] This procedure produces the formula expressed using radian measure of angles. 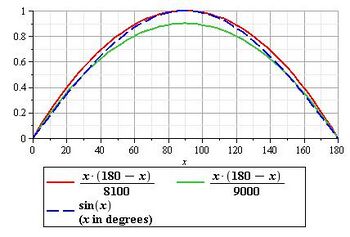 These expressions suggest a varying denominator which takes the value 90 × 90 when x = 90 and the value 2 × 30 × 150 when x = 30. That this expression should also be symmetrical about the line ' x = 90' rules out the possibility of choosing a linear expression in x. Computations involving x(180 − x) might immediately suggest that the expression could be of the form

A little experimentation (or by setting up and solving two linear equations in a and b) will yield the values a = 5/4, b = −1/4. These give Bhaskara I's sine approximation formula.[4]