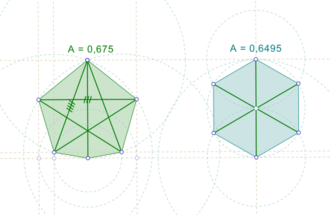 Biggest little polygon with 6 sides (on the left); on the right the regular polygon with same diameter but lower area.

In geometry, the biggest little polygon for a number n is the n-sided polygon that has diameter one (that is, every two of its points are within unit distance of each other) and that has the largest area among all diameter-one n-gons. One non-unique solution when n = 4 is a square, and the solution is a regular polygon when n is an odd number, but the solution is irregular otherwise.

For odd values of n, it was shown in by Karl Reinhardt in 1922 that a regular polygon has largest area among all diameter-one polygons.[2]

Even numbers of sides

In the case n = 6, the unique optimal polygon is not regular. The solution to this case was published in 1975 by Ronald Graham, answering a question posed in 1956 by Hanfried Lenz;[3] it takes the form of an irregular equidiagonal pentagon with an obtuse isosceles triangle attached to one of its sides, with the distance from the apex of the triangle to the opposite pentagon vertex equal to the diagonals of the pentagon.[4] Its area is 0.674981.... (sequence A111969 in the OEIS), a number that satisfies the equation

Graham conjectured that the optimal solution for the general case of even values of n consists in the same way of an equidiagonal (n − 1)-gon with an isosceles triangle attached to one of its sides, its apex at unit distance from the opposite (n − 1)-gon vertex. In the case n = 8 this was verified by a computer calculation by Audet et al.[5] Graham's proof that his hexagon is optimal, and the computer proof of the n = 8 case, both involved a case analysis of all possible n-vertex thrackles with straight edges.

The full conjecture of Graham, characterizing the solution to the biggest little polygon problem for all even values of n, was proven in 2007 by Foster and Szabo.[6]