In Euclidean geometry, a regular polygon is a polygon that is equiangular (all angles are equal in measure) and equilateral (all sides have the same length). Regular polygons may be either convex or star. In the limit, a sequence of regular polygons with an increasing number of sides approximates a circle, if the perimeter or area is fixed, or a regular apeirogon (effectively a straight line), if the edge length is fixed. 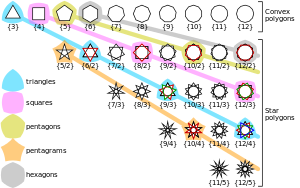 These properties apply to all regular polygons, whether convex or star.

A regular n-sided polygon has rotational symmetry of order n.

Together with the property of equal-length sides, this implies that every regular polygon also has an inscribed circle or incircle that is tangent to every side at the midpoint. Thus a regular polygon is a tangential polygon.

A regular n-sided polygon can be constructed with compass and straightedge if and only if the odd prime factors of n are distinct Fermat primes. See constructible polygon.

All regular simple polygons (a simple polygon is one that does not intersect itself anywhere) are convex. Those having the same number of sides are also similar.

An n-sided convex regular polygon is denoted by its Schläfli symbol {n}. For n < 3, we have two degenerate cases:

Monogon {1}
Degenerate in ordinary space. (Most authorities do not regard the monogon as a true polygon, partly because of this, and also because the formulae below do not work, and its structure is not that of any abstract polygon.)
Digon {2}; a "double line segment"
Degenerate in ordinary space. (Some authorities do not regard the digon as a true polygon because of this.)

In certain contexts all the polygons considered will be regular. In such circumstances it is customary to drop the prefix regular. For instance, all the faces of uniform polyhedra must be regular and the faces will be described simply as triangle, square, pentagon, etc.

For a regular convex n-gon, each interior angle has a measure of:

and each exterior angle (i.e., supplementary to the interior angle) has a measure of [math]\displaystyle{ \tfrac{360}{n} }[/math] degrees, with the sum of the exterior angles equal to 360 degrees or 2π radians or one full turn.

For a regular n-gon inscribed in a unit-radius circle, the product of the distances from a given vertex to all other vertices (including adjacent vertices and vertices connected by a diagonal) equals n.

Points in the plane

For a regular simple n-gon with circumradius R and distances di from an arbitrary point in the plane to the vertices, we have[1]

For a regular n-gon, the sum of the perpendicular distances from any interior point to the n sides is n times the apothem[2]:p. 72 (the apothem being the distance from the center to any side). This is a generalization of Viviani's theorem for the n=3 case.[3][4] 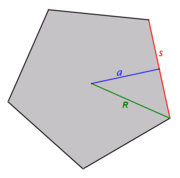 Regular pentagon (n = 5) with side s, circumradius R and apothem a

The sum of the perpendiculars from a regular n-gon's vertices to any line tangent to the circumcircle equals n times the circumradius.[2]:p. 73

The sum of the squared distances from the vertices of a regular n-gon to any point on its circumcircle equals 2nR2 where R is the circumradius.[2]:p.73

The sum of the squared distances from the midpoints of the sides of a regular n-gon to any point on the circumcircle is 2nR2 − ns2/4, where s is the side length and R is the circumradius.[2]:p. 73

Coxeter states that every zonogon (a 2m-gon whose opposite sides are parallel and of equal length) can be dissected into [math]\displaystyle{ \tbinom{n}{2} }[/math] or m(m-1)/2 parallelograms. These tilings are contained as subsets of vertices, edges and faces in orthogonal projections m-cubes.[5] In particular this is true for regular polygons with evenly many sides, in which case the parallelograms are all rhombi. The list OEIS: A006245 gives the number of solutions for smaller polygons.

The area A of a convex regular n-sided polygon having side s, circumradius R, apothem a, and perimeter p is given by[6][7]

Comparison of sizes of regular polygons with the same edge length, from three to sixty sides. The size increases without bound as the number of sides approaches infinity.

Of all n-gons with a given perimeter, the one with the largest area is regular.[18]

A regular n-gon can be constructed with compass and straightedge if n is the product of a power of 2 and any number of distinct Fermat primes (including none).

(A Fermat prime is a prime number of the form [math]\displaystyle{ 2^{(2^n)}+1. }[/math]) Gauss stated without proof that this condition was also necessary, but never published his proof. A full proof of necessity was given by Pierre Wantzel in 1837. The result is known as the Gauss–Wantzel theorem.

Equivalently, a regular n-gon is constructible if and only if the cosine of its common angle is a constructible number—that is, can be written in terms of the four basic arithmetic operations and the extraction of square roots.

A regular skew polygon in 3-space can be seen as nonplanar paths zig-zagging between two parallel planes, defined as the side-edges of a uniform antiprism. All edges and internal angles are equal.

More generally regular skew polygons can be defined in n-space. Examples include the Petrie polygons, polygonal paths of edges that divide a regular polytope into two halves, and seen as a regular polygon in orthogonal projection.

A non-convex regular polygon is a regular star polygon. The most common example is the pentagram, which has the same vertices as a pentagon, but connects alternating vertices.

The (non-degenerate) regular stars of up to 12 sides are:

m and n must be coprime, or the figure will degenerate.

The degenerate regular stars of up to 12 sides are:

Depending on the precise derivation of the Schläfli symbol, opinions differ as to the nature of the degenerate figure. For example, {6/2} may be treated in either of two ways:

In addition, the regular star figures (compounds), being composed of regular polygons, are also self-dual.

Regular polygons as faces of polyhedra

A quasiregular polyhedron is a uniform polyhedron which has just two kinds of face alternating around each vertex.

A regular polyhedron is a uniform polyhedron which has just one kind of face.

The remaining (non-uniform) convex polyhedra with regular faces are known as the Johnson solids.

A polyhedron having regular triangles as faces is called a deltahedron.