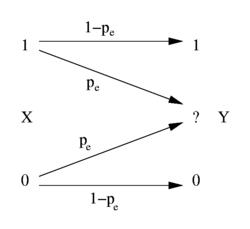 The channel model for the binary erasure channel showing a mapping from channel input X to channel output Y (with known erasure symbol ?). The probability of erasure is [math]\displaystyle{ p_e }[/math]

In coding theory and information theory, a binary erasure channel (BEC) is a communications channel model. A transmitter sends a bit (a zero or a one), and the receiver either receives the bit correctly, or with some probability [math]\displaystyle{ P_e }[/math] receives a message that the bit was not received ("erased") .

The BEC was introduced by Peter Elias of MIT in 1955 as a toy example.