A random variable (also called random quantity, aleatory variable, or stochastic variable) is a mathematical formalization of a quantity or object which depends on random events.[1] It is a mapping or a function from possible events in a sample space to a measurable space, often the real numbers. 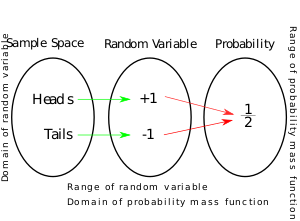 Informally, randomness typically represents some fundamental element of chance, such as in the roll of a dice; it may also represent uncertainty, such as measurement error.[1] However, the interpretation of probability is philosophically complicated, and even in specific cases is not always straightforward. The purely mathematical analysis of random variables is independent of such interpretational difficulties, and can be based upon a rigorous axiomatic setup.

According to George Mackey, Pafnuty Chebyshev was the first person "to think systematically in terms of random variables".[2]

Any random variable can be described by its cumulative distribution function, which describes the probability that the random variable will be less than or equal to a certain value.

The term "random variable" in statistics is traditionally limited to the real-valued case ([math]\displaystyle{ E=\mathbb{R} }[/math]). In this case, the structure of the real numbers makes it possible to define quantities such as the expected value and variance of a random variable, its cumulative distribution function, and the moments of its distribution.

This more general concept of a random element is particularly useful in disciplines such as graph theory, machine learning, natural language processing, and other fields in discrete mathematics and computer science, where one is often interested in modeling the random variation of non-numerical data structures. In some cases, it is nonetheless convenient to represent each element of [math]\displaystyle{ E }[/math], using one or more real numbers. In this case, a random element may optionally be represented as a vector of real-valued random variables (all defined on the same underlying probability space [math]\displaystyle{ \Omega }[/math], which allows the different random variables to covary). For example: 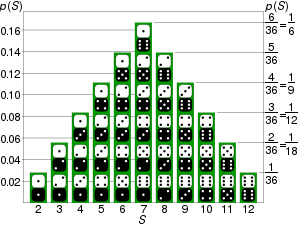 If the sample space is the set of possible numbers rolled on two dice, and the random variable of interest is the sum S of the numbers on the two dice, then S is a discrete random variable whose distribution is described by the probability mass function plotted as the height of picture columns here.

An example of a random variable of mixed type would be based on an experiment where a coin is flipped and the spinner is spun only if the result of the coin toss is heads. If the result is tails, X = −1; otherwise X = the value of the spinner as in the preceding example. There is a probability of ​1⁄2 that this random variable will have the value −1. Other ranges of values would have half the probabilities of the last example.

Most generally, every probability distribution on the real line is a mixture of discrete part, singular part, and an absolutely continuous part; see Lebesgue's decomposition theorem § Refinement. The discrete part is concentrated on a countable set, but this set may be dense (like the set of all rational numbers).

The most formal, axiomatic definition of a random variable involves measure theory. Continuous random variables are defined in terms of sets of numbers, along with functions that map such sets to probabilities. Because of various difficulties (e.g. the Banach–Tarski paradox) that arise if such sets are insufficiently constrained, it is necessary to introduce what is termed a sigma-algebra to constrain the possible sets over which probabilities can be defined. Normally, a particular such sigma-algebra is used, the Borel σ-algebra, which allows for probabilities to be defined over any sets that can be derived either directly from continuous intervals of numbers or by a finite or countably infinite number of unions and/or intersections of such intervals.[9]

The measure-theoretic definition is as follows.

This definition is a special case of the above because the set [math]\displaystyle{ \{(-\infty, r]: r \in \R\} }[/math] generates the Borel σ-algebra on the set of real numbers, and it suffices to check measurability on any generating set. Here we can prove measurability on this generating set by using the fact that [math]\displaystyle{ \{ \omega : X(\omega) \le r \} = X^{-1}((-\infty, r]) }[/math].

The last expression can be calculated in terms of the cumulative distribution of [math]\displaystyle{ X, }[/math] so

Suppose [math]\displaystyle{ X }[/math] is a random variable with a standard normal distribution, whose density is

Consider the random variable [math]\displaystyle{ Y = X^2. }[/math] We can find the density using the above formula for a change of variables:

The inverse transformation is

and its derivative is

This is a chi-squared distribution with one degree of freedom.

Suppose [math]\displaystyle{ X }[/math] is a random variable with a normal distribution, whose density is

Consider the random variable [math]\displaystyle{ Y = X^2. }[/math] We can find the density using the above formula for a change of variables:

The inverse transformation is

and its derivative is

This is a noncentral chi-squared distribution with one degree of freedom.

In increasing order of strength, the precise definition of these notions of equivalence is given below.

If the sample space is a subset of the real line, random variables X and Y are equal in distribution (denoted [math]\displaystyle{ X \stackrel{d}{=} Y }[/math]) if they have the same distribution functions:

Two random variables X and Y are equal almost surely (denoted [math]\displaystyle{ X \; \stackrel{\text{a.s.}}{=} \; Y }[/math]) if, and only if, the probability that they are different is zero:

For all practical purposes in probability theory, this notion of equivalence is as strong as actual equality. It is associated to the following distance:

where "ess sup" represents the essential supremum in the sense of measure theory.

Finally, the two random variables X and Y are equal if they are equal as functions on their measurable space:

This notion is typically the least useful in probability theory because in practice and in theory, the underlying measure space of the experiment is rarely explicitly characterized or even characterizable.

A significant theme in mathematical statistics consists of obtaining convergence results for certain sequences of random variables; for instance the law of large numbers and the central limit theorem.