Short description: Probability of an event occurring, given that another event has already occurred

For example, the probability that any given person has a cough on any given day may be only 5%. But if we know or assume that the person is sick, then they are much more likely to be coughing. For example, the conditional probability that someone unwell (sick) is coughing might be 75%, in which case we would have that P(Cough) = 5% and P(Cough|Sick) = 75%. Although there is a relationship between A and B in this example, such a relationship or dependence between A and B is not necessary, nor do they have to occur simultaneously.

P(A|B) may or may not be equal to P(A) (the unconditional probability of A). If P(A|B) = P(A), then events A and B are said to be independent: in such a case, knowledge about either event does not alter the likelihood of each other. P(A|B) (the conditional probability of A given B) typically differs from P(B|A). For example, if a person has dengue fever, the person might have a 90% chance of being tested as positive for the disease. In this case, what is being measured is that if event B (having dengue) has occurred, the probability of A (tested as positive) given that B occurred is 90%, simply writing P(A|B) = 90%. Alternatively, if a person is tested as positive for dengue fever, they may have only a 15% chance of actually having this rare disease due to high false positive rates. In this case, the probability of the event B (having dengue) given that the event A (testing positive) has occurred is 15% or P(B|A) = 15%. It should be apparent now that falsely equating the two probabilities can lead to various errors of reasoning, which is commonly seen through base rate fallacies.

On a tree diagram, branch probabilities are conditional on the event associated with the parent node. (Here, the overbars indicate that the event does not occur.)

Conditioning on an event

For a sample space consisting of equal likelihood outcomes, the probability of the event A is understood as the fraction of the number of outcomes in A to the number of all outcomes in the sample space. Then, this equation is understood as the fraction of the set [math]\displaystyle{ A \cap B }[/math] to the set B. Note that the above equation is a definition, not just a theoretical result. We denote the quantity [math]\displaystyle{ \frac{P(A \cap B)}{P(B)} }[/math] as [math]\displaystyle{ P(A\mid B) }[/math] and call it the "conditional probability of A given B."

As an axiom of probability

Some authors, such as de Finetti, prefer to introduce conditional probability as an axiom of probability:

As the probability of a conditional event

It can be shown that

which meets the Kolmogorov definition of conditional probability.[10]

Conditioning on an event of probability zero

The resulting limit is the conditional probability distribution of Y given X and exists when the denominator, the probability density [math]\displaystyle{ f_X(x_0) }[/math], is strictly positive.

The Borel–Kolmogorov paradox demonstrates this with a geometrical argument.

Conditioning on a discrete random variable

For a value x in V and an event A, the conditional probability is given by [math]\displaystyle{ P(A \mid X=x) }[/math]. Writing

for short, we see that it is a function of two variables, x and A.

Based on that, partial conditional probability can be defined as

Jeffrey conditionalization[13][14] is a special case of partial conditional probability, in which the condition events must form a partition:

Suppose that somebody secretly rolls two fair six-sided dice, and we wish to compute the probability that the face-up value of the first one is 2, given the information that their sum is no greater than 5.

Table 1 shows the sample space of 36 combinations of rolled values of the two dice, each of which occurs with probability 1/36, with the numbers displayed in the red and dark gray cells being D1 + D2.

Use in inference Example

If P(B) is not zero, then this is equivalent to the statement that

Similarly, if P(A) is not zero, then

This theorem could be useful in applications where multiple independent events are being observed.

The concepts of mutually independent events and mutually exclusive events are separate and distinct. The following table contrasts results for the two cases (provided that the probability of the conditioning event is not zero).

In fact, mutually exclusive events cannot be statistically independent (unless both of them are impossible), since knowing that one occurs gives information about the other (in particular, that the latter will certainly not occur).

These fallacies should not be confused with Robert K. Shope's 1978 "conditional fallacy", which deals with counterfactual examples that beg the question.

Assuming conditional probability is of similar size to its inverse

Main page: Confusion of the inverse 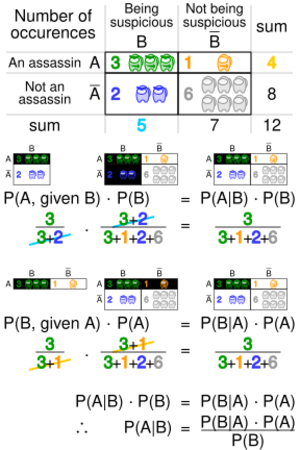 A geometric visualisation of Bayes' theorem. In the table, the values 3, 1, 2 and 6 give the relative weights of each corresponding condition and case. The figures denote the cells of the table involved in each metric, the probability being the fraction of each figure that is shaded. This shows that P(A|B) P(B) = P(B|A) P(A) i.e. P(A|B) = P(B|A) P(A)/P(B) . Similar reasoning can be used to show that P(Ā|B) = P(B|Ā) P(Ā)/P(B) etc.

In general, it cannot be assumed that P(A|B) ≈ P(B|A). This can be an insidious error, even for those who are highly conversant with statistics.[19] The relationship between P(A|B) and P(B|A) is given by Bayes' theorem:

Assuming marginal and conditional probabilities are of similar size

In general, it cannot be assumed that P(A) ≈ P(A|B). These probabilities are linked through the law of total probability:

This fallacy may arise through selection bias.[20] For example, in the context of a medical claim, let SC be the event that a sequela (chronic disease) S occurs as a consequence of circumstance (acute condition) C. Let H be the event that an individual seeks medical help. Suppose that in most cases, C does not cause S (so that P(SC) is low). Suppose also that medical attention is only sought if S has occurred due to C. From experience of patients, a doctor may therefore erroneously conclude that P(SC) is high. The actual probability observed by the doctor is P(SC|H).

Formally, P(A | B) is defined as the probability of A according to a new probability function on the sample space, such that outcomes not in B have probability 0 and that it is consistent with all original probability measures.[21][22]

Substituting 1 and 2 into 3 to select α:

So the new probability distribution is

Now for a general event A,