Kuiper is considered by many to be the father of modern planetary science.[1]

Kuiper, the son of a tailor in the village of Tuitjenhorn in North Holland, had an early interest in astronomy. He had extraordinarily sharp eyesight, allowing him to see with the naked eye magnitude 7.5 stars, about four times fainter than those visible to normal eyes.

He studied at Leiden University in 1924, where at the time a very large number of astronomers had congregated. He befriended fellow students Bart Bok and Pieter Oosterhoff, and was taught by Ejnar Hertzsprung, Antonie Pannekoek, Willem de Sitter, Jan Woltjer, Jan Oort, and the physicist Paul Ehrenfest. He received his candidate degree in Astronomy in 1927 and continued straight on with his graduate studies.

Kuiper finished his doctoral thesis on binary stars with Hertzsprung in 1933, after which he traveled to California to become a fellow under Robert Grant Aitken at the Lick Observatory. In 1935 he left to work at the Harvard College Observatory, where he met Sarah Parker Fuller, whom he married on 20 June 1936. Although he had planned to move to Java to work at the Bosscha Observatory, he took a position at the Yerkes Observatory of the University of Chicago and became an American citizen in 1937.

As professor at the University of Chicago, he was dissertation advisor to Carl Sagan. In 1958, the two worked on the classified military Project A119, a secret Air Force plan to detonate a nuclear warhead on the Moon.

Kuiper discovered two natural satellites of planets in the Solar System, namely Uranus's satellite Miranda and Neptune's satellite Nereid. In addition, he discovered carbon dioxide in the atmosphere of Mars, and the existence of a methane-laced atmosphere above Saturn's satellite Titan in 1944. Kuiper also pioneered airborne infrared observing using a Convair 990 aircraft in the 1960s.

Kuiper spent most of his career at the University of Chicago, but moved to Tucson, Arizona, in 1960 to found the Lunar and Planetary Laboratory at the University of Arizona. Kuiper served as the laboratory's director for the rest of his life. One of the three buildings at Arizona that makes up the LPL is named in his honor.

In the 1950s Kuiper's interdisciplinary collaboration with the geochemist and Nobel Laureate Harold C. Urey to understand the Moon's thermal evolution descended into acrimony, as the two engaged in what became known as the “Hot Moon Cold Moon” controversy. Their falling out, in part a scientific dispute, also reflected the challenge of maintaining professional relationships across overlapping but distinct scientific disciplines.[3]

In the 1960s, Kuiper helped identify landing sites on the Moon for the Apollo program.[lower-alpha 1] His earlier work on the Moon included the Project A119, a secret Air Force plan to detonate a nuclear warhead on the Moon.[5] Another scientist in the group was Carl Sagan, who was Kuiper's Ph.D. student at the time of the project.[5]

Kuiper discovered several binary stars which received "Kuiper numbers" to identify them, such as KUI 79.

Kuiper died on 23 December 1973 in Mexico City, after having a heart attack while on vacation with his wife.[6] 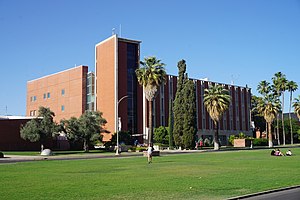 Besides the minor planet 1776 Kuiper, three craters (Mercurian, lunar, and Martian), Kuiper Scarp in Antarctica, and the now-decommissioned Kuiper Airborne Observatory was also named after him.

Astronomers refer to a region of minor planets beyond Neptune as the "Kuiper belt", since Kuiper had suggested that such small planets or comets may have formed there. However Kuiper himself believed that such objects would have been swept clear by planetary gravitational perturbations, so that none or few would exist there today.

The Kuiper Prize, named in his honor, is the most distinguished award given by the American Astronomical Society's Division for Planetary Sciences, an international society of professional planetary scientists.[lower-alpha 2]

Episode 6 ("The Man of a Trillion Worlds") of the TV series Cosmos: Possible Worlds featured the Kuiper-Urey conflict.