Lick Observatory is the world's first permanently occupied mountain-top observatory.[1] The observatory, in a Classical Revival style structure, was constructed between 1876 and 1887, from a bequest from James Lick (1796 – 1876) of $700,000 (approximately $22 million in 2014 dollars).[2][3] Lick, originally a carpenter and piano maker, chose the site atop Mount Hamilton and was buried there in 1887 under the future site of the telescope,[2] with a brass tablet bearing the inscription, "Here lies the body of James Lick".[4]

Layout of the Lick Observatory. The dome housing the 91-centimeter (36-inch) Great Lick refractor telescope is on the right. 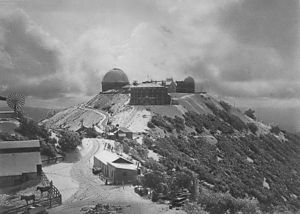 Lick additionally requested that Santa Clara County construct a "first-class road" to the summit, completed in 1876.[2] Lick chose John Wright, of San Francisco's Wright & Sanders firm of architects, to design both the Observatory and the Astronomer's House.[5] All of the construction materials had to be brought to the site by horse and mule-drawn wagons, which could not negotiate a steep grade. To keep the grade below 6.5%, the road had to take a very winding and sinuous path, which the modern-day road (California State Route 130) still follows. Tradition maintains that this road has exactly 365 turns (This is approximately correct, although uncertainty as to what should count as a turn makes precise verification impossible). The road is closed when there is snow at Lick Observatory.[6]

The first telescope installed at the observatory was a 12-inch (300-millimeter) refractor made by Alvan Clark. Astronomer E. E. Barnard used the telescope to make "exquisite photographs of comets and nebulae", according to D. J. Warner of Warner & Swasey Company.[2]

The 36-inch (91-centimeter) refracting telescope on Mt. Hamilton was Earth's largest refracting telescope during the period from when it saw first light on January 3, 1888, until the construction of Yerkes Observatory in 1897. Warner & Swasey designed and built the telescope mounting, with the 36-inch (91-centimeter) lens manufactured by one of the Clark sons, Alvan Graham. E. E. Barnard used the telescope in 1892 to discover a fifth moon of Jupiter, Amalthea. This was the first addition to Jupiter's known moons since Galileo observed the planet through his parchment tube and spectacle lens. The telescope provided spectra for W. W. Campbell's work on the radial velocities of stars.[2]

In 1905 (Jan. 5 and Feb. 27), Charles Dillon Perrine discovered the sixth and seventh moons of Jupiter (Elara and Himalia) on photographs taken with the 36-inch Crossley reflecting telescope which he had recently rebuilt.[7][8]

In May 1888, the observatory was turned over to the Regents of the University of California,[9] and it became the first permanently occupied mountain-top observatory in the world. Edward Singleton Holden was the first director. The location provided excellent viewing performance because of lack of ambient light and pollution; additionally, the night air at the top of Mt. Hamilton is extremely calm. Often a layer of low coastal clouds invades the valley below, especially on nights from late-spring to mid-summer, a phenomenon known in California as the June Gloom. On nights when the observatory remains above that layer, light pollution can be greatly reduced.

In 1928, Donald C. Shane studied carbon stars, and was able to distinguish them into spectral classes R0–R9 and N0–N7 (on this scale N7 is the reddest and R0 the bluest).[10] This was an expansion of Annie Jump Cannon of Harvard's work on carbon stars that had divided them into R and N types.[10] The N stars have more cyanogen and the R stars have more carbon.[10]

On May 21, 1939, during a nighttime fog that engulfed the summit, a U.S. Army Air Force Northrop A-17 two-seater attack plane crashed into the main building. Because a scientific meeting was being held elsewhere, the only staff member present was Nicholas Mayall. Nothing caught fire and the two individuals in the building were unharmed. The pilot of the plane, Lt. Richard F. Lorenz, and passenger Private W. E. Scott were killed instantly. The telephone line was broken by the crash, so no help could be called for at first. Eventually help arrived together with numerous reporters and photographers, who kept arriving almost all night long. Evidence of their numbers could be seen the next day by the litter of flash bulbs carpeting the parking lot. The press widely covered the accident and many reports emphasized the luck in not losing a large cabinet of spectrograms which was knocked over by the crash coming through an astronomer's office window. There was no damage to the telescope dome.[11][12][13][14]

In 1950, the California state legislature appropriated funds for a 120-inch (300-centimeter) reflector telescope, which was completed in 1959. The observatory additionally has a 24-inch (61-centimeter) Cassegrain reflector dedicated to photoelectric measurements of star brightness, and received a pair of 20-inch (51-centimeter) astrographs from the Carnegie Corporation.[2] 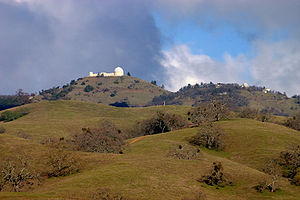 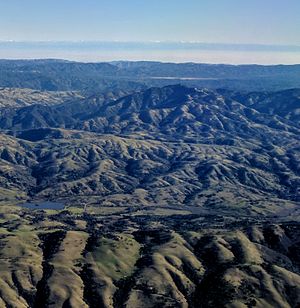 With the growth of San Jose, and the rest of Silicon Valley, light pollution became a problem for the observatory. In the 1970s, a site in the Santa Lucia Mountains at Junípero Serra Peak, southeast of Monterey, was evaluated for possible relocation of many of the telescopes. However, funding for the move was not available, and in 1980 San Jose began a program to reduce the effects of lighting, most notably replacing all streetlamps with low pressure sodium lamps. The result is that the Mount Hamilton site remains a viable location for a major working observatory. The International Astronomical Union named Asteroid 6216 San Jose to honor the city's efforts toward reducing light pollution.[16]

In 2006, there were 23 families in residence, plus typically between two and ten visiting astronomers from the University of California campuses, who stay in dormitories while working at the observatory. The little town of Mount Hamilton atop the mountain has its own police and a post office, and until 2005 had a one-room K-8 school.[17]

In 2008, there were 38 people residing on the mountain; the chef and commons dinner were decommissioned. By 2013, with continuing budget and staff cuts there remain only about nineteen residents and it is common for the observers to work from remote observing stations rather than make the drive, partly as a result of the business office raising the cost to stay in the dorms. The swimming pool has been closed.[18]

In 2013, one of Lick Observatory's key funding sources was scheduled for elimination in 2018, which many worried would result in the closing of the entire observatory.[19][20]

In November 2014, the University of California announced its intention to continue support of Lick Observatory.[21]

Telescopes at Lick Observatory are used by researchers from many campuses of the University of California system. Current topics of research carried out at Lick include exoplanets, supernovae, active galactic nuclei, planetary science, and development of new adaptive optics technologies.

In August 2020, the observatory was in danger of being destroyed by the rapidly growing SCU Lightning Complex fires. Firefighters were on standby at Lick Observatory to defend the buildings if necessary.[23] As of the evening of August 19, 2020, the fire was on observatory property and moving quickly.[24] While the residences on Mt. Hamilton sustained some damage during the following night, the telescopes and domes survived. [25] 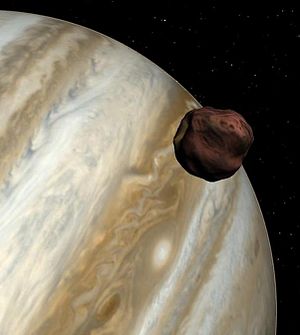 The following astronomical objects were discovered at Lick Observatory: 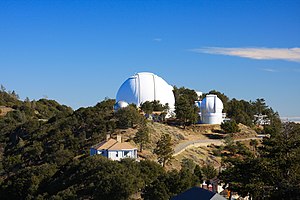 Below is a list of the nine telescopes (As of 2003) operating at the observatory:[41]

Below is a list of equipment that formerly operated at the observatory: