In geochemistry, paleoclimatology and paleoceanography δ18O or delta-O-18 is a measure of the ratio of stable isotopes oxygen-18 (18O) and oxygen-16 (16O). It is commonly used as a measure of the temperature of precipitation, as a measure of groundwater/mineral interactions, and as an indicator of processes that show isotopic fractionation, like methanogenesis. In paleosciences, 18O:16O data from corals, foraminifera and ice cores are used as a proxy for temperature.

where the standard has a known isotopic composition, such as Vienna Standard Mean Ocean Water (VSMOW).[1] The fractionation can arise from kinetic, equilibrium, or mass-independent fractionation. 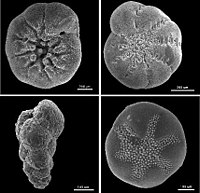 Foraminifera shells are composed of calcium carbonate (CaCO3) and are found in many common geological environments. The ratio of 18O to 16O in the shell is used to indirectly determine the temperature of the surrounding water at the time the shell was formed. The ratio varies slightly depending on the temperature of the surrounding water, as well as other factors such as the water's salinity, and the volume of water locked up in ice sheets.

Similarly, when water vapor condenses, heavier water molecules holding 18O atoms tend to condense and precipitate first. The water vapor gradient heading from the tropics to the poles gradually becomes more and more depleted of 18O. Snow falling in Canada has much less H218O than rain in Florida; similarly, snow falling in the center of ice sheets has a lighter δ18O signature than that at its margins, since heavier 18O precipitates first.

Solid samples (organic and inorganic) for oxygen isotope analysis are usually stored in silver cups and measured with pyrolysis and mass spectrometry[2]. Researchers need to avoid improper or prolonged storage of the samples for accurate measurements[2].

where T is the temperature in °C (based on a least-squares fit for a range of temperature values between 9 °C and 29 °C, with a standard deviation of ±0.6 °C, and δ is δ18O for a calcium carbonate sample).

Climate record as reconstructed by Lisiecki and Raymo (2005)

δ18O can be used with ice cores to determine the temperature from when the ice was formed.

Lisiecki and Raymo (2005) used measurements of δ18O in benthic foraminifera from 57 globally distributed deep sea sediment cores, taken as a proxy for the total global mass of glacial ice sheets, to reconstruct the climate for the past five million years.[4]

The stacked record of the 57 cores was orbitally tuned to an orbitally driven ice model, the Milankovitch cycles of 41 ky (obliquity), 26 ky (precession) and 100 ky (eccentricity), which are all assumed to cause orbital forcing of global ice volume. Over the past million years, there have been a number of very strong glacial maxima and minima, spaced by roughly 100 ky. As the observed isotope variations are similar in shape to the temperature variations recorded for the past 420 ky at Vostok Station, the figure shown on the right aligns the values of δ18O (right scale) with the reported temperature variations from the Vostok ice core (left scale), following Petit et al. (1999).[clarification needed]