The Apocrita are a suborder of insects in the order Hymenoptera. It includes wasps, bees, and ants, and consists of many families. It contains the most advanced hymenopterans and is distinguished from Symphyta by the narrow "waist" (petiole) formed between the first two segments of the actual abdomen; the first abdominal segment is fused to the thorax, and is called the propodeum. Therefore, it is general practice, when discussing the body of an apocritan in a technical sense, to refer to the mesosoma and metasoma (or "gaster") rather than the "thorax" and "abdomen", respectively. The evolution of a constricted waist was an important adaption for the parasitoid lifestyle of the ancestral apocritan, allowing more maneuverability of the female's ovipositor.[1] The ovipositor either extends freely or is retracted, and may be developed into a stinger for both defense and paralyzing prey. Larvae are legless and blind, and either feed inside a host (plant or animal) or in a nest cell provisioned by their mothers. 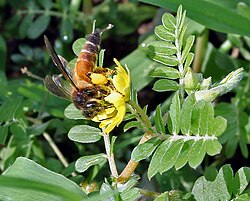 The Apocrita have historically been split into two groups, "Parasitica" and Aculeata, but these are rankless groupings in present classifications, if they appear at all. The term Parasitica is an artificial (paraphyletic) group comprising the majority of hymenopteran insects, with respective members living as parasitoids on what amounts to nearly half of all insects, and many noninsects.[2][3] Most species are small, with the ovipositor adapted for piercing. In some hosts, the parasitoids induce metamorphosis prematurely, and in others it is prolonged. There are even species that are hyperparasites, parasitoids on other parasitoids.[4] The Parasitica lay their eggs inside or on another insect (egg, larva or pupa) and their larvae grow and develop within or on that host. The host is nearly always killed. Many parasitic hymenopterans are used as biological control agents to control pests, such as caterpillars, true bugs and hoppers, flies, and weevils.[5]

The Aculeata are a monophyletic group that includes those species in which the female's ovipositor is modified into a stinger to inject venom. Groups include the familiar ants, bees, and various types of parasitic and predatory wasps; it also includes all of the social hymenopterans.[6]

The Apocrita contains a large number of families. Some traditional taxa such as the Parasitica (containing many families of parasitoid wasps) have been found on molecular analysis to be paraphyletic. Parasitoidism evolved once, and it is found today across most Apocritan families, though it has been secondarily lost several times. The phylogenetic tree gives a condensed overview of the phylogeny, illustrated with major groups. The tree is not fully resolved.[6][7][8][2]