Cellular noise is random variability in quantities arising in cellular biology. For example, cells which are genetically identical, even within the same tissue, are often observed to have different expression levels of proteins, different sizes and structures.[1][2] These apparently random differences can have important biological and medical consequences.[3] Cellular noise was originally, and is still often, examined in the context of gene expression levels – either the concentration or copy number of the products of genes within and between cells. As gene expression levels are responsible for many fundamental properties in cellular biology, including cells' physical appearance, behaviour in response to stimuli, and ability to process information and control internal processes, the presence of noise in gene expression has profound implications for many processes in cellular biology.

The most frequent quantitative definition of noise is the coefficient of variation:

Other quantities often used for mathematical convenience are the Fano factor:

and the normalized variance: 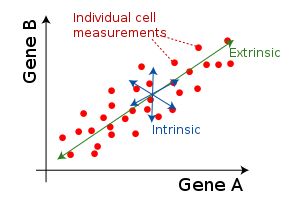 A schematic illustration of a dual reporter study. Each data point corresponds to a measurement of the expression level of two identically-regulated genes in a single cell: the scatter reflects measurements of a population of cells. Extrinsic noise is characterised by expression levels of both genes covarying between cells, intrinsic by internal differences.

Intrinsic and extrinsic noise levels are often compared in dual reporter studies, in which the expression levels of two identically-regulated genes (often fluorescent reporters like GFP and YFP) are plotted for each cell in a population.[7]

An issue with the general depiction of extrinsic noise as a spread along the main diagonal in dual-reporter studies is the assumption that extrinsic factors cause positive expression correlations between the two reporters. In fact, when the two reporters compete for binding of a low-copy regulator, the two reporters become anomalously anticorrelated, and the spread is perpendicular to the main diagonal. In fact, any deviation of the dual-reporter scatter plot from circular symmetry indicates extrinsic noise. Information theory offers a way to avoid this anomaly.[8]

Note: These lists are illustrative, not exhaustive, and identification of noise sources is an active and expanding area of research.

Note: These lists are illustrative, not exhaustive, and identification of noise effects is an active and expanding area of research.

A canonical model for stochastic gene expression, known as the two-state or telegraph [31] model. DNA flips between "inactive" and "active" states (involving, for example, chromatin remodelling and transcription factor binding). Active DNA is transcribed to produce mRNA which is translated to produce protein, both of which are degraded. All processes are Poissonian with given rates.

As many quantities of cell biological interest are present in discrete copy number within the cell (single DNAs, dozens of mRNAs, hundreds of proteins), tools from discrete stochastic mathematics are often used to analyse and model cellular noise.[32][33] In particular, master equation treatments – where the probabilities [math]\displaystyle{ P(\mathbf{x},t) }[/math] of observing a system in a state [math]\displaystyle{ \mathbf{x} }[/math] at time [math]\displaystyle{ t }[/math] are linked through ODEs – have proved particularly fruitful. A canonical model for noise gene expression, where the processes of DNA activation, transcription and translation are all represented as Poisson processes with given rates, gives a master equation which may be solved exactly (with generating functions) under various assumptions or approximated with stochastic tools like Van Kampen's system size expansion.

Numerically, the Gillespie algorithm or stochastic simulation algorithm is often used to create realisations of stochastic cellular processes, from which statistics can be calculated.

The problem of inferring the values of parameters in stochastic models (parametric inference) for biological processes, which are typically characterised by sparse and noisy experimental data, is an active field of research, with methods including Bayesian MCMC and approximate Bayesian computation proving adaptable and robust.[34] Regarding the two-state model, a moment-based method was described for parameters inference from mRNAs distributions.[31]