In Bayesian statistics, the recent development of MCMC methods has made it possible to compute large hierarchical models that require integrations over hundreds to thousands of unknown parameters.[5]

In rare event sampling, they are also used for generating samples that gradually populate the rare failure region. 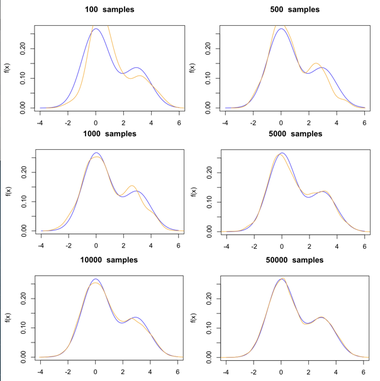 Convergence of the Metropolis–Hastings algorithm. Markov chain Monte Carlo attempts to approximate the blue distribution with the orange distribution.

Markov chain Monte Carlo methods create samples from a continuous random variable, with probability density proportional to a known function. These samples can be used to evaluate an integral over that variable, as its expected value or variance.

Practically, an ensemble of chains is generally developed, starting from a set of points arbitrarily chosen and sufficiently distant from each other. These chains are stochastic processes of "walkers" which move around randomly according to an algorithm that looks for places with a reasonably high contribution to the integral to move into next, assigning them higher probabilities.

Random walk Monte Carlo methods are a kind of random simulation or Monte Carlo method. However, whereas the random samples of the integrand used in a conventional Monte Carlo integration are statistically independent, those used in MCMC are autocorrelated. Correlations of samples introduces the need to use the Markov chain central limit theorem when estimating the error of mean values.

These algorithms create Markov chains such that they have an equilibrium distribution which is proportional to the function given.

While MCMC methods were created to address multi-dimensional problems better than generic Monte Carlo algorithms, when the number of dimensions rises they too tend to suffer the curse of dimensionality: regions of higher probability tend to stretch and get lost in an increasing volume of space that contributes little to the integral. One way to address this problem could be shortening the steps of the walker, so that it doesn't continuously try to exit the highest probability region, though this way the process would be highly autocorrelated and expensive (i.e. many steps would be required for an accurate result). More sophisticated methods such as Hamiltonian Monte Carlo and the Wang and Landau algorithm use various ways of reducing this autocorrelation, while managing to keep the process in the regions that give a higher contribution to the integral. These algorithms usually rely on a more complicated theory and are harder to implement, but they usually converge faster.

The advantage of low-discrepancy sequences in lieu of random numbers for simple independent Monte Carlo sampling is well known.[17] This procedure, known as Quasi-Monte Carlo method (QMC),[18] yields an integration error that decays at a superior rate to that obtained by IID sampling, by the Koksma-Hlawka inequality. Empirically it allows the reduction of both estimation error and convergence time by an order of magnitude. The Array-RQMC method combines randomized quasi–Monte Carlo and Markov chain simulation by simulating [math]\displaystyle{ n }[/math] chains simultaneously in a way that the empirical distribution of the [math]\displaystyle{ n }[/math] states at any given step is a better approximation of the true distribution of the chain than with ordinary MCMC.[19] In empirical experiments, the variance of the average of a function of the state sometimes converges at rate [math]\displaystyle{ O(n^{-2}) }[/math] or even faster, instead of the [math]\displaystyle{ O(n^{-1}) }[/math] Monte Carlo rate.[20]

Usually it is not hard to construct a Markov chain with the desired properties. The more difficult problem is to determine how many steps are needed to converge to the stationary distribution within an acceptable error.[21] A good chain will have rapid mixing: the stationary distribution is reached quickly starting from an arbitrary position. A standard empirical method to assess convergence is to run several independent simulated Markov chains and check that the ratio of inter-chain to intra-chain variances for all the parameters sampled is close to 1.[21][22]

Typically, Markov chain Monte Carlo sampling can only approximate the target distribution, as there is always some residual effect of the starting position. More sophisticated Markov chain Monte Carlo-based algorithms such as coupling from the past can produce exact samples, at the cost of additional computation and an unbounded (though finite in expectation) running time.

Many random walk Monte Carlo methods move around the equilibrium distribution in relatively small steps, with no tendency for the steps to proceed in the same direction. These methods are easy to implement and analyze, but unfortunately it can take a long time for the walker to explore all of the space. The walker will often double back and cover ground already covered.

Further consideration of convergence is at Markov chain central limit theorem. See [23] for a discussion of the theory related to convergence and stationarity of the Metropolis–Hastings algorithm.