This is a list of the longest-living biological organisms: the individual(s) (or in some instances, clones) of a species with the longest natural maximum lifespans. For a given species, such a designation may include:

The definition of "longest-living" used in this article considers only the observed or estimated length of an individual organism's natural lifespan – that is, the duration of time between its birth or conception, or the earliest emergence of its identity as an individual organism, and its death – and does not consider other conceivable interpretations of "longest-living", such as the length of time between the earliest appearance of a species in the fossil record and the present (the historical "age" of the species as a whole), the time between a species' first speciation and its extinction (the phylogenetic "lifespan" of the species), or the range of possible lifespans of a species' individuals. This list includes long-lived organisms that are currently still alive as well as those that are dead.

Determining the length of an organism's natural lifespan is complicated by many problems of definition and interpretation, as well as by practical difficulties in reliably measuring age, particularly for extremely old organisms and for those that reproduce by asexual cloning. In many cases, the ages listed below are estimates based on observed present-day growth rates, which may differ significantly from the growth rates experienced thousands of years ago. Identifying the longest-living organisms also depends on defining what constitutes an "individual" organism, which can be problematic, since many asexual organisms and clonal colonies defy one or both of the traditional colloquial definitions of individuality (having a distinct genotype and having an independent, physically separate body). Additionally, some organisms maintain the capability to reproduce through very long periods of metabolic dormancy, during which they may not be considered "alive" by certain definitions but nonetheless can resume normal metabolism afterward; it is unclear whether the dormant periods should be counted as part of the organism's lifespan.

Hydras may not grow old

Individuals of other species have been observed to regress to a larval state and regrow into adults multiple times. The hydrozoan species Turritopsis dohrnii (formerly Turritopsis nutricula) is capable of cycling from a mature adult stage to an immature polyp stage and back again. This means no natural limit to its lifespan is known.[3] However, no single specimen has been observed for any extended period, and estimating the age of a specimen is not possible by any known means. At least one other hydrozoan (Laodicea undulata[4]) and one scyphozoan (Aurelia sp.1[5]) can also revert from a medusa stage into a polyp stage.

Similarly, the larvae of skin beetles undergo a degree of "reversed development" when starved, and later grow back to the previously attained level of maturity. This cycle can be repeated many times.[6]

Revived into activity after stasis

If the definition of lifespan does not exclude time spent in metabolically inactive states, many organisms may be said to have lifespans that are millions of years in length. Various claims have been made about reviving bacterial spores to active metabolism after millions of years of dormancy. Spores preserved in amber have been revived after 40 million years,[7] and spores from salt deposits in New Mexico have been revived after 250 million years, making these bacteria by far the longest-living organisms ever recorded.[8] In a related find, a scientist was able to coax 34,000-year-old salt-captured bacteria to reproduce. These results were subsequently duplicated independently.[9]

This Judean date palm sprouted from a 2,000-year-old seed

In July 2018, scientists from four Russian institutions collaborating with Princeton University reported that they had analyzed about 300 prehistoric nematode worms recovered from permafrost above the Arctic Circle in Sakha Republic, and that after being thawed, two of the nematodes revived and began moving and eating. One found in a Pleistocene squirrel burrow in the Duvanny Yar outcrop on the Kolyma River was believed to be about 32,000 years old, while the other, recovered in 2015 near the Alazeya River, was dated at approximately 30,000-40,000 years old. These nematodes were believed to be the oldest living multicellular animals on Earth.[10][11]

Like bacterial spores, plant seeds are often capable of germinating after very long periods of metabolic inactivity. A seed from the previously extinct Judean date palm was revived and managed to sprout after nearly 2,000 years. Named "Methuselah", it is currently growing at Kibbutz Keturah, Israel.[12] Similarly, Silene stenophylla was grown from fruit found in an ancient squirrel's cache. The germinated plants bore viable seeds. The fruit was dated at 31,800 ± 300 years old.[13] In 1994, a seed from a sacred lotus (Nelumbo nucifera), dated at roughly 1,300 ± 270 years old, was successfully germinated.[14][15]

During the 1990s, Raul Cano, a microbiologist at California Polytechnic State University, San Luis Obispo, US, reported reviving yeast trapped in amber for 25 million years, although doubts were raised as to its antiquity.[16][17](citation?) Cano founded a brewery[18] and crafted an "amber ale" with a 45-million-year-old variant of Saccharomyces cerevisiae.[19]

Some endoliths have extremely long lives. In August 2013, researchers reported evidence of endoliths in the ocean floor, perhaps millions of years old, with a generation time of 10,000 years.[20] These are slowly metabolizing and not in a dormant state. Some Actinobacteria found in Siberia are estimated to be half a million years old.[21][22][23]

In July 2020, marine biologists reported that aerobic microorganisms (mainly), in "quasi-suspended animation", were found in organically poor sediments, up to 101.5 million years old, 68.9 metres (226 feet) below the seafloor in the South Pacific Gyre (SPG) ("the deadest spot in the ocean"), and could be the longest-living life forms ever found.[24][25] 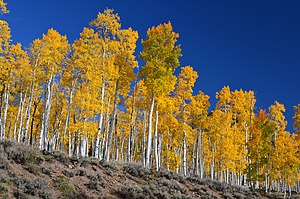 As with all long-lived plant and fungal species, no individual part of a clonal colony is alive (in the sense of active metabolism) for more than a very small fraction of the life of the entire colony. Some clonal colonies may be fully connected via their root systems, while most are not actually interconnected but are nonetheless genetically identical clones which populated an area through vegetative reproduction. Ages for clonal colonies are estimates, often based on current growth rates.[26] 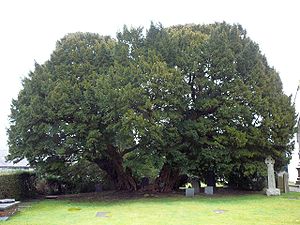 The Llangernyw Yew may be the oldest tree in Europe 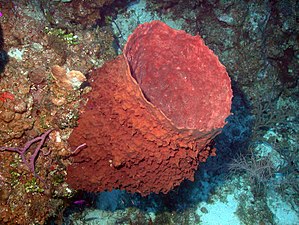 Life expectancy by country in 2019

These are single examples; for a broader view, see life expectancy (includes humans).

Other terrestrial and pagophilic animals