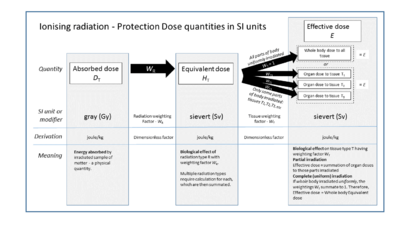 In ionizing radiation dosimetry RBE is now represented in the recommendations of the International Commission on Radiological Protection (ICRP) by the radiation weighting factor, (WR) for each type of radiation; it was formerly the quality factor (Q).[1]

These weighting factors convert absorbed dose (measured in SI units of grays or non-SI rads) into formal biological equivalent dose for radiation exposure (measured in units of sieverts or rem). The higher the RBE or weighting factor for a type of radiation, the more damaging it is, and this is incorporated into the calculation to convert from gray to sievert units (see accompanying diagram).

Different types of radiation have different biological effectiveness mainly because they transfer their energy to the tissue in different ways. Photons and beta particles have a low linear energy transfer coefficient, meaning that they ionize atoms in the tissue that are spaced by several hundred nanometers (several tenths of a micrometer) apart, along their path. In contrast, the much more massive alpha particles and neutrons leave a denser trail of ionized atoms in their wake, spaced about one tenth of a nanometer apart (i.e., less than one-thousandth of the typical distance between ionizations for photons and beta particles).

The concept of RBE is relevant in medicine, such as in radiology and radiotherapy, and to the evaluation of risks and consequences of radioactive contamination in various contexts, such as nuclear power plant operation, nuclear fuel disposal and reprocessing, nuclear weapons, uranium mining, and ionizing radiation safety.

The radiation weighting factor for neutrons has been revised over time and remains controversial.

To bypass the complexity of tissue dependence, the ICRP defined standard radiation weighting factors, independently of tissue type, to be used for risk and exposure assessment in radiology and the nuclear industry.[2] These values are conservatively chosen to be greater than the bulk of experimental values observed for the most sensitive cell types, with respect to external (external to the cell) sources. Values for internal sources for heavy ions, such as a recoil nucleus, have not been developed. The ICRP 2007 standard values for relative effectiveness are given below. 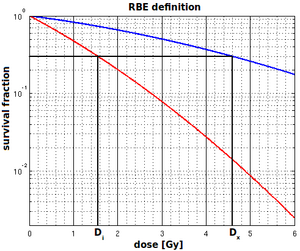 Typically the evaluation of relative biological effectiveness is done on various types of living cells grown in culture medium, including prokaryotic cells such as bacteria, simple eukaryotic cells such as single celled plants, and advanced eukaryotic cells derived from organisms such as rats. The doses are adjusted to the LD-30 point; that is, to the amount that will cause 30% of the cells to become unable to undergo mitotic division (or, for bacteria, binary fission), thus being effectively sterilized — even if they can still carry out other cellular functions. LD-50 is more commonly used, but whoever drew the plot did not realise that the grid line closest to halfway between factors of 10 on a log plot is actually 3, not 5. LD-50 values are actually 1 gray for Carbon ions and 3 grays for photons.

The types R of ionizing radiation most considered in RBE evaluation are X-rays and gamma radiation (both consisting of photons), alpha radiations (helium-4 nuclei), beta radiation (electrons and positrons), neutron radiation, and heavy nuclei, including the fragments of nuclear fission. For some kinds of radiation, the RBE is strongly dependent on the energy of the individual particles.

Early on it was found that X-rays, gamma rays, and beta radiation were essentially equivalent for all cell types. Therefore, the standard radiation type X is generally an X-ray beam with 250 keV photons or cobalt-60 gamma rays. As a result, the relative biological effectiveness of beta and photon radiation is essentially 1.

In the early experiments, the sources of radiation were all external to the cells that were irradiated. However, since alpha particles cannot traverse the outermost dead layer of human skin, they can do significant damage only if they come from the decay of atoms inside the body. Since the range of an alpha particle is typically about the diameter of a single eukaryotic cell, the precise location of the emitting atom in the tissue cells becomes significant.

For this reason, it has been suggested that the health impact of contamination by alpha emitters might have been substantially underestimated.[4] Measurements of RBE with external sources also neglect the ionization caused by the recoil of the parent-nucleus due to the alpha decay. While the recoil of the parent-nucleus of the decaying atom typically carries only about 2% of the energy of the alpha-particle that is emitted by the decaying atom, its range is extremely short (about 2–3 angstroms), due to its high electric charge and high mass. The parent nucleus is required to recoil, upon emission of an alpha particle, with a discrete kinetic energy due to conservation of momentum. Thus, all of the ionization energy from the recoil-nucleus is deposited in an extremely small volume near its original location, typically in the cell nucleus on the chromosomes, which have an affinity for heavy metals.[5][6][7] The bulk of studies, using sources that are external to the cell, have yielded RBEs between 10 and 20.[8]