Short description: Unit of Length; one millionth of a metre

The micrometre (international spelling as used by the International Bureau of Weights and Measures;[1] SI symbol: μm) or micrometer (American spelling), also commonly known as a micron, is an SI derived unit of length equalling 1×10−6 metre (SI standard prefix "micro-" = 10−6); that is, one millionth of a metre (or one thousandth of a millimetre, 0.001 mm, or about 0.00004 inch).[1]

The nearest smaller common SI unit is the nanometre, equivalent to one one-thousandth of a micrometre, or one billionth of a metre (0.000000001 m).

The micrometre is a common unit of measurement for wavelengths of infrared radiation as well as sizes of biological cells and bacteria,[1] and for grading wool by the diameter of the fibres.[2] The width of a single human hair ranges from approximately 20 to 200 μm. The longest human chromosome, chromosome 1, is approximately 10 μm in length. 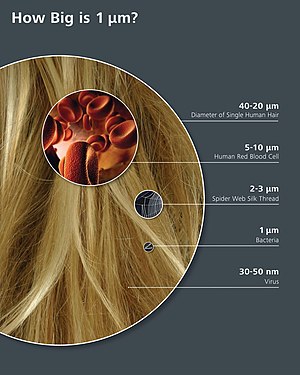 How big is 1 micrometre?

The term micron and the symbol μ were officially accepted for use in isolation to denote the micrometre in 1879, but officially revoked by the International System of Units (SI) in 1967.[7] This became necessary because the older usage was incompatible with the official adoption of the unit prefix micro-, denoted μ, during the creation of the SI in 1960.

Additionally, in American English, the use of "micron" helps differentiate the unit from the micrometer, a measuring device, because the unit's name in mainstream American spelling is a homograph of the device's name. In spoken English, they may be distinguished by pronunciation, as the name of the measuring device is often stressed on the second syllable (/maɪˈkrɒmɪtər/ my-KROM-it-ər), whereas the systematic pronunciation of the unit name, in accordance with the convention for pronouncing SI units in English, places the stress on the first syllable (/ˈmaɪkroʊˌmiːtər/ MY-kroh-meet-ər).

The plural of micron is normally microns, though micra was occasionally used before 1950.[8][9][10]

The official symbol for the SI prefix micro- is a Greek lowercase mu.[11] In Unicode, there is also a micro sign with the code point U+00B5 (µ), distinct from the code point U+03BC (μ) of the Greek letter lowercase mu. According to the Unicode Consortium, the Greek letter character is preferred,[12] but implementations must recognize the micro sign as well. Most fonts use the same glyph for the two characters.