The principal importance of GaInAs is its application as a high-speed, high sensitivity photodetector of choice for optical fiber telecommunications.[1]

Indium gallium arsenide (InGaAs) and gallium-indium arsenide (GaInAs) are used interchangeably. According to IUPAC standards[2] the preferred nomenclature for the alloy is GaxIn1-xAs where the group-III elements appear in order of increasing atomic number, as in the related alloy system AlxGa1-xAs. By far, the most important alloy composition from technological and commercial standpoints is Ga0.47In0.53As, which can be deposited in single crystal form on indium phosphide (InP).

GaInAs is not a naturally-occurring material. Single crystal material is required for electronic and photonic device applications. Pearsall and co-workers were the first to describe single-crystal epitaxial growth of In0.53Ga0.47As on (111)-oriented [3] and on (100)-oriented [4] InP substrates. Single crystal material in thin-film form can be grown by epitaxy from the liquid-phase (LPE), vapour-phase (VPE), by molecular beam epitaxy (MBE), and by metalorganic chemical vapour deposition (MO-CVD).[5] Today, most commercial devices are produced by MO-CVD or by MBE.

The optical and mechanical properties of InGaAs can be varied by changing the ratio of InAs and GaAs, In1-xGaxAs.[6] Most InGaAs devices are grown on indium phosphide (InP) substrates. In order to match the lattice constant of InP and avoid mechanical strain, In0.53Ga0.47As is used. This composition has an optical absorption edge at 0.75 eV, corresponding to a cut-off wavelength of λ=1.68 μm at 295 K.

By increasing the mole fraction of InAs further compared to GaAs, it is possible to extend the cut-off wavelength up to about λ=2.6 μm. In that case special measures have to be taken to avoid mechanical strain from differences in lattice constants.

GaAs is lattice-mismatched to germanium (Ge) by 0.08%. With the addition of 1.5% InAs to the alloy, In0.015Ga0.985As becomes latticed-matched to the Ge substrate, reducing stress in subsequent deposition of GaAs.

InGaAs has a lattice parameter that increases linearly with the concentration of InAs in the alloy.[7] The liquid-solid phase diagram[3] shows that during solidification from a solution containing GaAs and InAs, GaAs is taken up at a much higher rate than InAs, depleting the solution of GaAs. During growth from solution, the composition of first material to solidify is rich in GaAs while the last material to solidify is richer in InAs. This feature has been exploited to produce ingots of InGaAs with graded composition along the length of the ingot. However, the strain introduced by the changing lattice constant causes the ingot to be polycrystalline and limits the characterization to a few parameters, such as bandgap and lattice constant with uncertainty due to the continuous compositional grading in these samples. 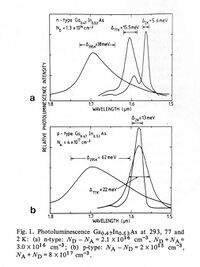 Single crystal epitaxial films of GaInAs can be deposited on a single crystal substrate of III-V semiconductor having a lattice parameter close to that of the specific gallium indium arsenide alloy to be synthesized. Three substrates can be used: GaAs, InAs and InP. A good match between the lattice constants of the film and substrate is required to maintain single crystal properties and this limitation permits small variations in composition on the order of a few per cent. Therefore, the properties of epitaxial films of GaInAs alloys grown on GaAs are very similar to GaAs and those grown on InAs are very similar to InAs, because lattice mismatch strain does not generally permit significant deviation of the composition from the pure binary substrate.

Ga0.47In0.53As is the alloy whose lattice parameter matches that of InP at 295 K. GaInAs lattice-matched to InP is a semiconductor with properties quite different from GaAs, InAs or InP. It has an energy band gap of 0.75 eV, an electron effective mass of 0.041 and an electron mobility close to 10,000 cm2·V−1·s−1 at room temperature, all of which are more favorable for many electronic and photonic device applications when compared to GaAs, InP or even Si.[1] Measurements of the band gap and electron mobility of single-crystal GaInAs were first published by Takeda and co-workers.[9]

Like most materials, the lattice parameter of GaInAs is a function of temperature. The measured coefficient of thermal expansion [13] is 5.66×10−6 K−1. This is significantly larger than the coefficient for InP which is 4.56×10−6 K−1. A film that is exactly lattice-matched to InP at room temperature is typically grown at 650 °C with a lattice mismatch of +6.5×10−4. Such a film has a mole fraction of GaAs = 0.47. To obtain lattice matching at the growth temperature, it is necessary to increase the GaAs mole fraction to 0.48.

The bandgap energy of GaInAs can be determined from the peak in the photoluminescence spectrum, provided that the total impurity and defect concentration is less than 5×1016 cm−3. The bandgap energy depends on temperature and increases as the temperature decreases, as can be seen in Fig. 3 for both n-type and p-type samples. The bandgap energy at room temperature is 0.75 eV and lies between that of Ge and Si. By coincidence the bandgap of GaInAs is perfectly placed for photodetector and laser applications for the long-wavelength transmission window, (the C-band and L-band) for fiber-optic communications.

The valence band has two types of charge carriers: light holes: m*/m° = 0.051 [11] and heavy holes: m*/m° = 0.2.[14] The electrical and optical properties of the valence band are dominated by the heavy holes, because the density of these states is much greater than that for light holes. This is also reflected in the mobility of holes at 295 K, which is a factor of 40 lower than that for electrons. 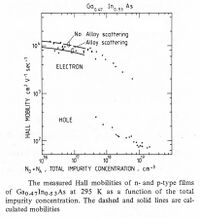 Fig.4 Electron and hole mobilities of GaInAs vs impurity concentration at 295 K.[12]

Mobility of electrons and holes

Electron mobility and hole mobility are key parameters for design and performance of electronic devices. Takeda and co-workers were the first to measure electron mobility in epitaxial films of InGaAs on InP substrates.[9] Measured carrier mobilities for electrons and holes are shown in Figure 4.

The mobility of carriers in Ga0.47In0.53As is unusual in two regards:

The room temperature electron mobility for reasonably pure samples of Ga0.47In0.53As approaches 10×103 cm2·V−1·s−1, which is the largest of any technologically important semiconductor, although significantly less than that for graphene.

The mobility is proportional to the carrier conductivity. As mobility increases, so does the current-carrying capacity of transistors. A higher mobility shortens the response time of photodetectors. A larger mobility reduces series resistance, and this improves device efficiency and reduces noise and power consumption.

The minority carrier diffusion constant is directly proportional to carrier mobility. The room temperature diffusion constant for electrons at 250 cm2·s−1 is significantly larger than that of Si, GaAs, Ge or InP, and determines the ultra-fast response of Ga0.47In0.53As photodetectors.

The ratio of electron to hole mobility is the largest of currently-used semiconductors. 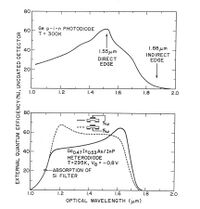 Avalanche photodiodes offer the advantage of additional gain at the expense of response time. These devices are especially useful for detection of single photons in applications such as quantum key distribution where response time is not critical. Avalanche photodetectors require a special structure to reduce reverse leakage current due to tunnelling. The first practical avalanche photodiodes were designed and demonstrated in 1979.[18]

In 1980, Pearsall developed a photodiode design that exploits the uniquely short diffusion time of high mobility of electrons in GaInAs, leading to an ultrafast response time.[19][20] This structure was further developed and subsequently named the UTC, or uni-travelling carrier photodiode.[21] In 1989, Wey and co-workers[22] designed and demonstrated a p-i-n GaInAs/InP photodiodes with a response time shorter than 5 picoseconds for a detector surface measuring 5 μm x 5 μm.

Other important innovations include the integrated photodiode – FET receiver[23] and the engineering of GaInAs focal-plane arrays.[24]

Semiconductor lasers are an important application for GaInAs, following photodetectors. GaInAs can be used as a laser medium. Devices have been constructed that operate at wavelengths of 905 nm, 980 nm, 1060 nm, and 1300 nm. InGaAs quantum dots on GaAs have also been studied as lasers.[25] GaInAs/InAlAs quantum-well lasers can be tuned to operate at the λ = 1500 nm low-loss, low-dispersion window for optical fiber telecommunications [26] In 1994, GaInAs/AlInAs quantum wells were used by Jérôme Faist and co-workers [27] who invented and demonstrated a new kind of semiconductor laser based on photon emission by an electron making an optical transition between subbands in the quantum well. They showed that the photon emission regions can be cascaded in series, creating the quantum cascade laser (QCL). The energy of photon emission is a fraction of the bandgap energy. For example, GaInAs/AlInAs QCL operates at room temperature in the wavelength range 3 μm < λ < 8 μm. The wavelength can be changed by modifying the width of the GaInAs quantum well.[28] These lasers are widely used for chemical sensing and pollution control.

GaInAs is used in triple-junction photovoltaics and also for thermophotovoltaic power generation.[29]

HEMT devices using InGaAs channels are one of the fastest types of transistor[30](citation?)

In 2012 MIT researchers announced the smallest transistor ever built from a material other than silicon.[31] The Metal oxide semiconductor field-effect transistor (MOSFET) is 22 nanometers long. This is a promising accomplishment, but more work is needed to show that the reduced size results in improved electronic performance relative to that of silicon or GaAs-based transistors.

In 2014, Researchers at Penn State University developed a novel device prototype designed to test nanowires made of compound semiconductors such as InGaAs.[32] The goal of this device was to see if a compound material would retain its superior mobility at nanoscale dimensions in a FinFET device configuration. The results of this test sparked more research, by the same research team, into transistors made of InGaAs which showed that in terms of on current at lower supply voltage, InGaAs performed very well compared to existing silicon devices.

The synthesis of GaInAs, like that of GaAs, most often involves the use of arsine (AsH3), an extremely toxic gas. Synthesis of InP likewise most often involves phosphine (PH3). Inhalation of these gases neutralizes oxygen absorption by the bloodstream and can be fatal within a few minutes if toxic dose levels are exceeded. Safe handling involves using a sensitive toxic gas detection system and self-contained breathing apparatus.[34]

Once GaInAs is deposited as a thin film on a substrate, it is basically inert and is resistant to abrasion, sublimation or dissolution by common solvents such as water, alcohols or acetones. In device form the volume of the GaInAs is usually less than 1000 μm3, and can be neglected compared to the volume of the supporting substrate, InP or GaAs.

The National Institutes of Health studied these materials and found:[35]

REACH (Registration, Evaluation, Authorisation and Restriction of Chemicals) is a European initiative to classify and regulate materials that are used, or produced (even as waste) in manufacturing. REACH considers three toxic classes: carcinogenic, reproductive, and mutagenic capacities.

The REACH classification procedure consists of two basic phases. In phase one the hazards intrinsic to the material are determined, without any consideration of how the material might be used or encountered in the work place or by a consumer. In phase two the risk of harmful exposure is considered along with procedures that can mitigate exposure. Both GaAs and InP are in phase 1 evaluation. The principal exposure risk occurs during substrate preparation where grinding and polishing generate micron-size particles of GaAs and InP. Similar concerns apply to wafer dicing to make individual devices. This particle dust can be absorbed by breathing or ingestion. The increased ratio of surface area to volume for such particles increases their chemical reactivity.

Toxicology studies are based on rat and mice experiments. No comparable studies test the effects of ingesting GaAs or InP dust in a liquid slurry.

The REACH procedure, acting under the precautionary principle, interprets "inadequate evidence for carcenogenicity" as "possible carcinogen". As a result, the European Chemicals Agency classified InP in 2010 as a carcinogen and reproductive toxin:[37]

and ECHA classified GaAs in 2010 as a carcinogen and reproductive toxin: