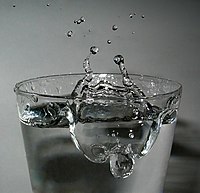 Pure water (H2O) is an example of a compound. The ball-and-stick model of the molecule shows the spatial association of two parts hydrogen (white) and one part(s) oxygen (red)

A chemical compound is a chemical substance composed of many identical molecules (or molecular entities) composed of atoms from more than one element held together by chemical bonds. A molecule consisting of atoms of only one element is therefore not a compound.

There are four types of compounds, depending on how the constituent atoms are held together:

A chemical formula specifies the number of atoms of each element in a compound molecule, using the standard abbreviations for the chemical elements and numerical subscripts. For example, a water molecule has formula H2O indicating two hydrogen atoms bonded to one oxygen atom. Many chemical compounds have a unique CAS number identifier assigned by the Chemical Abstracts Service. Globally, more than 350,000 chemical compounds (including mixtures of chemicals) have been registered for production and use.[1]

A compound can be converted to a different chemical substance by interaction with a second substance via a chemical reaction. In this process, bonds between atoms may be broken in either or both of the interacting substances, and new bonds formed.

Any substance consisting of two or more different types of atoms (chemical elements) in a fixed stoichiometric proportion can be termed a chemical compound; the concept is most readily understood when considering pure chemical substances.[2]:15 [3][4] It follows from their being composed of fixed proportions of two or more types of atoms that chemical compounds can be converted, via chemical reaction, into compounds or substances each having fewer atoms.[5] The ratio of each element in the compound is expressed in a ratio in its chemical formula.[6] A chemical formula is a way of expressing information about the proportions of atoms that constitute a particular chemical compound, using the standard abbreviations for the chemical elements, and subscripts to indicate the number of atoms involved. For example, water is composed of two hydrogen atoms bonded to one oxygen atom: the chemical formula is H2O. In the case of non-stoichiometric compounds, the proportions may be reproducible with regard to their preparation, and give fixed proportions of their component elements, but proportions that are not integral [e.g., for palladium hydride, PdHx (0.02 < x < 0.58)].[7]

There is varying and sometimes inconsistent nomenclature differentiating substances, which include truly non-stoichiometric examples, from chemical compounds, which require the fixed ratios. Many solid chemical substances—for example many silicate minerals—are chemical substances, but do not have simple formulae reflecting chemically bonding of elements to one another in fixed ratios; even so, these crystalline substances are often called "non-stoichiometric compounds". It may be argued that they are related to, rather than being chemical compounds, insofar as the variability in their compositions is often due to either the presence of foreign elements trapped within the crystal structure of an otherwise known true chemical compound, or due to perturbations in structure relative to the known compound that arise because of an excess of deficit of the constituent elements at places in its structure; such non-stoichiometric substances form most of the crust and mantle of the Earth. Other compounds regarded as chemically identical may have varying amounts of heavy or light isotopes of the constituent elements, which changes the ratio of elements by mass slightly.

A molecule is an electrically neutral group of two or more atoms held together by chemical bonds.[9][10][11][12][13] A molecule may be homonuclear, that is, it consists of atoms of one chemical element, as with two atoms in the oxygen molecule (O2); or it may be heteronuclear, a chemical compound composed of more than one element, as with water (two hydrogen atoms and one oxygen atom; H2O).

An ionic compound is a chemical compound composed of ions held together by electrostatic forces termed ionic bonding. The compound is neutral overall, but consists of positively charged ions called cations and negatively charged ions called anions. These can be simple ions such as the sodium (Na+) and chloride (Cl−) in sodium chloride, or polyatomic species such as the ammonium (NH+4) and carbonate (CO2−3) ions in ammonium carbonate. Individual ions within an ionic compound usually have multiple nearest neighbours, so are not considered to be part of molecules, but instead part of a continuous three-dimensional network, usually in a crystalline structure.

Ionic compounds containing basic ions hydroxide (OH−) or oxide (O2−) are classified as bases. Ionic compounds without these ions are also known as salts and can be formed by acid–base reactions. Ionic compounds can also be produced from their constituent ions by evaporation of their solvent, precipitation, freezing, a solid-state reaction, or the electron transfer reaction of reactive metals with reactive non-metals, such as halogen gases.

Ionic compounds typically have high melting and boiling points, and are hard and brittle. As solids they are almost always electrically insulating, but when melted or dissolved they become highly conductive, because the ions are mobilized.

London dispersion forces are the weakest force of all intermolecular forces. They are temporary attractive forces that form when the electrons in two adjacent atoms are positioned so that they create a temporary dipole. Additionally, London dispersion forces are responsible for condensing non polar substances to liquids, and to further freeze to a solid state dependent on how low the temperature of the environment is.[21]

Ionic bonding occurs when valence electrons are completely transferred between elements. Opposite to covalent bonding, this chemical bond creates two oppositely charged ions. The metals in ionic bonding usually lose their valence electrons, becoming a positively charged cation. The nonmetal will gain the electrons from the metal, making the nonmetal a negatively charged anion. As outlined, ionic bonds occur between an electron donor, usually a metal, and an electron acceptor, which tends to be a nonmetal.[22]

A compound can be converted to a different chemical composition by interaction with a second chemical compound via a chemical reaction. In this process, bonds between atoms are broken in both of the interacting compounds, and then bonds are reformed so that new associations are made between atoms. Schematically, this reaction could be described as AB + CD → AD + CB, where A, B, C, and D are each unique atoms; and AB, AD, CD, and CB are each unique compounds.