Several different ingredients can be used to form the base of a suppository: cocoa butter or a similar substitute, polyethylene glycol, hydrogels, and glycerinated gelatin. The type of material used depends on the type of suppository, the type of drug, and the conditions in which the suppository will be stored.[1] 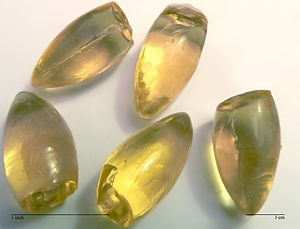 In 1991, a study on suppository insertion in The Lancet found that the "torpedo" shape helps the device to travel internally, increasing its efficacy.[2] The findings of this single study have been challenged as there is insufficient evidence on which to base clinical practice.[3]

Alprostadil pellets are urethral suppositories used for the treatment of severe erectile dysfunction. They are marketed under the name Muse in the United States of America.[4] Its use has diminished since the development of oral impotence medications.