An upturned vial of hair gel 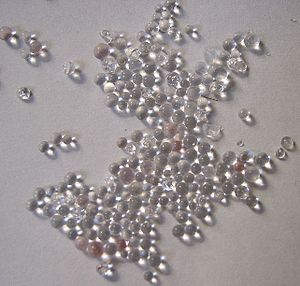 A gel is a semi-solid that can have properties ranging from soft and weak to hard and tough.[1][2] Gels are defined as a substantially dilute cross-linked system, which exhibits no flow when in the steady-state.[3] A gel has been defined phenomenologically as a soft, solid or solid-like material consisting of two or more components, one of which is a liquid, present in substantial quantity.[4]

By weight, gels are mostly liquid, yet they behave like solids because of a three-dimensional cross-linked network within the liquid. It is the crosslinking within the fluid that gives a gel its structure (hardness) and contributes to the adhesive stick (tack). In this way, gels are a dispersion of molecules of a liquid within a solid medium. The word gel was coined by 19th-century Scottish chemist Thomas Graham by clipping from gelatine.[5]

The process of forming a gel is called gelation.

Gel
Nonfluid colloidal network or polymer network that is expanded throughout its whole volume by a fluid.[6][7]
Note 1: A gel has a finite, usually rather small, yield stress.
Note 2: A gel can contain:
Note 3: Corrected from the Gold Book[9] where the definition is via the property identified in Note 1 (above) rather than of the structural characteristics that describe a gel.
Hydrogel
Gel in which the swelling agent is water.
Note 1: The network component of a hydrogel is usually a polymer network.
Note 2: A hydrogel in which the network component is a colloidal network may be referred to as an aquagel.[7]
Xerogel
Open network formed by the removal of all swelling agents from a gel.
Note: Examples of xerogels include silica gel and dried out, compact macromolecular structures such as gelatin or rubber.
Modified from the Gold Book.[10] The definition proposed here is recommended as being more explicit.[11]

Gels consist of a solid three-dimensional network that spans the volume of a liquid medium and ensnares it through surface tension effects. This internal network structure may result from physical bonds (physical gels) or chemical bonds (chemical gels), as well as crystallites or other junctions that remain intact within the extending fluid. Virtually any fluid can be used as an extender including water (hydrogels), oil, and air (aerogel). Both by weight and volume, gels are mostly fluid in composition and thus exhibit densities similar to those of their constituent liquids. Edible jelly is a common example of a hydrogel and has approximately the density of water.

Polyionic polymers are polymers with an ionic functional group. The ionic charges prevent the formation of tightly coiled polymer chains. This allows them to contribute more to viscosity in their stretched state, because the stretched-out polymer takes up more space. This is also the reason gel hardens. See polyelectrolyte for more information. 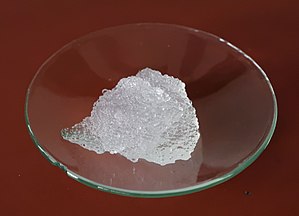 Hydrogel of a superabsorbent polymer

A hydrogel is a network of polymer chains that are hydrophilic, sometimes found as a colloidal gel in which water is the dispersion medium. A three-dimensional solid results from the hydrophilic polymer chains being held together by cross-links.[clarification needed] Because of the inherent cross-links, the structural integrity of the hydrogel network does not dissolve from the high concentration of water.[12] Hydrogels are highly absorbent (they can contain over 90% water) natural or synthetic polymeric networks. Hydrogels also possess a degree of flexibility very similar to natural tissue, due to their significant water content. As responsive "smart materials," hydrogels can encapsulate chemical systems which upon stimulation by external factors such as a change of pH may cause specific compounds such as glucose to be liberated to the environment, in most cases by a gel-sol transition to the liquid state. Chemomechanical polymers are mostly also hydrogels, which upon stimulation change their volume and can serve as actuators or sensors. The first appearance of the term 'hydrogel' in the literature was in 1894.[13]

An organogel is a non-crystalline, non-glassy thermoreversible (thermoplastic) solid material composed of a liquid organic phase entrapped in a three-dimensionally cross-linked network. The liquid can be, for example, an organic solvent, mineral oil, or vegetable oil. The solubility and particle dimensions of the structurant are important characteristics for the elastic properties and firmness of the organogel. Often, these systems are based on self-assembly of the structurant molecules.[14][15] (An example of formation of an undesired thermoreversible network is the occurrence of wax crystallization in petroleum.[16])

Organogels have potential for use in a number of applications, such as in pharmaceuticals,[17] cosmetics, art conservation,[18] and food.[19]

A xerogel /ˈzɪəroʊˌdʒɛl/ is a solid formed from a gel by drying with unhindered shrinkage. Xerogels usually retain high porosity (15–50%) and enormous surface area (150–900 m2/g), along with very small pore size (1–10 nm). When solvent removal occurs under supercritical conditions, the network does not shrink and a highly porous, low-density material known as an aerogel is produced. Heat treatment of a xerogel at elevated temperature produces viscous sintering (shrinkage of the xerogel due to a small amount of viscous flow) which results in a denser and more robust solid, the density and porosity achieved depend on the sintering conditions.

Many gels display thixotropy – they become fluid when agitated, but resolidify when resting. In general, gels are apparently solid, jelly-like materials. It is a type of non-Newtonian fluid. By replacing the liquid with gas it is possible to prepare aerogels, materials with exceptional properties including very low density, high specific surface areas, and excellent thermal insulation properties.

Some species secrete gels that are effective in parasite control. For example, the long-finned pilot whale secretes an enzymatic gel that rests on the outer surface of this animal and helps prevent other organisms from establishing colonies on the surface of these whales' bodies.[24]

Hydrogels existing naturally in the body include mucus, the vitreous humor of the eye, cartilage, tendons and blood clots. Their viscoelastic nature results in the soft tissue component of the body, disparate from the mineral-based hard tissue of the skeletal system. Researchers are actively developing synthetically derived tissue replacement technologies derived from hydrogels, for both temporary implants (degradable) and permanent implants (non-degradable). A review article on the subject discusses the use of hydrogels for nucleus pulposus replacement, cartilage replacement, and synthetic tissue models.[25]

Many substances can form gels when a suitable thickener or gelling agent is added to their formula. This approach is common in manufacture of wide range of products, from foods to paints and adhesives.

In fiber optics communications, a soft gel resembling hair gel in viscosity is used to fill the plastic tubes containing the fibers. The main purpose of the gel is to prevent water intrusion if the buffer tube is breached, but the gel also buffers the fibers against mechanical damage when the tube is bent around corners during installation, or flexed. Additionally, the gel acts as a processing aid when the cable is being constructed, keeping the fibers central whilst the tube material is extruded around it.