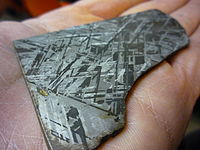 Widmanstätten pattern showing the two forms of Nickel-Iron, Kamacite and Taenite, in an octahedrite meteorite

Taenite is a mineral found naturally on Earth mostly in iron meteorites. It is an alloy of iron and nickel, with a chemical formula of Fe,Ni and nickel proportions of 20% up to 65%.

Taenite is one of four known Fe-Ni meteorite minerals: The others are kamacite, tetrataenite, and antitaenite.

It is opaque with a metallic grayish to white color. The structure is isometric-hexoctahedral. Its density is around 8 g/cm3 and hardness is 5 to 5.5 on the Mohs scale. Taenite is magnetic, in contrast to antitaenite. The crystal lattice has the c≈a= 3.582±0.002 Å.[4] The Strunz classification is I/A.08-20, while the Dana classification is 1.1.11.2 . It is hexoctahedral (cubic) in structure.