The diamond crystal structure belongs to the face-centered cubic lattice, with a repeated two-atom pattern.

In crystallography (the study of crystals), a crystal system is a set of point groups (a group of geometric symmetries with at least one fixed point). 32 point groups exist in three dimensions. Their corresponding space groups are assigned to a lattice system. Crystal systems that have space groups assigned to a common lattice system are combined into a crystal family. The seven crystal systems are triclinic, monoclinic, orthorhombic, tetragonal, trigonal, hexagonal, and cubic. Informally, two crystals are in the same crystal system if they have similar symmetries (albeit there are many exceptions).

Crystals can be classified in other ways, including crystal families and lattice systems. These make use of space groups, lattices, and point groups. The various classifications are often confused: in particular the trigonal crystal system is often confused with the rhombohedral lattice system, and the term "crystal system" is sometimes used to mean one of the others. 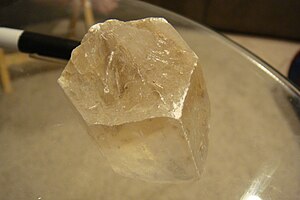 The relation between three-dimensional crystal families, crystal systems and lattice systems is shown in the following table:

Note: there is no "trigonal" lattice system. To avoid confusion of terminology, the term "trigonal lattice" is not used.

The 7 crystal systems consist of 32 crystal classes (corresponding to the 32 crystallographic point groups) as shown in the following table below:

A direction (meaning a line without an arrow) is called polar if its two-directional senses are geometrically or physically different. A symmetry direction of a crystal that is polar is called a polar axis.[2] Groups containing a polar axis are called polar. A polar crystal possesses a unique polar axis (more precisely, all polar axes are parallel). Some geometrical or physical property is different at the two ends of this axis: for example, there might develop a dielectric polarization as in pyroelectric crystals. A polar axis can occur only in non-centrosymmetric structures. There cannot be a mirror plane or twofold axis perpendicular to the polar axis, because they would make the two directions of the axis equivalent.

The distribution of the 14 Bravais lattices into lattice systems and crystal families is given in the following table.

In geometry and crystallography, a Bravais lattice is a category of translative symmetry groups (also known as lattices) in three directions.

Such symmetry groups consist of translations by vectors of the form

where n1, n2, and n3 are integers and a1, a2, and a3 are three non-coplanar vectors, called primitive vectors.

These lattices are classified by the space group of the lattice itself, viewed as a collection of points; there are 14 Bravais lattices in three dimensions; each belongs to one lattice system only. They[clarification needed] represent the maximum symmetry a structure with the given translational symmetry can have.

All crystalline materials (not including quasicrystals) must, by definition, fit into one of these arrangements.

For convenience a Bravais lattice is depicted by a unit cell which is a factor 1, 2, 3, or 4 larger than the primitive cell. Depending on the symmetry of a crystal or other pattern, the fundamental domain is again smaller, up to a factor 48.