The simplest types of chemical formulae are called empirical formulae, which use letters and numbers indicating the numerical proportions of atoms of each type. Molecular formulae indicate the simple numbers of each type of atom in a molecule, with no information on structure. For example, the empirical formula for glucose is CH2O (twice as many hydrogen atoms as carbon and oxygen), while its molecular formula is C6H12O6 (12 hydrogen atoms, six carbon and oxygen atoms).

Sometimes a chemical formula is complicated by being written as a condensed formula (or condensed molecular formula, occasionally called a "semi-structural formula"), which conveys additional information about the particular ways in which the atoms are chemically bonded together, either in covalent bonds, ionic bonds, or various combinations of these types. This is possible if the relevant bonding is easy to show in one dimension. An example is the condensed molecular/chemical formula for ethanol, which is CH3-CH2-OH or CH3CH2OH. However, even a condensed chemical formula is necessarily limited in its ability to show complex bonding relationships between atoms, especially atoms that have bonds to four or more different substituents.

A chemical formula identifies each constituent element by its chemical symbol and indicates the proportionate number of atoms of each element. In empirical formulae, these proportions begin with a key element and then assign numbers of atoms of the other elements in the compound, by ratios to the key element. For molecular compounds, these ratio numbers can all be expressed as whole numbers. For example, the empirical formula of ethanol may be written C2H6O because the molecules of ethanol all contain two carbon atoms, six hydrogen atoms, and one oxygen atom. Some types of ionic compounds, however, cannot be written with entirely whole-number empirical formulae. An example is boron carbide, whose formula of CBn is a variable non-whole number ratio with n ranging from over 4 to more than 6.5.

Condensed chemical formulae may also be used to represent ionic compounds that do not exist as discrete molecules, but nonetheless do contain covalently bound clusters within them. These polyatomic ions are groups of atoms that are covalently bound together and have an overall ionic charge, such as the sulfate [SO4]2− ion. Each polyatomic ion in a compound is written individually in order to illustrate the separate groupings. For example, the compound dichlorine hexoxide has an empirical formula ClO3, and molecular formula Cl2O6, but in liquid or solid forms, this compound is more correctly shown by an ionic condensed formula [ClO2]+[ClO4]−, which illustrates that this compound consists of [ClO2]+ ions and [ClO4]− ions. In such cases, the condensed formula only need be complex enough to show at least one of each ionic species.

Chemical formulae as described here are distinct from the far more complex chemical systematic names that are used in various systems of chemical nomenclature. For example, one systematic name for glucose is (2R,3S,4R,5R)-2,3,4,5,6-pentahydroxyhexanal. This name, interpreted by the rules behind it, fully specifies glucose's structural formula, but the name is not a chemical formula as usually understood, and uses terms and words not used in chemical formulae. Such names, unlike basic formulae, may be able to represent full structural formulae without graphs.

In chemistry, the empirical formula of a chemical is a simple expression of the relative number of each type of atom or ratio of the elements in the compound. Empirical formulae are the standard for ionic compounds, such as CaCl2, and for macromolecules, such as SiO2. An empirical formula makes no reference to isomerism, structure, or absolute number of atoms. The term empirical refers to the process of elemental analysis, a technique of analytical chemistry used to determine the relative percent composition of a pure chemical substance by element. 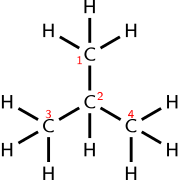 In addition to quantitative description of a molecule, a structural formula[lower-alpha 1] captures how the atoms are organized. There are multiple types of structural formulas focused on different aspects of the molecular structure.

The connectivity of a molecule often has a strong influence on its physical and chemical properties and behavior. Two molecules composed of the same numbers of the same types of atoms (i.e. a pair of isomers) might have completely different chemical and/or physical properties if the atoms are connected differently or in different positions. In such cases, a structural formula is useful, as it illustrates which atoms are bonded to which other ones. From the connectivity, it is often possible to deduce the approximate shape of the molecule.

A condensed (or semi-structural) formula may represent the types and spatial arrangement of bonds in a simple chemical substance, though it does not necessarily specify isomers or complex structures. For example, ethane consists of two carbon atoms single-bonded to each other, with each carbon atom having three hydrogen atoms bonded to it. Its chemical formula can be rendered as CH3CH3. In ethylene there is a double bond between the carbon atoms (and thus each carbon only has two hydrogens), therefore the chemical formula may be written: CH2CH2, and the fact that there is a double bond between the carbons is implicit because carbon has a valence of four. However, a more explicit method is to write H2C=CH2 or less commonly H2C::CH2. The two lines (or two pairs of dots) indicate that a double bond connects the atoms on either side of them.

A triple bond may be expressed with three lines (HC≡CH) or three pairs of dots (HC:::CH), and if there may be ambiguity, a single line or pair of dots may be used to indicate a single bond.

Molecules with multiple functional groups that are the same may be expressed by enclosing the repeated group in round brackets. For example, isobutane may be written (CH3)3CH. This condensed structural formula implies a different connectivity from other molecules that can be formed using the same atoms in the same proportions (isomers). The formula (CH3)3CH implies a central carbon atom connected to one hydrogen atom and three CH3 groups. The same number of atoms of each element (10 hydrogens and 4 carbons, or C4H10) may be used to make a straight chain molecule, n-butane: CH3CH2CH2CH3.

In any given chemical compound, the elements always combine in the same proportion with each other. This is the law of constant composition.

Chemical names in answer to limitations of chemical formulae

The alkene called but-2-ene has two isomers, which the chemical formula CH3CH=CHCH3 does not identify. The relative position of the two methyl groups must be indicated by additional notation denoting whether the methyl groups are on the same side of the double bond (cis or Z) or on the opposite sides from each other (trans or E).[3]

As noted above, in order to represent the full structural formulae of many complex organic and inorganic compounds, chemical nomenclature may be needed which goes well beyond the available resources used above in simple condensed formulae. See IUPAC nomenclature of organic chemistry and IUPAC nomenclature of inorganic chemistry 2005 for examples. In addition, linear naming systems such as International Chemical Identifier (InChI) allow a computer to construct a structural formula, and simplified molecular-input line-entry system (SMILES) allows a more human-readable ASCII input. However, all these nomenclature systems go beyond the standards of chemical formulae, and technically are chemical naming systems, not formula systems.

For polymers in condensed chemical formulae, parentheses are placed around the repeating unit. For example, a hydrocarbon molecule that is described as CH3(CH2)50CH3, is a molecule with fifty repeating units. If the number of repeating units is unknown or variable, the letter n may be used to indicate this formula: CH3(CH2)nCH3.

For ions, the charge on a particular atom may be denoted with a right-hand superscript. For example, Na+, or Cu2+. The total charge on a charged molecule or a polyatomic ion may also be shown in this way. For example: H3O+ or SO42−. Note that + and - are used in place of +1 and -1, respectively.

For more complex ions, brackets [ ] are often used to enclose the ionic formula, as in [B12H12]2−, which is found in compounds such as Cs2[B12H12]. Parentheses ( ) can be nested inside brackets to indicate a repeating unit, as in [Co(NH3)6]3+Cl3−. Here, (NH3)6 indicates that the ion contains six NH3 groups bonded to cobalt, and [ ] encloses the entire formula of the ion with charge +3.

This is strictly optional; a chemical formula is valid with or without ionization information, and Hexamminecobalt(III) chloride may be written as [Co(NH3)6]3+Cl3− or [Co(NH3)6]Cl3. Brackets, like parentheses, behave in chemistry as they do in mathematics, grouping terms together – they are not specifically employed only for ionization states. In the latter case here, the parentheses indicate 6 groups all of the same shape, bonded to another group of size 1 (the cobalt atom), and then the entire bundle, as a group, is bonded to 3 chlorine atoms. In the former case, it is clearer that the bond connecting the chlorines is ionic, rather than covalent.

Although isotopes are more relevant to nuclear chemistry or stable isotope chemistry than to conventional chemistry, different isotopes may be indicated with a prefixed superscript in a chemical formula. For example, the phosphate ion containing radioactive phosphorus-32 is [32PO4]3−. Also a study involving stable isotope ratios might include the molecule 18O16O.

A left-hand subscript is sometimes used redundantly to indicate the atomic number. For example, 8O2 for dioxygen, and 168O2 for the most abundant isotopic species of dioxygen. This is convenient when writing equations for nuclear reactions, in order to show the balance of charge more clearly. 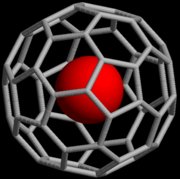 The @ symbol (at sign) indicates an atom or molecule trapped inside a cage but not chemically bound to it. For example, a buckminsterfullerene (C60) with an atom (M) would simply be represented as MC60 regardless of whether M was inside the fullerene without chemical bonding or outside, bound to one of the carbon atoms. Using the @ symbol, this would be denoted M@C60 if M was inside the carbon network. A non-fullerene example is [As@Ni12As20]3−, an ion in which one As atom is trapped in a cage formed by the other 32 atoms.

This notation was proposed in 1991[4] with the discovery of fullerene cages (endohedral fullerenes), which can trap atoms such as La to form, for example, La@C60 or La@C82. The choice of the symbol has been explained by the authors as being concise, readily printed and transmitted electronically (the at sign is included in ASCII, which most modern character encoding schemes are based on), and the visual aspects suggesting the structure of an endohedral fullerene.

Chemical formulae most often use integers for each element. However, there is a class of compounds, called non-stoichiometric compounds, that cannot be represented by small integers. Such a formula might be written using decimal fractions, as in Fe0.95O, or it might include a variable part represented by a letter, as in Fe1–xO, where x is normally much less than 1.

A chemical formula used for a series of compounds that differ from each other by a constant unit is called a general formula. It generates a homologous series of chemical formulae. For example, alcohols may be represented by the formula CnH(2n + 1)OH (n ≥ 1), giving the homologs methanol, ethanol, propanol for n=1–3.

By sorting formulae according to the number of atoms of each element present in the formula according to these rules, with differences in earlier elements or numbers being treated as more significant than differences in any later element or number—like sorting text strings into lexicographical order—it is possible to collate chemical formulae into what is known as Hill system order.

The Hill system was first published by Edwin A. Hill of the United States Patent and Trademark Office in 1900.[5] It is the most commonly used system in chemical databases and printed indexes to sort lists of compounds.[6]

A list of formulae in Hill system order is arranged alphabetically, as above, with single-letter elements coming before two-letter symbols when the symbols begin with the same letter (so "B" comes before "Be", which comes before "Br").[6]

The following example formulae are written using the Hill system, and listed in Hill order: