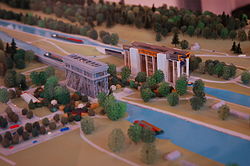 Structures such as the Niederfinow Boat Lift limit the dimensions of vessels. (As of 2012) a second lift is being constructed to a larger size.

The Classification of European Inland Waterways is a set of standards for interoperability of large navigable waterways forming part of the Trans-European Inland Waterway network within Continental Europe and Russia. It was created by the European Conference of Ministers of Transport (ECMT; French: Conférence européenne des ministres des Transports, CEMT) in 1992,[1] hence the range of dimensions are also referred to as CEMT Class I–VII.

The size for each waterway is limited by the dimensions of the structures including the locks and boat lifts on the route.

Class I corresponds to the historical Freycinet gauge decreed in France during 1879. The larger river classification sizes are focused on the carriage of intermodal containers in convoys of barges propelled by a push-tug. Most of the canals of the United Kingdom have smaller locks and would fall below the dimensions in the European classification system. In 2004, the standards were extended with four smaller sizes RA–RD covering recreational craft, which had originally been developed and proposed via PIANC.[2] The proposal to add the recreational sizes was adopted by United Nations Economic Commission for Europe resolution 52.[3][4] In 2015 an updated version was published.[5]

Publications including the full classification table