A variety of symbols or iconographic conventions are used to represent Earth, either in the sense of planet Earth, or the inhabited world. Representations of the globe of Earth, either with an indication of the shape of the continents or with a representation of meridians and parallels remains a common pictographic convention to express the notion of "worldwide, global". The modern astronomical symbol for Earth as a planet uses either a stylized globus cruciger (♁) or a circle with a cross (representing the equator and one meridian; (🜨).[1][2] 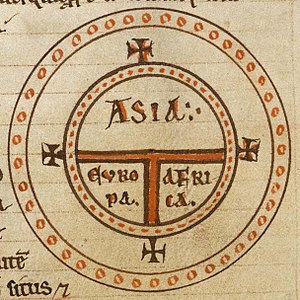 12th-century T-and-O representation of the world.

The earliest type of symbols are allegories, personifications or deifications, mostly in the form of an Earth goddess (in the case of Egyptian mythology a god, Geb).

Before the recognition of the spherical shape of the Earth in the Hellenistic period, the main attribute of the Earth was its being flat. The Egyptian hieroglyph for "earth, land" depicts a stretch of flat alluvial land with grains of sand (Gardiner N16 <hiero>N16</hiero>). Similarly, the Sumerian cuneiform sign for "earth" KI (𒆠 U+121A0) originates as a picture of a "threshing floor".

The classical element "Earth" is represented by the trigram of three broken lines in the I Ching (☷ U+2637). The Western (early modern) alchemical symbol is a downward-pointing triangle bisected by a horizontal line. Other symbols for the earth in alchemy or mysticism include the square and the serpent.[3]

In the Roman period, the globe, a representation of the spherical Earth, became the main symbol representing the concept. The globe depicted the "universe" (pictured as the celestial sphere) as well as the Earth. The globus cruciger is the globe surmounted by a Christian cross, held by Byzantine Emperors on the one hand to represent the Christian ecumene, on the other hand the Akakia represented the mortal nature of all men. In the medieval period, the known world was also represented by the T-and-O figure, representing an extremely simplified world map of the three classical continents of the Old World, viz. Asia, Europe and Africa.

Byzantine Emperor Alexander, holding the akakia in his left hand (on the righthand side of the image). Mosaic from the Hagia Sophia.

Unicode has introduced a four characters representing the "globe" in the Miscellaneous Symbols and Pictographs block: