The Bell X-2 (nicknamed "Starbuster"[1]) was an X-plane research aircraft built to investigate flight characteristics in the Mach 2–3 range. The X-2 was a rocket-powered, swept-wing research aircraft developed jointly in 1945 by Bell Aircraft Corporation, the United States Air Force and the National Advisory Committee for Aeronautics (NACA) to explore aerodynamic problems of supersonic flight and to expand the speed and altitude regimes obtained with the earlier X-1 series of research aircraft.

The Bell X-2 was developed to provide a vehicle for researching flight characteristics at speeds and altitudes in excess of the capabilities of the Bell X-1 and D-558 II, while investigating aerodynamic heating problems in what was then called the "thermal thicket".[2]

The Bell X-2 had a prolonged development period due to the advances needed in aerodynamic design, control systems, materials that retained adequate mechanical properties at high temperature, and other technologies that had to be developed. Not only did the X-2 push the envelope of manned flight to speeds, altitudes and temperatures beyond any other aircraft at the time, it pioneered throttleable rocket motors in U.S. aircraft (previously demonstrated on the Me 163B during World War II) and digital flight simulation.[3] The XLR25 rocket engine, built by Curtiss-Wright, was based on the smoothly variable-thrust JATO engine built by Robert Goddard in 1942 for the Navy.[4]

Providing adequate stability and control for aircraft flying at high supersonic speeds was only one of the major difficulties facing flight researchers as they approached Mach 3. For, at speeds in that region, they knew they would also begin to encounter a "thermal barrier", severe heating effects caused by aerodynamic friction. Constructed of stainless steel and a copper-nickel alloy, K-Monel, and powered by a liquid propellant (alcohol and oxygen) two-chamber XLR25 2,500 to 15,000 lbf (11 to 67 kN) sea level thrust, continuously throttleable rocket engine, the swept-wing Bell X-2 was designed to probe the supersonic region.[3] 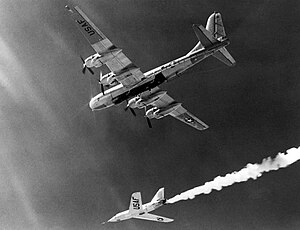 X-2 just after being dropped

Following a drop launch from a modified B-50 bomber, Bell test pilot Jean "Skip" Ziegler completed the first unpowered glide flight of an X-2 at Edwards Air Force Base on 27 June 1952. Ziegler and aircraft #2 (46-675) were subsequently lost on 12 May 1953, in an inflight explosion during a captive flight intended to check the aircraft's liquid oxygen system.[1][5] A B-50 crew member, Frank Wolko, was also killed during the incident. The wreckage of the aircraft fell into Lake Ontario and was not recovered.[6]

Lt. Col. Frank K. "Pete" Everest completed the first powered flight in the #1 airplane (46-674) on 18 November 1955. By the time of his ninth and final flight in late July 1956 the project was years behind schedule, but he had established a new speed record of Mach 2.87 (1,900 mph, 3050 km/h). About this time, the YF-104A was demonstrating speeds of M = 2.2 or 2.3 in a fighter configuration. The X-2 was living up to its promise, but not without difficulties. At high speeds, Everest reported its flight controls were only marginally effective. High speed center of pressure shifts along with fin aeroelasticity were major factors. Moreover, simulation and wind tunnel studies, combined with data from his flights, suggested the airplane would encounter very severe stability problems as it approached Mach 3.[7]

The flight had been flawless to this point, but, for some reason, shortly after attaining top speed, Apt attempted a banking turn while the aircraft was still above Mach 3 (lagging instrumentation may have indicated he was flying at a slower speed or perhaps he feared he was straying too far from the safety of his landing site on Rogers Dry Lake). The X-2 tumbled violently out of control and he found himself struggling with three sequential coupling modes, control coupling, inertial roll coupling and supersonic spinning.[8] "Inertia coupling" and a subsonic inverted spin[9] had overtaken Chuck Yeager in the X-1A nearly three years before. Yeager, although exposed to much higher vehicle inertial forces, as a result of extensive experience flying the X-1 was very familiar with its character, and was able to recover. Apt attempted to recover from a spin, but could not. He fired the ejection capsule, which was itself only equipped with a relatively small drogue parachute. Apt was probably disabled by the severe release forces. As the capsule fell for several minutes to the desert floor, he did not exit so that he could use his personal parachute before ground impact, and was killed.[10] The aircraft continued to fly in a series of glides and stalls before landing with minimal damage. A proposal to salvage the aircraft and modify it for a hypersonic test program was not approved. The aircraft was scrapped.[11] 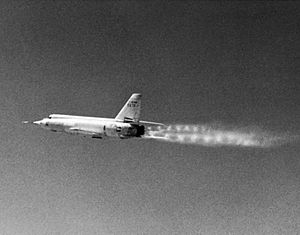 This shows the twin set of shock diamonds, characteristic of supersonic conditions in the exhaust plume from the two-chamber rocket engine

While the X-2 had delivered valuable research data on high-speed aerodynamic heat build-up and extreme high-altitude flight conditions (although it is unclear how much, as the Lockheed X-7 and IM-99 were among the winged vehicles operating at comparable or higher velocities in this era), this tragic event terminated the program before the National Advisory Committee for Aeronautics could commence detailed flight research with the aircraft. The search for answers to many of the riddles of high-Mach flight had to be postponed until the arrival three years later of the most advanced of all the experimental rocket aircraft, the North American X-15.